On 26th August, the Konrad-Adenauer Stiftung Uganda and South Sudan, in cooperation with the University Fo-rum for Governance (UNIFOG) organized a full-day symposium on possibilities for peace and inclusive state-building in South Sudan. Reflecting on practical proposals for solutions and feasible actions to improve on the sit-uation in Uganda’s northern neighbour-state, there was clearly one key question that came to dominate the debate: the question of foreign inter-vention.
December 6, 2016 Ordering Information

While one group of participants stated that foreign intervention would only cause additional challenges to the country and that one would have to let the parties fight until one finally surrenders, the majority of scholars involved clearly declared that the humanitarian costs for this approach would simply be too high and advocated strongly for a foreign intervention in South Sudan. Concerning the issue of where such an intervention should stem from, opinions among the participants again diverged.

The following question therefore arises: should there be a foreign intervention into South Sudan to save lives and tackle the crisis? And if so, of what nature should this intervention be and what actors should get involved?

With bringing up this topic, the panellists of the first South Sudan-Symposium touched upon an issue intensively debated in political science and international rela-tions. Widely referred to as the use of the discretionary power of a nation-state or another geopolitical institution to address perceived problems in foreign societies, foreign interventions “aim to construct a preferable state of affairs in these societies from the standpoint of those intervening”1. The conceptualization of intervention in this analysis is broad and includes both co-ercive/military forms of intervention, and non-military/consensual forms of inter-vention.

The country report was written by Leonie Staas and Marius Hupperich who where both interning at the KAS country office for Uganda and South Sudan in 2016. 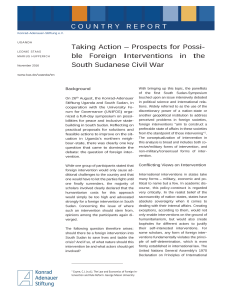