by Yusuf Kiranda
On 1st February, the Ugandan Constitutional Court officially banned about 70 candidates from contesting in the upcoming elections – among them popular political figures including some ministers of the current cabinet. The ruling affects all those candidates – mainly for seats in parliament – who are running on a platform different from the party ticket through which they got their current seats.
February 4, 2011 Ordering Information

While official reactions have not yet been communicated, the ruling will significantly affect the dynamics in the forefront of the elections which are scheduled for 18th February.

Since the reintroduction of multiparty democracy in Uganda 2005, adherence to multiparty principals has at times eluded the political process. Uganda in this regard still has a number of challenges to overcome. Significant among them is the high rate of defections - including elected officials - from political parties and a high number of independents in both parliament and local councils. Summarily, Uganda still faces an “individual merit” situation, a principal that characterised the monolithic movement system. Under the circumstance, a number of politicians do not take serious their party membership.

While it is difficult to judge the individual motivations, taking into consideration the right of elected officials to exercise self conscience and put first the interests of their constituents, incidents of politicians disrespecting and conflicting with party positions appear relatively high. There are also sporadic defections among leaders holding elective offices on a party ticket. This phenomenon has kept all political parties in a generally weak and dependant position.

The recent ruling by the Constitutional Court can be seen as a landmark development, in particular towards strengthening the adherence to multiparty principals and, in general, strengthening the multiparty system. The Constitutional Court has declared as “invalid, null and void” the nomination of about 70 (mainly) parliamentary candidates contesting for the February 18 polls on a platform different from the party ticket upon which they hold their current seats. The court further ruled that they have to quit their current seats.

It is to be observed that towards the 2011 elections, several incumbent MPs and local government leaders have moved to seek re-election on platforms different from their existing party membership and without initially resigning from the seats they currently hold. This has mainly been the case with: 1) candidates who are members of parliament and who defected from their initial political parties and are now running for election under a different party; 2) incumbents (currently serving on a party ticket) who lost in the party primaries and are campaigning as independents; and 3) those currently serving in parliament as independents but who participated in party primaries and are now running for re-election on a party ticket. This ruling will affect candidates at all the electoral levels: presidential, parliamentary and local government.

Although the ruling comes less than three weeks to the polls it is expected to have some serious implications to the election exercise. There is the chance that Uganda can enhance its record on multiparty competition when the number of independents and individual merit tendencies are reduced. Party discipline is likely to improve and party primaries as vital components of the electoral cycle can start to be more respected in terms of process and outcomes. Ultimately, the ruling is likely to lead to more leverage of the parties over their members – which is essential for building stronger parties as pillars of the democratic system.

It is yet to be seen how other relevant state organs, in particular the parliament and the Electoral Commission will move in regard to this ruling. A response from the two bodies was not available days after the ruling and 15 days to the polls. Whatever response they take will be a litmus test for the respect of constitutionalism and the rule of law on the part of Uganda’s democratic institutions. 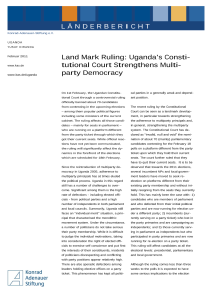