Providing a Platform for Political Engagement at Makerere University

After a successful first guild debate on the 26th of March 2017, KAS, UNIFOG in partnership with the Makerere guild electoral commission organized a second Guild Debate on the 2nd of April 2017 at Makerere University Main Hall. This was to further our support to building accountable leaders who espouse democratic values as student leaders quite often translate into national leaders.
April 6, 2017 Ordering Information

This year, the race for the Makerere guild office has attracted up to 14 candidates with only three females contesting. The candidates include Agadi Lulican, Isabirye Kenneth, Bukomeko Stephen, Kizito Emmanuel Luwukya, Kihika Henry, Karamagi William, Lakisa Mercy Faith, Nampande Ruth Nsubuga, Alituha Doreen, Kato Paul, Sambwa Timothy, Ziritwaula Abdu Kareem, Ssentale Andrew and Kazungu James. The debate was structured into four session with the first sessions candidates are given time to explain their manifestos, in the second session candidates answered to questions from the moderator, in the third session candidates ask each other questions before answering to questions from the audience. The debate was moderated by a renowned journalist and broadcaster at NTV Uganda Joel Senyonyi.

To start the debate, each candidate was given three minutes to explain their manifestos to the students/electorates. In their introductory statement, candidates focused on how they will solve the challenges that face students at Makerere University when voted into office with much emphasis on student welfare and the unfair fees policies. Candidates mostly mentioned the poor university management and the gap the exists between management and the students as the root cause of students’ plight at the university. Thus, most candidates promised to advocate for increased student participation in the decision-making process, improved students’ welfare and security.

The second session had the guild candidates answering to the questions from the moderator. To differ from the first debate where questions focused on university politics, this time around questions were mostly on nation issues especially youth in national politics and development.

On the issue of the major challenges to national democracy, Candidate Kato argued that the thin line between the ruling NRM party and the government has greatly affected the promotion of democratic values since the party itself isn’t democratic. He called for the separation of the party politics from the state and creation a fair playing ground for all the political parties in the country. While Agadi urged the government to create more platforms for the youth to constructively engage in national politics and development.

He pointed out that the available platforms have not effectively represented the youth hence more youth need to be included in the government structures. He was responding to the question of ineffective youth participation in the national politics. Candidate Lakisa stated the need to address the patriarchal nature of our society if more women must effectively participate in national politics and development.

Lakisa argued women to lead the initiatives that will see them fairy compete with the male in the political circles. On the same issue of women participation, Sambwa noted that women have been socially disenfranchised for so long calling for more affirmative actions to end the male dominance.

As a young leader who understands the challenges the youth face, Bukomeko argued for a change in the education curriculum to include more practical skills to enable the youth to start up income generating activities other than waiting for jobs – a practice that has increased unemployment cases among the youth. He was answering to the question of youth unemployment. While asked about the relevance of political parties in University politics, candidate Kato argued that the university politics reflects the national politics and since political parties are pertinent to our democracy, students should belong to political parties and pursue their leadership aspirations within the parties’ ideological base. 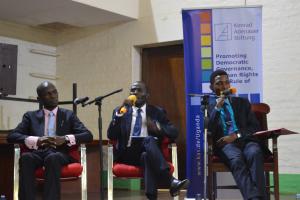 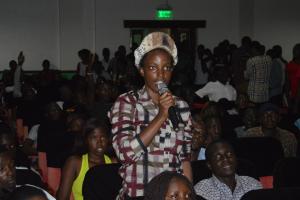 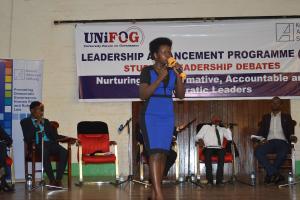 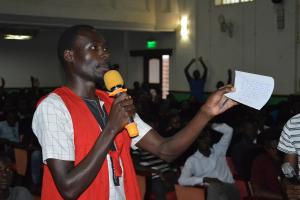 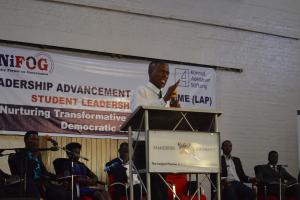