On November 8-11, 2011, the Konrad Adenauer Stiftung in Washington, DC, welcomed a delegation that included representatives of laRED, a network of think tanks focused on regional security issues in Central America, and Tjark Egenhoff, director of the KAS Guatemala office. The discussions and relationships formed from the meetings will aid laRED in its ongoing research for an upcoming policy paper on money laundering that the group hopes to finalize in January 2012. The laRED members talked to U.S. experts about the fact that Central America is one of most violent regions in world. They have observed that organized crime is becoming institutionalized, a phenomenon that threatens the survival and stability of the democratic state. On the specific issue of money laundering, laRED has found that mayors and members of parliaments are most opposed to finding solutions because they themselves are corrupted by organized crime. And in local governments, there often is a problem with lack of information and transparency. In states where there is good legislation in place, they have found a lack of implementation.

KAS partnered with the Woodrow Wilson International Center for Scholars to present the group’s preliminary research findings on Wednesday, December 9. More than 60 attendees from foreign embassies, U.S. agencies, think tanks, academic institutions and the business community, as well as members of the media, attended the luncheon discussion to hear about laRED’s work. LaRED coordinator and former Guatemalan Vice President Eduardo Stein explained how the network formed to capitalize on each organization’s expertise in security issues. Their initial report on organized crime and regional security challenges led them to pursue the issue of money laundering as a way to combat one of the most important tools of crime networks – legitimization of illegal gains via money laundering. The delegation explained that organized crime is the most destabilizing factor in Central America, but there is reluctance by government bodies to pass civil asset forfeiture laws because of the burden of proof required and the practical challenges of dealing with seized materials.

After the presentation, a sometimes spirited Q&A segment took place. Members of the audience pointed out that the U.S. Department of Justice and Attorneys General in states have the responsibility and authority to close banks in the U.S. that have any role in laundering money. A representative from the U.S. Department of State questioned the willingness of Central American governments to look at the issue in their own countries and pass laws to address the issue. Despite their willingness to work on the issue, elected officials at a municipal level face difficulties in addressing security issues because of the danger posed by organized crime units. While those threats are less common at the federal level, elected officials there have less desire to pass legislation that could have an impact. In response to a question regarding the role of local governments, it was pointed out that the Konrad Adenauer Stiftung has a role to play in bringing policy makers together to discuss these issues.

Throughout their program, the delegation members shared their views on the importance of KAS’s involvement and support of laRED. The group related how the formation of laRED allowed them to look at the problem from a regional perspective rather than from their individual country’s perspectives. This is crucial to the group’s goals of instituting uniform procedures and standards in the region to prevent havens for money laundering and other activities associated with organized crime.

Although the delegation was in the U.S. capital for less than 72 hours, the program included meetings with Obama Administration officials, Central American Ambassadors to the U.S. and Organization of American States, representatives of the U.S. Congress, international organizations with expertise in security issues, members of the academic community, and representatives of respected think tanks. 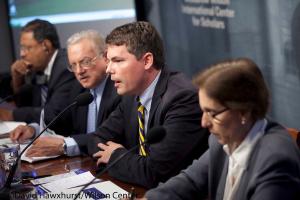 Wilson Center
Tjark Egenhoff, director of the KAS Guatemala office, addresses a question from an audience member at a public forum to discuss money laundering in Central America. He was joined on the panel by Enrique Saenz and Eduardo Stein of the laRED think tank network. Cindy Arnson of the Woodrow Wilson International Center for Scholars moderated the discussion.