Transatlantic Approaches: Europe in an Age of Sino-American Competition

Please join Hudson Institute and the Konrad-Adenauer-Stiftung (KAS) for a discussion on Sino-European relations and prospects for transatlantic cooperation on key challenges relating to China.

Leadership, Succession Planning, and its Implications for Germany's Role in the World

CSIS-KAS Series: Germany at the End of the Merkel Era

U.S. Elections and Its Implications for Transatlantic Relations

How the Pandemic impacts the News Media

How to Reinvigorate and Further Strengthen the Transatlantic Partnership?

The Rise of the Millennial and Minority Vote

KAS USA will again participate in the European Student Conference (ESC) 2020, the annual meeting of KAS scholarship holders studying in the USA and participating in the conference. 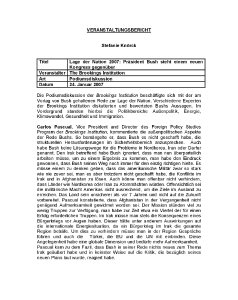 The panel discussion organized by the Brookings Institution analyzed the President’s State of the Union Address, which he had delivered the previous day. Various experts of the Brookings Institution discussed and evaluated the President’s statements. Of most interest were the topics foreign policy, energy, global warming, health care and immigration. (Summary in German) 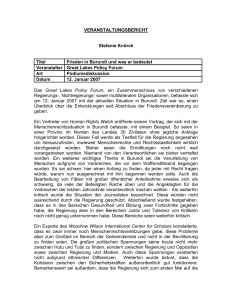 Burundi at Peace: What does it mean?

The Great Lakes Policy Forum, a coalition of governmental, nongovernmental and multilateral organizations, discussed the current situation in the state of Burundi. The intention was to inform about the developments in the country since the peace agreement was reached. (Summary in German) 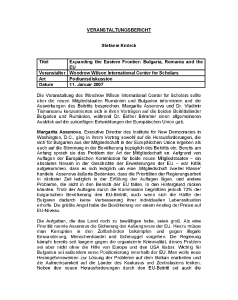 Bulgaria, Romania and the EU

The event of the Woodrow Wilson International Center for Scholars informed the participants about the new member states of the European Union - Bulgaria and Romania – and the implications for both the two countries and the European Union. In their lectures, Margarita Assenova and Dr. Vladimir Tismaneanu concentrated on the situation in their respective countries, while Dr. Esther Brimmer discussed the future development of the European Union as a whole. (Summary in German) 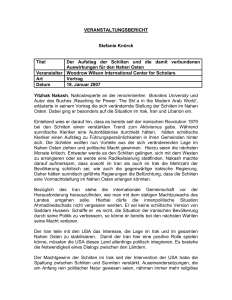 The Rise of the Shiites

Implications for the Middle East

In his lecture, Yitzhak Nakash, Middle East expert at the Brandeis University and author of the book "Reaching for Power: The Shi`a in the Modern Arab World", discussed the changing position of the Shiites in the Middle East. He focused especially on the situation in Iraq, Iran and Lebanon. (Summary in German) 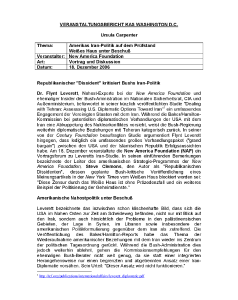 In a recently published study, Dr. Flynt Leverett, Senior Fellow at the New America Foundation and former insider of the Bush administration in the NSC, CIA and State Department, promotes a comprehensive engagement of the United States with Iran. The criticism of the “Republican dissident” of the White House stirred a controversy in Washington. (Summary in German) 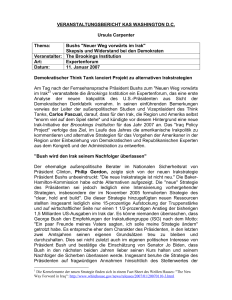 Immediately following its announcement, President Bush’s new strategy in Iraq encountered wide-ranging rejection and skeptical reactions in his own country. A prestigious Democratic think tank hosted a panel discussion with renowned foreign policy experts to present a first analysis of the new Iraq policy, particularly of its echo among the Democrats in Congress.(Summary of event in German) 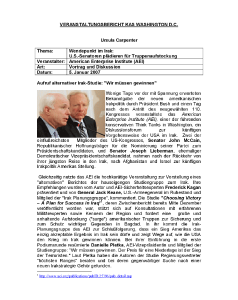 On the eve of President Bush’s much anticipated announcement of his new policy on the war in Iraq and one day after the convening of the newly elected Congress, the American Enterprise Institute (AEI), one of the leading conservative think tanks in Washington, hosted a podium discussion on the future progress of the United States in Iraq. Two of the most influential Members of Congress, Senator John McCain, in line for his party’s nomination as the Republican presidential candidate, and Senator Joseph Lieberman, former Democratic Vice Presidential candidate, shared their assessments of America’s future Iraq policy after their return from a recent trip to Iraq, Afghanistan, and Israel.(Attached summary is in German.) 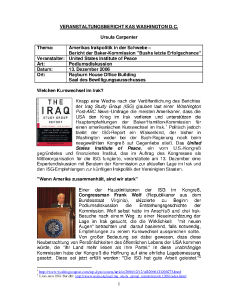 Barely a week after the release fo the ISG report, most Americans believe that the United States is losing the war in Iraq and support the main elements of the Baker-Hamilton Commission for a new strategy in Iraq, according to a recent Washington Post-ABC News poll. Politically, however, the commission’s report remains a political orphan with little support from the Bush administration and Congress.(Attached summary is in German.) 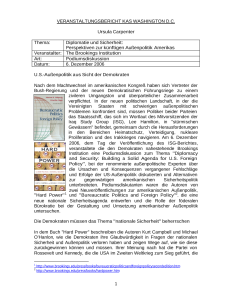 Diplomacy and Security: Perspectives on the Future Direction of U.S. Foreign Policy

The Bush administration and the newly elected Democratic congressional leadership have pledged civility and bipartisanship in a new political landscape in which they must tackle difficult foreign policy issues. On December 6, 2006, the day of the release of the Iraq Study Group report, the Brookings Institution hosted a panel discussion with foreign policy experts to examine the causes and consequences of past foreign policy failures and successes, and offer alternatives to current national security policy.(Summary in German) 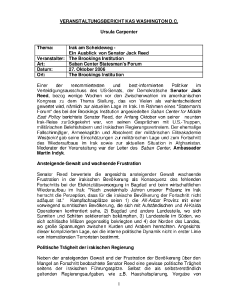 Iraq at the crossroads

An outlook by Senator Jack Reed

On the eve of the congressional midterm elections, one of the most well-regarded and best informed policymakers in the Senate Armed Services Committee, Democratic Senator Jack Reed, shared his perspectives on an issue that many consider to be critical, if not decisive: the current situation in Iraq... (Attached document is in German)