50 years of Diplomatic Relations between Germany and Israel

A Conference with panel discussions on past, present and future German-Israeli relations

Seventy Years after the end of the Second World War and the Holocaust one encounters unique and positive relations between Israel and Germany as numerous International participants reiterated at the Conference “Fifty Years after the Establishment of Diplomatic Relations – are German-Israeli relations still special?“, organized by the Konrad Adenauer Foundation in Washington D.C.
July 15, 2015 Ordering Information 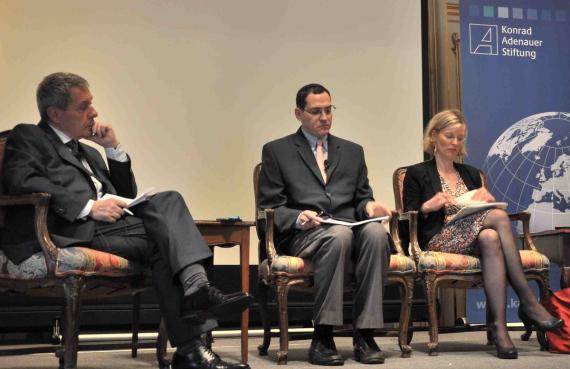 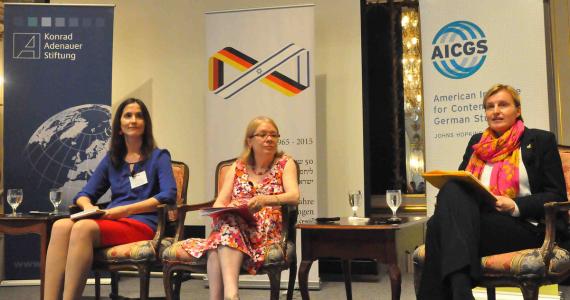 Through numerous examples, the speakers illustrated that the relationship between the two countries has a fixed position, not only in the world of politics but it is deeply rooted in mutual encounters, such as exchange and travel, with the prospect of staying for upcoming generations.

On March 14, 1960, the first meeting between the two statesmen Konrad Adenauer and David Ben Gurion took place at the Waldorf Astoria in New York. Historians point to this encounter when they suggest that it granted the possibility of an unprecedented understanding and subsequent reconciliation between the peoples of Israel and Germany.

Together with the Luxembourg Agreement of 1952, the first step for cooperation after the Second World War, the conversation between Adenauer and Ben-Gurion was a milestone in fostering an open and positive relationship between Israel and Germany. It took another five years after this remarkable encounter before the diplomatic relations became official, lasting for over 50 years to this day. Since then, many steps have been taken to ensure that the spirit of the historically significant event is kept alive through the help of observers and companions. In a speech to the Knesset, Chancellor Merkel stressed that Israel's security is part of German raison d'état - an utterance recalled several times the by the guests.

The conference was organized by KAS in close cooperation with the American Institute for Contemporary German Studies (AICGS) and the Action Reconciliation Service for Peace (ASF) in the U.S. The speakers and panelists outlined the current state of relations, its uniqueness perfectly depicted by Israeli writer Amos Oz: "Normal relations can exist between Norway and New Zealand or between Uruguay and Sri Lanka. Between Germany and the Jewish people, for over two hundred years ambivalent relationships exist, intense, deep and hurt, complicated and multi-faceted relations. No normal relations. And that goes for future relationships.”

At the beginning of the conference the former German ambassador to Israel Harald Kindermann analyzed the relationship of both countries, linking his personal experiences with current political events. He portrayed his role as the German Ambassador to Israel as one strongly shaped by emotions as Israel and Germany shared a special, healthy, grounded relationship bound together through mutual interest.

Ambassador Kindermann noted that topics such as the personal guilt of Germans and personal experience of the Holocaust on the Israeli side were still very present in his generation, amplifying the emotional side of his line of work.

He noted that this would change in the next generation, as the platform of the Israeli- German relationship has developed into the right direction. This progress is reflected visibly in the strong engagement of partner cities, travel and Student exchange programs in both nations.

The first round of discussion following Kindermann’s opening speech consisted of an exchange of Israel’s public opinion towards Germany and vice versa, which the panelists discussed and analyzed heavily.

In a spring study, the Konrad-Adenauer-Foundation revealed that the Israeli opinion of Germany was positive, many seeking a particularly close relationship.

Mitchell Barak of KEEVON Global Research reiterated this finding at the conference and stressed that in particular the Israeli intellectual elite view Germany in a positive light- although the Holocaust remains present, it does so not in terms of the past but in terms of a possible event in the future (Barak recalls at this point the remarks by Israeli politicians to Iran). The longer the panelists discussed the role of Germany as a global actor, the more the remarks were shaped by a positive view. By the end of the discussion round, positive remarks had gained more weight than negative ones. On the political level, the panelists praised Angela Merkel's role as a strong leader whose reputation has increased substantially in recent years.

Among the EU member States, Germany is viewed as the most Israel friendly - a welcoming atmosphere reflected in the number of Israelis visiting the nation, as more than half of the Israeli population has traveled to Germany. Another interesting finding surfaced, that stated that among various societal enclaves results varied. Among the more religious individuals, findings showed a more negative attitude towards Germany than among less religious ones and older members of the Israeli population tend to view Germany as more positive than younger ones.

As the Conference progressed, the international context of topics was discussed and the trilateral relationship between Israel, USA and Germany addressed through current political issues. In a panel moderated by Lily Gardner Feldman, who played a key role in bringing the idea of the event to life through her organizational efforts, Eric Fusfield from B’nai B’rith International, Michael Borchard from the KAS Office in Jerusalem and Jeffrey Herf of the University of Maryland addressed complex questions concerning the changing U.S-Israeli relationship and its perception in the relevant nations.

As the conference, which gave a platform to high ranking foreign service representatives from both nations, neared its end, young representatives had the ability to voice their opinion. Moderated by Dr. Dagmar Pruin, CEO of Action Reconciliation Service for Peace (ASF) and Germany Close Up - American Jews meet Modern Germany, the Israeli Political Scientist Hadas Cohen, the former Director of Israel Office of Action Reconciliation Service for Peace Katharina von Muenster and Lily Gardner Feldman debated the role that civil society plays in shaping the German Israeli.

Gardner Feldman addressed that civil society actors such as Action Reconciliation Service for Peace played a role as catalyzers for the ever increasing relationship between Israel and Germany in the past and will continue to play a significant role in fostering this relationship in the future.

Katharina von Muenster described the returning volunteers from Action Reconciliation for Peace as “ Ambassadors of Remembrance“ and “Ambassadors of Israel”, who, upon return, portray Israel as a diverse, culturally rich and proud nation. Hadas Cohen, graduate of the Germany Close Up program, who lives in Berlin to interview Israelis about their move to the capital, mentioned a growing Hebraic diaspora that would contribute heavily to a revival of Israeli life in Germany.

In light of the conference “50 Years German-Israeli Relations”, the Konrad-Adenauer-Foundation sought to address, foster, shape and provide a platform to Organizations that aided in the reconciliation process between the two nations, influencing civil society and governmental institutions alike.

All in all the Conference brought forth a multitude of topics: It assessed the German-Israeli relations past and present, it introduced a third actor, the U.S., into the political picture while analyzing future challenges of global interest and development. Most importantly, the conference encouraged the exchange of ideas between international actors from Israel, Germany and the United States, thus setting the stage for future generations.