US political, economic and financial developments call for closer scrutiny to better understand their implications at German national and sub-national levels. Finance Minister from Hessen, Dr. Thomas Schäfer, led a delegation of State of Hessen parliamentarians on a fact-finding mission to New York and Washington, DC, to explore how presidential campaign politics in America may influence global economic policy and trans-Atlantic relations.
May 20, 2016 Ordering Information

The delegation from the State of Hessen visited New York and Washington, DC during the week of April 24 through 30, 2016, just after the conclusion of the annual International Monetary Fund/World Bank Group spring meetings. The delegates met in New York with senior managers from the financial sector, including, for example, Helaba Bank, Deutsche Bundesbank, New York Stock Exchange, Goldman Sachs, and JP Morgan. They also met with senior managers from companies such as BASF and BMW. Discussants in New York and Washington frequently raised issues of slowing growth in the world economy and Germany’s singular position of economic and financial strength and leadership in Europe. Also of interest to the delegation were the unexpected dynamics of the present American presidential political campaigns and the possible implications for US trade and foreign economic policies as well as leadership in the world economy.

The delegates heard in during their meetings that American presidential campaign politics are dominating the economic and financial news nearly every day. At their meeting with the Northern Virginia Regional Commission, which is to the South of Washington DC, they had the opportunity to meet with local political leaders, in order to gain insights into presidential politics at the state level. Several East Coast presidential primaries took place during that week, so the delegates observed first-hand election outcomes. It demonstrated that Donald Trump is a real force in American presidential politics and to be reckoned with. The Hessen delegates learned from local observers that both parties were going in unexpected ways.

Many voters say that they are supporting Donald Trump for the Republican Party nomination and Bernie Sanders for the Democratic Party nomination because of their anger about the good jobs that have been lost due to unfair trade relationships with countries such as China and Mexico. The delegates discovered in the discussions that many American voters of both parties believe that free trade has been largely responsible for the growing personal income inequalities in the United States. Current American campaign rhetoric is turning politics sharply against trade agreements, with TPP being the most contentious.

The delegates from Hessen also came to understand that both Republican Party and Democratic Party leaders are especially motivated to win the presidency—or deny the presidency to the other party’s nominee—because of the unexpected death of the most conservative Supreme Court Justice Antonin Scalia. This has left the Highest Court with only eight justices, who often divide four-to-four. Any contentious issues cannot reach a majority and will not be resolved. So, for example, President Obama’s executive order regarding regulatory implementation of the Clean Coal Power Plan, a major tool to fulfill American’s commitment at the Paris Climate Summit, would face possible peril. Though President Obama has nominated a ninth justice, Republican leaders in US Congress have said they will not decide on the nomination before he leaves office. Thus, the next president may nominate the ninth justice and so tip the balance of the court one way or the other.

The discussions concerned more than the extraordinary politics of the US presidential campaigns. The delegates from Hessen also learned about the vigorous technology innovation and entrepreneurship system in the United States and how German start-up companies are participating in an “accelerator” in New York City. The German Accelerator helps German IT start-ups with mentoring, venture capital, and office space in Silicon Valley and San Francisco as well as in New York. The State of Hessen delegates were excited to see that the German Accelerator seeks to identify and assist German entrepreneurs who are leading projects that truly hold promise to succeed not just in the German market but to be innovators in the US market, too.

The importance of the German American relationship was pointed out at every part of the program. The transatlantic economy remains the largest and wealthiest of the global economy and is not always valued when other topics seem to define the transatlantic relationship. Europe and the US have surprisingly much in common and are not to be underestimated; our differences in policy approach seem less divisive when embedded in a broader global context. The Konrad-Adenauer-Stiftung, through its deep relations with US decision makers and its extensive networks is able to convey policy and politics that are of importance to the transatlantic relationship. This fact-finding trip by the Hessen delegation proved successful in that we achieved a better understanding of the many pressing economic, political and social matters with its implications on Germany’s national and regional levels. 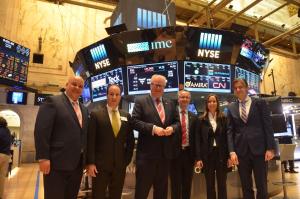