The United States under Trump: Internal Dynamics and Repercussions on the Middle East

On February 7 the Konrad-Adenauer-Foundation hosted a public round table in collaboration with Maison de Futur and the Middle East Institute for Research and Strategic Studies (MEIRSS) on the topic of “The United States under Trump: Internal Dynamics and Repercussions on the Middle East”.
7 février 2019 Informations de commande 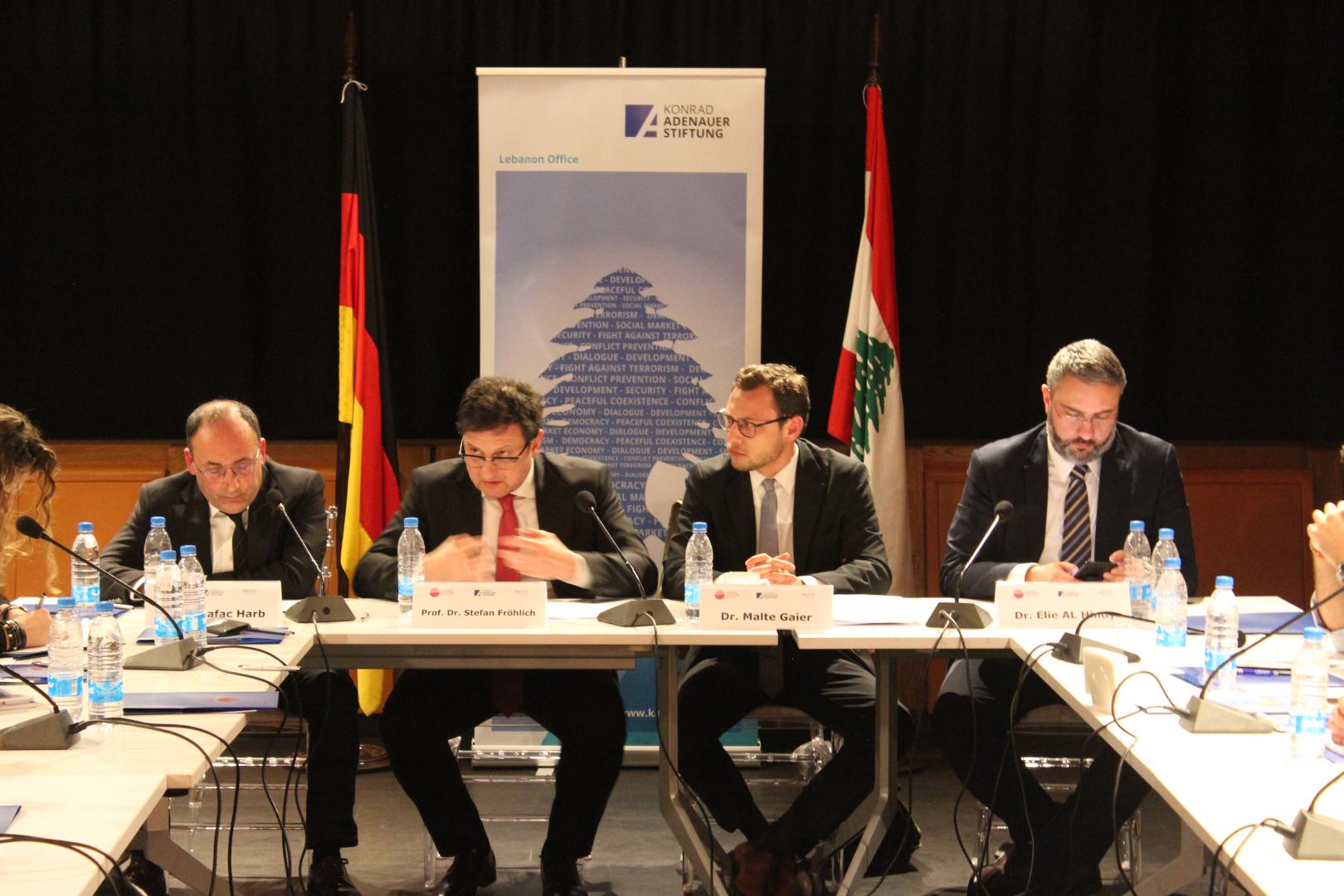 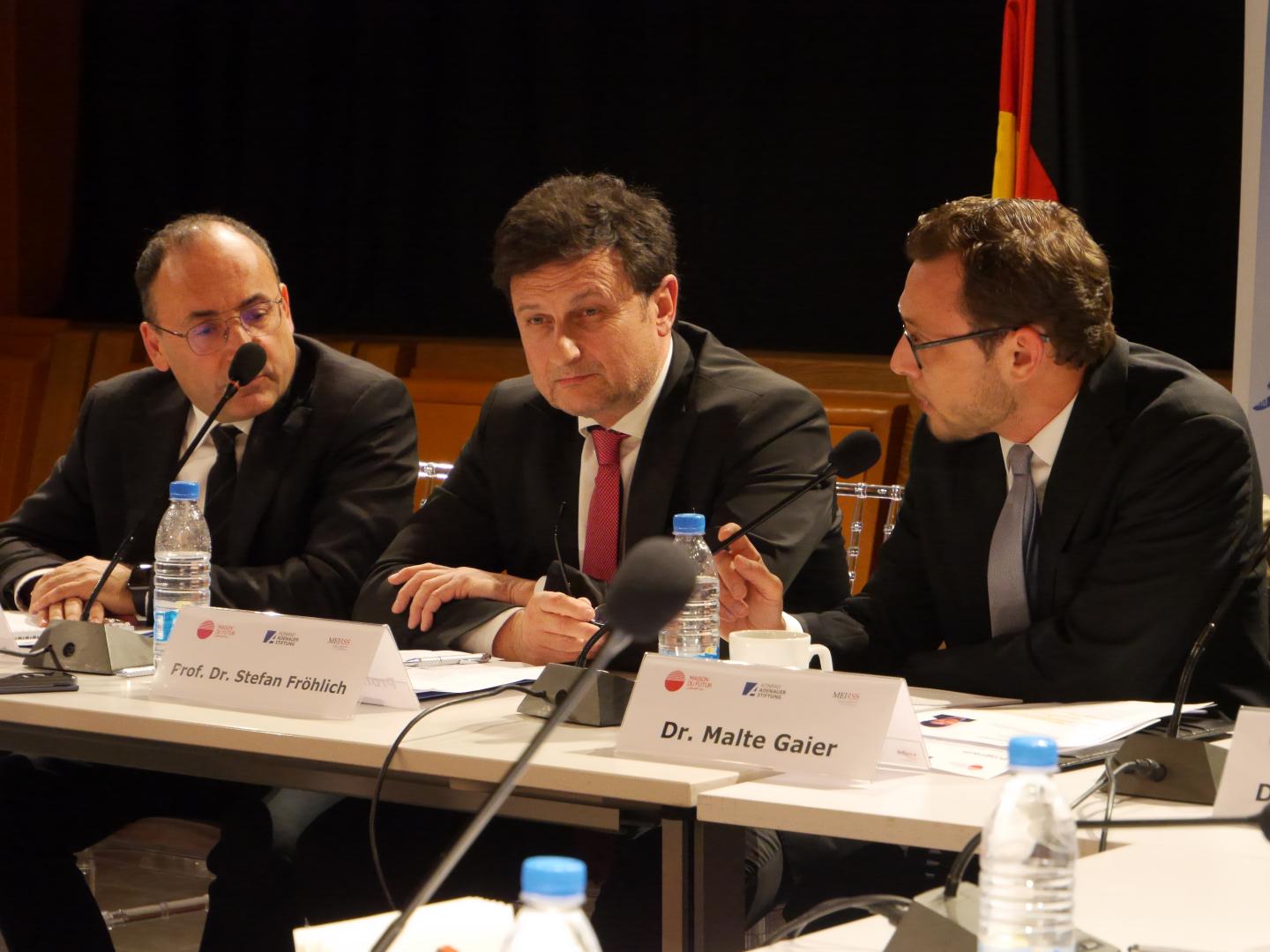 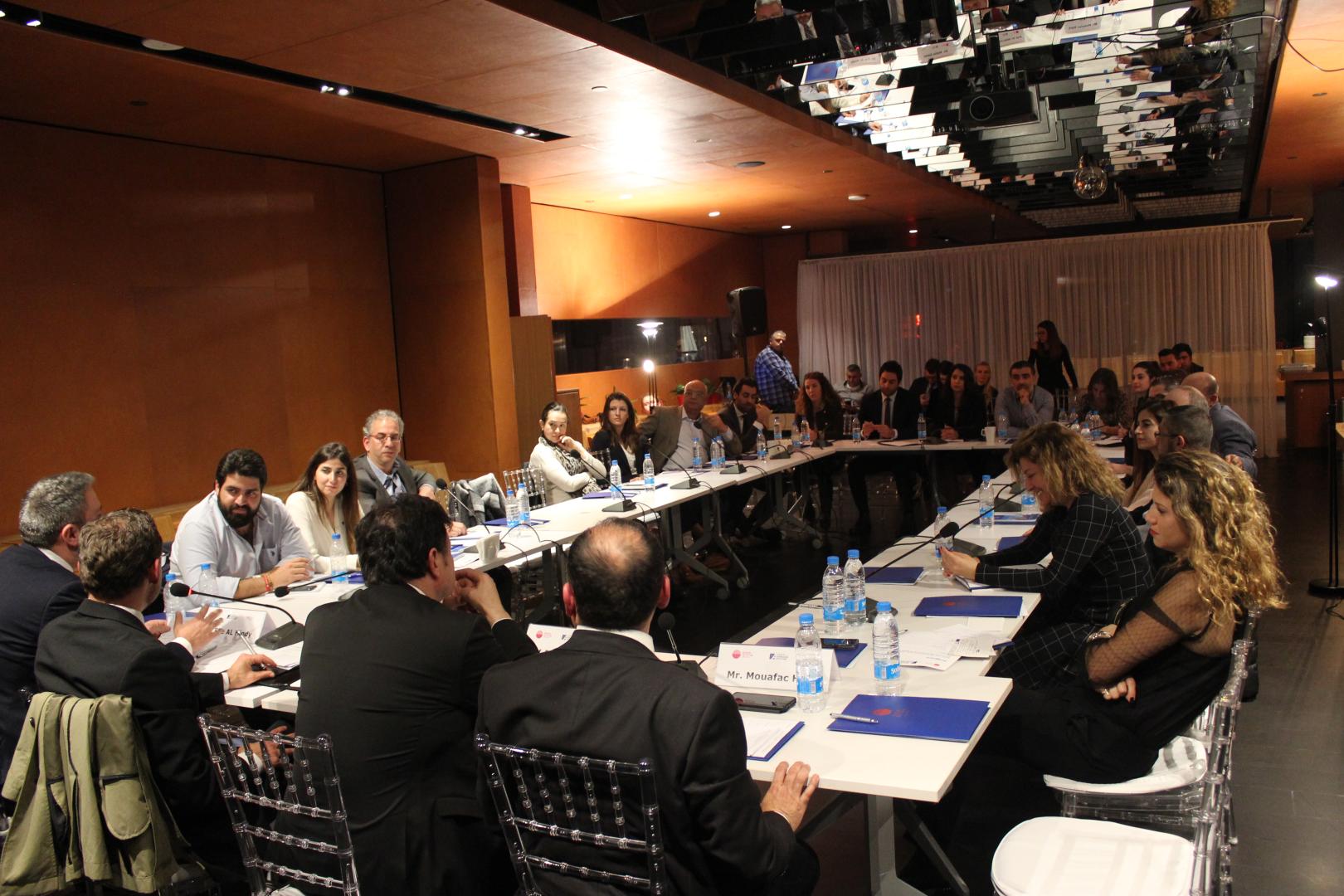 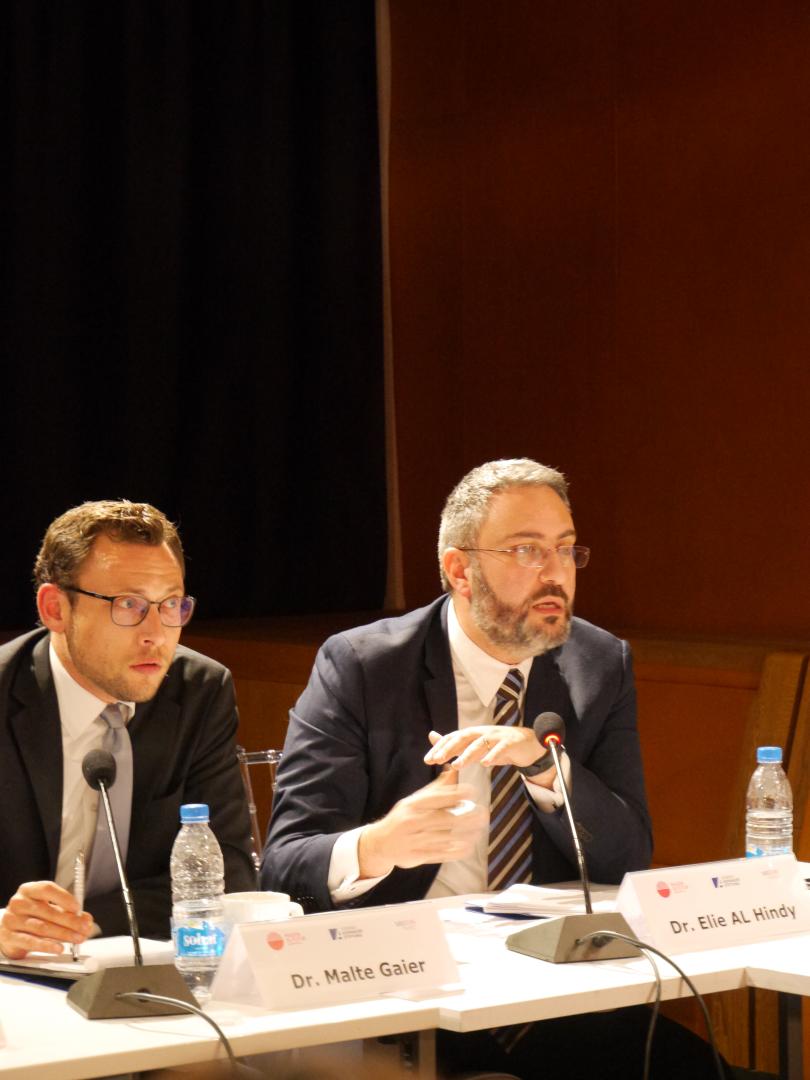 Moderator and head of KAS-Lebanon, Dr. Malte Gaier, welcomed German Professor and US-Policy expert Dr. Stefan Fröhlich from the University of Nuremberg-Erlangen, Moufac Harb, former director of the Arabic TV-channel Alhurra in the US, and Dr. Elie Al Hindy, director of the MEIRSS Center, as panelists to the round table. The speaker discussed the contemporary US-foreign policy strategy and its repercussion on the Middle East. The speakers referred in particular to the relocation of the US-embassy in Jerusalem, the one-sided termination of the nuclear agreement between the US and Iran and the withdrawal of American troops from Syria. After the three brief presentations of each panelist Dr. Gaier opened the floor for questions and comments from the participants. Among the guests were representatives of political parties, think tanks and journalists.

At the beginning of his presentation Dr. Fröhlich argued that the Trump-administration shows to some extent an indifference towards liberal values. Trump’s well-known position, according to which politics is a “zero-sum-game”, explains the US-withdrawal from crisis regions like the Middle East. With regard to the struggle of regional and global great powers like Russia, China and Iran to fill the power gap left behind by the Americans, Dr. Fröhlich stated: “We are back in great-power-competition!” As a result, Europe needs to adjust its Middle-East-strategy in order to protect its interests and promote western values. As Dr. Gaier emphasized subsequently, Europe has to accept its responsibility towards its close neighbours – especially in times of US-retreat.

Mr. Moufac Harb opened his presentation with the observation that the hopes of the international community, according to which Trump’s foreign policy would be kept in check by his advisors, have not materialised. According to Harb, only John Bolton, Trumps Security Advisor and vigorous supporter of the “America First”-mantra, has been able to influence the President’s security politics with his vision: “If you break it you own it. “– A lesson learned from the aftermath of the Iraq and Afghanistan war. The Trump administration’s decreasing interest towards the Middle East thus manifests itself by the declaration to withdraw from Syria. According to Mr. Harb the US has furthermore already achieved its two main goals: First, to permanently safeguard Israel and second, to isolate Iran economically and politically.

Dr. Elie Al Hindy disagreed with Mr. Harbs statement that the President of the United States could steer freely when it comes to foreign politics. Al Hindy underlined that one has to always keep in mind that the US is a country of checks and balances and that the Congress’ influence on foreign policy cannot be underestimated. According to Dr. Al Hindy, Washington is well aware of the bipartisan firewall holding against Trumps foreign policy agenda. Nevertheless, he agreed to his previous speaker’s statement according to which the US has accomplished its main goals in the Middle East – with devastating consequences for its allies in the region, like the Northern Iraq Kurds. With regard to Lebanon he emphasized that the US’ relation with Hezbollah and their tightening sanctions on the organization have serious implications for Lebanon’s political stability.


After the presentations, Dr. Gaier opened the floor for questions and comments. The contributions referred in particular to the future of the role of the US in the Middle East. During the discussion, the panelists clarified that at the moment no great power is in the position to fully replace the US in Middle East. Russia, for instance, would follow specific military interests such as in Syria, but does not present a credible umbrella power to the Arabic states.

The KAS thanks the participants of the round table for their valuable contributions to the discussion. Special acknowledgements go out to the panelists, Dr. Stefan Froehlich, Mr. Moufac Harb and Dr. Elie Al Hindy, for their detailed and informative presentations.