It is a great pleasure and honour to address you tonight at this roundtable dinner organised by the Konrad Adenauer Foundation. My sincerest thanks to the Director of the Foundation's European Office, Mr Franz-Josef Reuter, and to his colleagues, for organising this event.

Thank you also to Mr Jörg-Dietrich Nackmayr for helping to make my visit to Brussels so successful.

This is my first speech outside of Estonia since my appointment as Prime Minister of Estonia a little over a month ago. And I believe that it is more than appropriate that I deliver it in Brussels - a city that is closely associated with two of Estonia's most important foreign policy priorities - the EU and NATO.

Today, I would like to focus on the first priority - the European Union - and outline the main tasks and challenges that my government faces in the coming twelve months before EU accession. I would also like to share with you Estonia's views on the Future of Europe. Finally, I will outline some of Estonia's future priorities within the EU.

Estonia's new government assumed office on the 10th of April. From the start we expressed our clear will to continue the work done by previous governments in the EU field. Indeed, our first decision was to approve Estonia's Accession Treaty to the European Union. We are fully aware of the significance of the challenges that faces us in the years ahead. And we do not take this responsibility lightly.

At present, the most immediate task on my government's list of priorities is preparing for Estonia's referendum on EU accession. On September 14, Estonian citizens will go to the polls to decide on EU accession. The government's aim is not to tell people how they should vote, but to provide them with information so that they can make as informed a decision as possible, based above all on facts, not emotions. The results of referendums so far held in other candidate countries are encouraging. And, of course, my government hopes that the outcome of our referendum will also be positive.

Since signing the Accession Treaty last month in Athens, we have been an 'active EU observer.' Our new status gives us the chance to take part in council meetings and debates on various policy issues. It also gives us the opportunity to experience EU decision-making up close through access to hundreds of meetings and thousands of internal documents. But integrating into the EU is more than just attending meetings. During our accession negotiations we sat on the opposite side of the table from the EU. Now we must get used to sitting on the same side. We must learn the ways of the Union - how to bargain, how to compromise and how to focus on identifying a common European interest. We must also fulfil the promises that we made during the course of our accession negotiations and bring our legislation fully in line with the European Union's. The bulk of the work in this area has been completed, but minor adjustments still need to be made.

But adjustment is not just a one-way process. We, the future members, are not the only ones who must adapt to new conditions. As we get used to the EU's way of doing business, the current members must also get used to us. They must not only become acquainted with our positions, but must also start taking them into account. If you read between the lines of what some European politicians say, then I cannot help but feel that there is still some way to go before all current member states start treating us as true equals. The misguided views that the new members are not European enough or simply want to join the EU for economic reasons are unfortunately still quite prevalent. Digestion of new members will take some time. I am confident, however, that with sufficient political goodwill, these mental barriers can, and will, eventually be overcome.

Allow me to now say a few words on the Convention on the Future of Europe.

On the whole, participating in the Convention has been a positive experience for Estonia. Indeed, it is our first European experience as a "nearly equal partner." The Convention has taught us many good lessons about what Europe is really about and how to act in it.

One of Estonia's main underlying principles in the debates has been the position that the EU is a Union of member states. We have also stressed the importance of maintaining equality between the member states. We support institutional reforms that are aimed at making the EU more efficient, transparent and democratic. But we do not share the pessimistic view that an EU of 25 will simply not work and that extensive reforms are inevitable. Some aspects of the EU's decision-making structure will certainly need to be reformed. But not necessarily all of them. Instead of automatically insisting that a complete overhaul of the existing decision- making system is needed, we should first test the Nice agreements in practice.

One of the most hotly debated issues at the Convention is what to do about the Presidency. Some argue that creating the post of a full-time chairman or 'President' for the Council would increase the efficiency of Europe. I must admit that I am not convinced. As a future member, it is important for Estonian citizens to know that their country is an equal player in Europe. The existing six-month rotating presidency system provides every member with the opportunity to steer the Europe Union on the highest level and influence the European agenda.

I am also sceptical about changing the size of the Commission. I believe that the next college of Commissioners should be given a fair chance to prove itself. We support one Commissioner per Member State - anything less than that is not acceptable - for me, for my Government, for Estonia.

I hope that the Convention will finish its work on time. I know that some member states would like to start the Intergovernmental conference as soon as possible. We believe, however, that there should be a break between the end of the Convention and the beginning of the IGC. We need enough time to discuss the results of the Convention at home.

Let me finally turn to Estonia's priorities within the European Union. More and more, we are being asked by member states what will be Estonia's interests in the Union. Indeed, we are asking ourselves the very same question. For a small country, it makes sense to focus on a limited number of priority areas. The population of Estonia is only 1.3 million. Clearly we cannot do as much, for example, as France or Germany. We need a strategy that will help us win in Europe, a strategy that will help us defend our national interests. We also need to decide how to spend EU funds wisely. Though it may be easier to build roads (and, of course, we need new roads), we should not limit ourselves to infrastructure projects. We must figure out how to spend money not only on asphalt but also on human capital - above all, on our people's health and education. One of the priority areas that we have already identified is the Lisbon process.

Over the last decade, Estonia has developed into one of the most open economies in the world. One of the main reasons behind our economic success has been our competitive approach - our market has been completely open for a long time. This means that we will probably not encounter any shocks when we join the EU's single market. We welcome the Lisbon process as a logical continuation of this policy and share its aims of turning Europe into the most competitive, dynamic, innovation driven, knowledge-based economy in the world by 2010.

Recent years have shown that real progress in these areas is hard to come. The gap between the EU and the United States regarding research and development and innovation is widening instead of decreasing. Estonia faces similar concerns. A significant increase of enterprise R&D expenditure cannot happen overnight. Increasing innovation depends on an entrepreneur's willingness to change, to learn and create something completely new. This is why we are asking our people about their visions and aspirations for the future. Our aim is to liberate creative minds, provide them with an environment conducive to learning and experimentation.

Though we are not yet EU members, we have already made progress in implementing certain aspects of the Lisbon agenda. Both in liberalisation and implementing a market driven economic policy. Also in the development of IT in the public services. Indeed, the Lisbon goals, especially innovation and development of information society are already at the centre of my government's economic policy. Another key area that I would like to mention is tax policy. In some circles, it has become tradition to accuse those who pursue a liberal agenda and resist the widening of EU competences of not being 'European.' Yet I believe that in order for Europe to work - economically as well as democratically - we have to draw a line somewhere. The areas belonging to the competence of member states should be clearly defined. To my mind, tax policy is one of these areas. The right to decide on tax issues allows each member state to take into account its own particular position in the economic and business cycle and to manage economic conditions accordingly. Removing unanimity in this area would either remove or significantly reduce the power of each member state to take into account the preferences of their citizens, to determine the structure of the tax system and the level of Government spending that this supports. In general, I believe that tax competition is healthy. Some have argued that a closely integrated economy will not work with different tax rates, but the existence of the United States proves that it can.

In conclusion, I would like to stress that we are not joining the EU with the aim of joining a separate block of either new or small member states. There is a strong tendency to group countries according to either size or geographic location. Yet we aim to be flexible. We want to adopt an 'issue-based' approach and co-operate with all of those who share our views.

During the past decade, we have taken decisions that have sometimes been very unconventional, but at the end of the day they have brought us success. Once we join the Union, we are eager to bring with us fresh, bold ideas that will hopefully promote innovation and growth and help strengthen the EU as a whole. 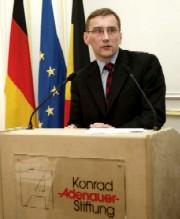