The European Office of the Konrad-Adenauer-Stiftung is pleased to invite you to the next session of our event series "KAS Europe Talks". In this format, the European Office regularly organises a discussion with the director of another KAS office, in which both the latest developments in the respective country or region and the status quo of relations with the European Union are discussed. This event takes a look at Australia and a partnership that has gained strate-gic importance in recent times and ought to be further deepened in the coming years.
27. April 2021 10:00 - 11:00 Uhr 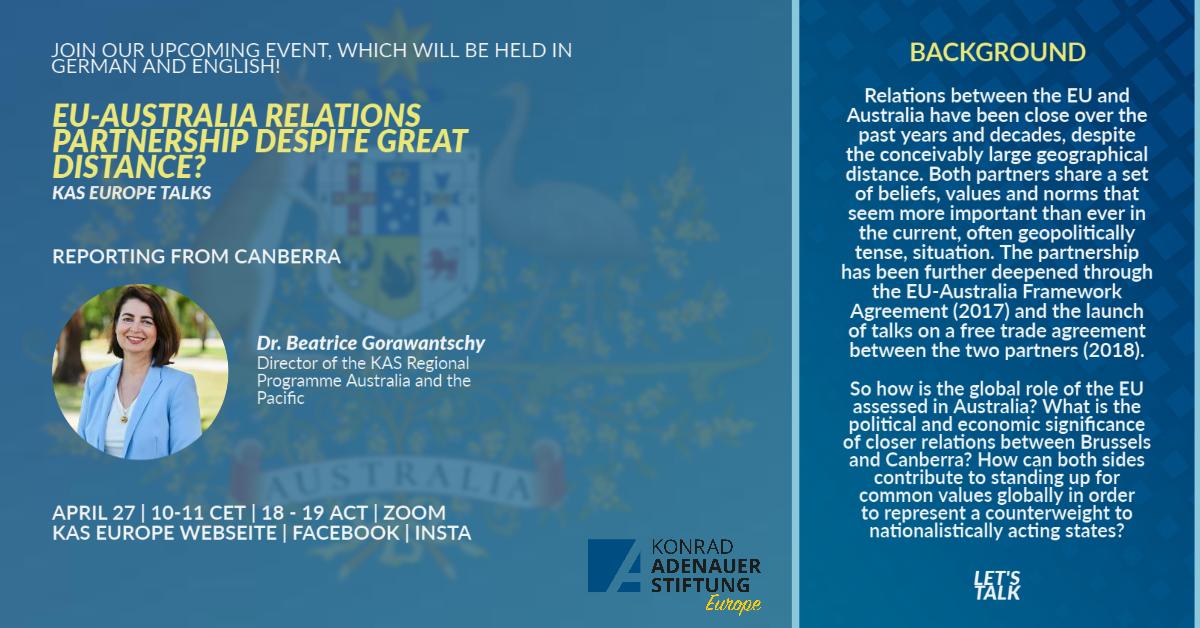 Relations between the European Union (EU) and Australia have been close and amicable over the past years and decades, despite the conceivably large geographical distance. Both partners share a set of beliefs, values and norms that seem more important than ever in the current, often geopolitically tense, situation: An unconditional commitment to liberal democracy and multilateralism, global advocacy for freedom and human rights, and support for a rules-based international order. In recent years, the partnership has been further deepened through the EU-Australia Framework Agreement (2017) and the launch of talks on a free trade agreement between the two partners (2018), integrating it into a series of initiatives aimed at strengthening relations between European and Indo-Pacific states at all levels. In the wake of the Corona pandemic, which Australia - like neighbouring New Zealand - has managed to control through the consistent implementation of a zero-Covid strategy, criticism on the EU was voiced, after the initial joint demand for a complete clarification of the pandemic's origin, as Australia is affected by the export restrictions on vaccines from the European Union.

How is the global role of the European Union assessed in Australia? What is the political and economic significance of closer relations between Brussels and Canberra? How can both sides contribute to standing up for common values globally in order to represent - together with other democracies - a counterweight to nationalistically acting and often autocratically led states such as the People's Republic of China?

The event "KAS Europe Talks: EU-Australia Relations – Partnership despite great distance?" will take place on Tuesday, 27 April 2021 from 10:00-11:00 CET (18:00-19:00 ACT) via Zoom. We look forward to discussing the above-mentioned topics with our colleague Dr. Beatrice Gorawantschy, Director of the KAS Regional Programme Australia and the Pacific. After the discussion between Dr. Gorawantschy and Dr. Hardy Ostry, Director of the European Office of the Konrad-Adenauer-Stiftung, the audience will have the opportunity to contribute their questions to the discussion. The event will be held in German and will also be simultaneously translated into English.