Insights from the Netherlands and Germany

The Embassy of the Federal Republic of Germany in The Hague in cooperation with the European Office of the Konrad-Adenauer-Stiftung in Brussels cordially invites you to the online discussion “Populism and Political Fragmentation – Insights from the Netherlands and Germany”, to be held on Tuesday, 20 October 2020 (10:00-11:30) via Zoom. After sending your registration, you will receive a confirmation e-mail which will include the link to join our virtual discussion.
20. Oktober 2020 10:00 - 11:30 Uhr 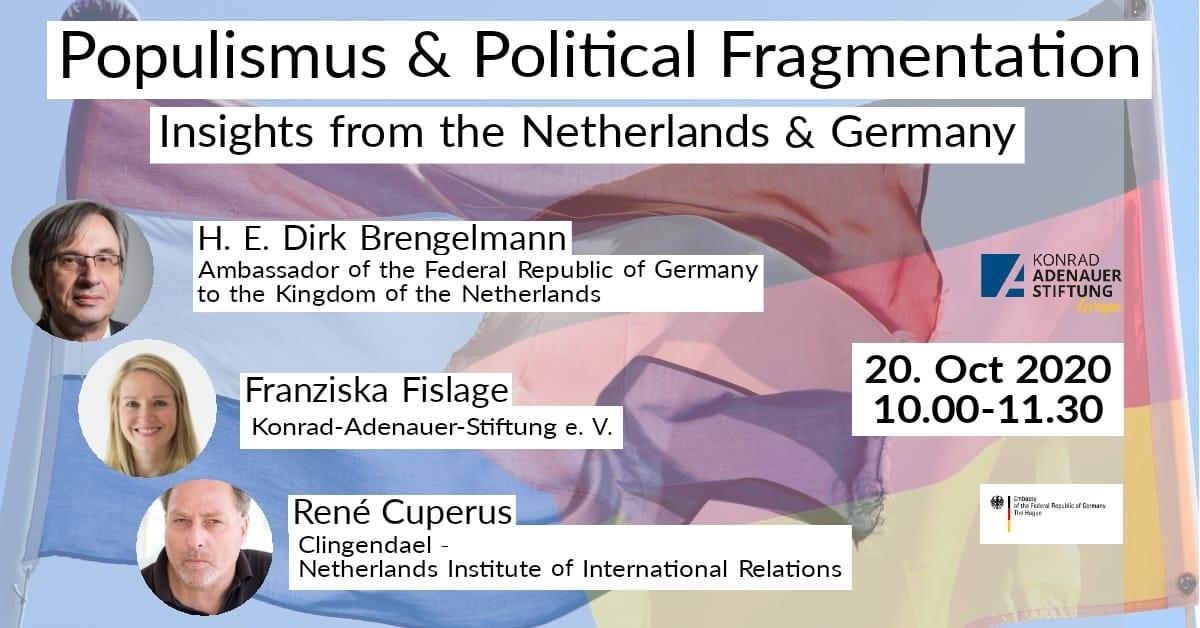 Populism and Political Fragmentation – Insights from the Netherlands and Germany

In most European countries, the political landscape has shifted within the last couple of years. Traditional parties tend to lose influence, while new actors appeared and were able to put pressure on existing structures and long standing party systems. Some countries that have for decades been categorized as “two-party-systems” – like the United Kingdom or Spain – experienced adjustments or even the collapse of their traditional system and changed into a more diverse, yet also more fragmented party landscape with a higher number of political parties represented in parliament and the need to form coalition governments for a majority.

In addition to the ongoing process of political fragmentation, the phenomenon of populism gained ground in most European states but also on a global scale. The Netherlands and Germany are no exception: Partij voor de Vrijheid (PVV), Forum voor Democratie (FvD) and Alternative für Deutschland (AfD) became an integral part of the Dutch and German party system and continue to push their agendas. Traditional parties feel compelled to find a modus operandi regarding the newcomers and have to make decisions about whether or not to work with them, whether or not to vote with them and whether or not to accept them as the democratically elected colleagues they are.

What are the main implications of the recent election results for populist parties in Germany and the Netherlands and to what extent did traditional parties adjust their views and policies because of the new competitors? Did the political discourse change and if so, how can traditional political parties make sure that democratic principles and rules are maintained in a more fragmented and/or more populist political environment? Which general conclusions can be drawn from the developments in Germany and the Netherlands with regard to populism and political fragmentation?

Ambassador of Germany to the Netherlands

Ambassador of Germany to the Netherlands