The European Office of the Konrad-Adenauer-Stiftung is delighted to invite you to the next session of our event format "The Morning After". In this online format, we are monitoring the Parliamentary and/or Presidential Elections in Euro-pean states and discuss the results with our KAS colleagues in the respective country. Furthermore, we try to assess the implications the results could have for the country’s relationship with the European Union. This session will focus on Bulgaria, where the Parliamentary Elections 2021 will take place on 4 April.
6. April 2021 10:30 - 11:15 Uhr 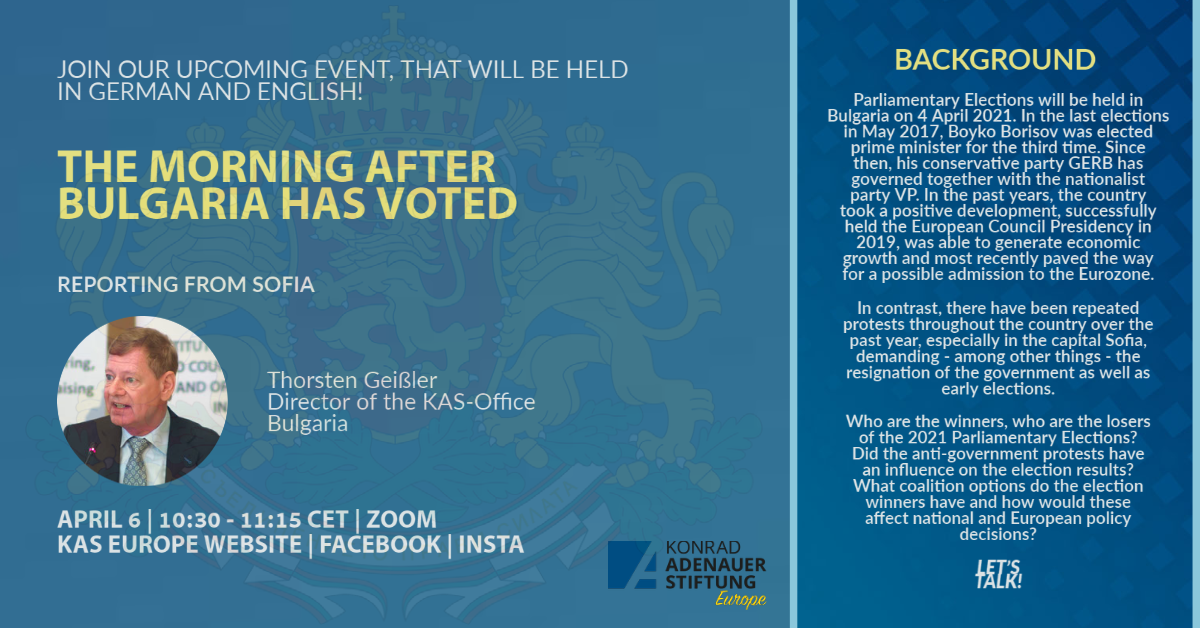 Parliamentary Elections will be held in Bulgaria on 4 April 2021. In the last elections in May 2017, Boyko Borisov was elected prime minister for the third time. Since then, his conservative party GERB (member of the EPP at European level) has governed together with the nationalist party VP ("United Patriots") and is occasionally supported by different parties. In the past years, the country took a positive development, successfully held the European Council Presidency in 2019, was able to generate economic growth and most recently paved the way for a possible admission to the Eurozone. In the beginning, it was also assumed that Bulgaria would come through the Corona pandemic better than other EU member states due to effective measures taken by the incumbent government.

However, this hope might decrease with the arrival of the third wave of infections. In contrast, there have been repeated protests throughout the country over the past year, especially in the capital Sofia, demanding - among other things - the resignation of the government and the general prosecutor as well as early elections. President Rumen Radev, who is supported by the Socialists, has been particularly critical of the government and accused them of corruption and nepotism. Since Bulgaria's admission to the European Union (2007), various governments have faced such accusations several times.

Who are the winners, who are the losers of the 2021 Parliamentary Elections? Did the anti-government protests of the past months have an influence on the election results? What coalition options do the election winners have and how would these affect national and European policy decisions?

The event "The Morning After – Bulgaria has voted" will take place on Tuesday, 6 April 2021 from 10:30-11:15 h CET via Zoom. We are looking forward to discuss the above-mentioned topics with our colleague Thorsten Geißler, Director of the KAS Office in Bulgaria. After the discussion between Mr. Geißler and Dr. Hardy Ostry, Director of the European Office of the Konrad-Adenauer-Stiftung, the audience will have the opportunity to bring their questions into the discussion. The event will be held in German with simultaneous interpretation into English.