In early December, trade experts met at the European Office of the Konrad-Adenauer-Foundation in Brussels in order to discuss the most relevant developments in transatlantic data exchange and recent developments in the new digital economy.
7. Januar 2016 Bestellinformationen

In early December, trade experts met at the European Office of the Konrad-Adenauer-Foundation in Brussels in order to discuss the most relevant developments in transatlantic data exchange and recent developments in the new digital economy. Recent studies reveal that the data volume crossing transatlantic submarine cables has risen by 19% whereas international demand for broadband has even risen by a mindboggling 45% rate between 2012 and 2014. These numbers underline that data nowadays plays a significant role in transatlantic trade. It shows further-more how our ever more interconnecting and globalizing world economy is fundamentally changing in its nature. The trend in many developed nations is that of a transition towards an increasingly data-driven economy, where some experts even see data as the ’’new currency’’ or ’’oil of the modern economy’’.

The global economy is changing

As pinpointed already, the global economy is changing in nature and evolves into a digital economy. Studies outlined several distinct developments that have triggered this transformation: (1) first of all, the ‘old economy’ was based on the production and trade of goods and services. This has shifted; groundbreaking technological advancements have led to a more digitalized economy in which data plays the new chief part on the world stage. (2) Secondly, more and more business transactions are managed online, where data is required for a well-functioning global value chain of internationally operating enterprises. The statement ‘no data, no trade’ seems to be appropriate in this context. (3) Finally, investment patterns have changed as well. There has been a colossal rise in investments into intangible assets such as intellectual property, research, brands, knowledge, data and information. All in all, it seems that the digital economy is becoming a fundamental part of our common idea of the world economy.

How can we measure these changes?

However, in spite of the growing importance of digital trade there are still no appropriate measurement tools that are capable of fully capturing the extent to which these changes are taking place and/or have already taken place. Even though the economist Simon Kuznets was able to come up with the modern concept of GDP measurement in 1934 – a measurement which we are very much used to by today – no such concept has been developed for measuring digital trade. What we so far know through our current measurement tools about the digital economy only forms the top of the iceberg.

In their new paper "Uncovering the Hidden Value of Digital Trade" Paul Hofheinz and Michael Mandel present one measurement tool which seems to be able to deliver a more appropriate assessment by focusing on the 'digital density and investment in intangible assets'. This measurement tool looks at how large the investment into intangible assets as a share of GDP is, and plots the data with the amount of gigabytes of data used per capita per month on a per country basis.

The results for 2014 reveal that the United States is clearly in the lead, followed by countries such as Sweden and the United Kingdom. These countries heavily invest into intangible assets and individuals living there are heavy consumers of digital data. However, things look less rosy for countries such as Spain, Italy, France and Germany which are lagging behind. It is estimated that a total of €209 billion worth of investments into intangible assets would be required for these four countries in order to raise their individual digital density level to that of the UK. The results are similar if one concentrates on the estimated usage of data per capita in 2014. Again, countries like South Korea, the United States and Canada make up the first three places respectively, while countries such as Italy, Spain and Germany have fallen behind and find themselves below the Western European average for per capita usage of data.

Even though many Europeans work in the digital industries, the largest tech companies still have their headquarters in the United States of America. And even though Germany has announced an ambitious 'Industry 4.0'-project and despite of the digital single market strategy of the European Commission, it still seems that Europe as a whole is falling behind in the digital race. The urgent question hereby is: what can Europe do in order to make up for lost ground?

What can Europe do to not fall behind?

One important first step which was emphasized during the discussion at the European Office of the Konrad Adenauer Foundation was the need to come to a conclusion after the Safe Harbor ruling by the European Court of Justice. The participants pointed out that global companies require clarity regarding what data they are allowed to transfer. The status quo is that the previously existing legal framework has been removed, hence, there is a pressing need for constructing a new juridical basis which removes the current legal uncertainty for companies which are operating both in the US and Europe. Furthermore, it was mentioned that the creation of laws and regulations is constantly outdated by technological developments. It is thereby required that Europe and the US formulate legal guidelines on which both continents can orient themselves in the future. Particularly important in this matter is the formulation of the definition of what can be seen as personal and non-personal data.

The second step that was pointed out by the participants was the need to address the cross-Atlantic data exchange in the TTIP negotiations. This proposal could be problematic as the views on data safety seem to differ strongly between Europe and the USA. It was hereby brought to attention in the debate that there is a certain risk for the global value chain when seeking to find the right mix of regulations and policies to address some of the concerns in the negotiations. Nonetheless, TTIP could be a model for showing the way how Europe and the United States like to see digital trade being addressed in today’s global economy. Reaching an ambitious agreement that lays down very clear guidelines of what is acceptable and what is not in digital trade would set important global norms and standards of which other countries will have to take notice of.

What would be the consequences and benefits of taking these two steps?

There are very distinct differences between the various countries on the globe (e.g. China, Iran, Saudi-Arabia and Russia) when it comes to the question of how the internet should be governed. There are very different ideas on what is permissible, what is not permissible and how privacy is actually defined. The sooner the United States and Europe come together and form an agreement, the higher the chances are to preserve an open, free, effective and powerful internet. The current differences between both parties concerning this topic are comparatively small when one compares them to the ideas which certain dictatorships have in this context about internet governance.

Additionally, 60% of the global population still needs to get access to the internet. When these citizens will finally come online, they will have the same opportunities that we in our western society have had; be it for expressing themselves, organizing themselves or creating new business forms online. By forming a transatlantic agreement, the US and Europe can represent a model that other countries could use as orientation, thereby promoting the idea of a free and transparent internet.

The shift towards a global digital economy brings a lot of challenges with it. Nonethe-less, the opportunities which come along with this shift are far greater. The first step towards facing these challenges is to clearly define for both parties what digital trade is and agree on how one must measure it. This would be the first step for finding common ground and lay the basis for cooperation. The second step would be to put more effort into negotiating what the terms and rules are in transatlantic digital trade. The GATTS agreements, where under certain conditions countries are allowed to make an exception and not apply the set standards as outlined by the legal framework, could be an example of which both sides might make use of. The faster an agreement is reached, the more likely it is that its framework will be adopted by other countries und thereby promote the ideas of Europe and the US of how digital trade should look like. As one participant concluded: "These negotiations are not a race to the bottom. In contrary, they should be seen as a race to the top." 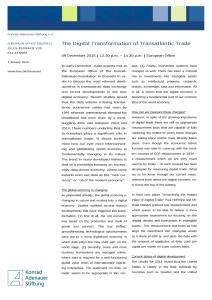