Joint event with the Cologne Institute for Economic Research

After the important deal on the future of ETS, experts met in the European Office of the Konrad-Adenauer-Foundation for a panel discussion on ETS reforms organized in cooperation with the Cologne Institute for Economic Research.
15. Mai 2015 Bestellinformationen 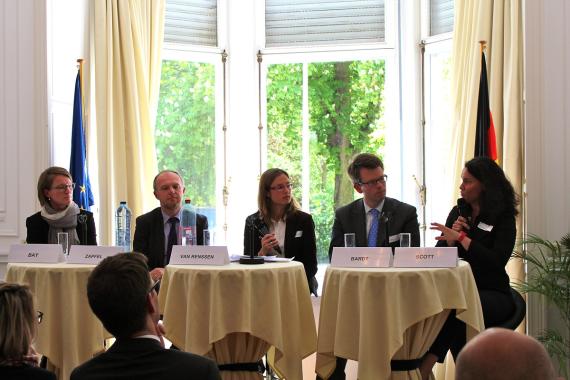 On 5 May 2015, the European Parliament and the Latvian Presidency of the EU Council of ministers informally agreed upon a draft to reform the EU Emission Trading Scheme (ETS). This draft includes, first of all, a market stability reserve (MSR) mechanism, which will start operating on 1 January 2019. The mechanism allows EU officials to correct market imbalances by adding or removing ETS allowances from the market. To reduce the huge surplus of carbon allowances, 900 million “backloaded” allowances and a high amount of unallocated allowances will be placed in the MSR. Secondly, the Parliament and the Council decided that the revised Emission Trading Scheme will focus more on the threat of carbon leakage, competitiveness aspects as well as employment and GDP related issues. One day after Parliament and Council agreed on the draft, representatives from EU institutions as well as from industry and academia met in the European Office of the Konrad-Adenauer-Foundation to debate the envisaged reforms.

Although the speakers shared controversial opinions on whether the ongoing ETS is working or not, they all agreed on the importance of COP21 and of the willingness of certain key actors (e.g. China and the USA) to cooperate in climate issues. The roundtable discussion was introduced by Dr. Michael Hüther, Director of the Cologne Institute for Economic Research and moderated by Sonja van Renssen, co-founder and Brussels correspondent of Energy Post.

Starting the discussion, Dr. Hubertus Bardt, Head of the Scientific Department of the Cologne Institute for Economic Re-search, described the ETS as a “teenager” still on his way to become an adult. According to him, the strong reduction of greenhouse gas emissions over the last years has shown that the current system is working properly. Nevertheless, certain issues needed to be questioned: Is the use of international carbon credits in the Emission Trading System a proper measure to reduce emissions? Could the EU be even more demanding in reducing the total amount of greenhouse gases? Is there any predictability after 2020? Dr. Bardt labeled the unclear situation with respects to emission targets as a major concern. Due to the open future of ETS, companies do not have enough predictability for their long-term goals and investments. Consequently, he opposed the ETS reforms and proposed instead to link the current system with other countries as well as to integrate new sectors.

Birgitte Bay, Head of European Affairs, DONG Energy, agreed on the importance of predictability, pointing out the continuing uncertainty for the industrial sector. She, however, disagreed with Dr. Bardt on the functioning of the ongoing system. For her, ETS is not dynamic enough to foster changes in demand and supply and Mrs. Bay therefore welcomed the planned reforms of the EU ETS. Speaking on behalf of companies, she underlined the importance of COP21 in Paris but also stated that the industry cannot wait if the negotiations about a new climate agreement are dragging on for years. A clear mechanism and definite targets are needed now.

Peter Zapfel, Head of Unit “Implementation of ETS”, DG CLIMA ACTION, presented the deal as key for the future of ETS. After explaining the decisions made on the MSR, he underlined two important pillars of the reforms – carbon leakage and funding. The first pillar describes the risk of companies transferring productions to other countries with weaker carbon constraints. Acknowledging that this threat is significant, the draft proposes updating benchmarks, aligning price allocation to production levels and addressing indirect emissions and indirect costs. The second pillar includes an innovation as well as a modernization fund. The former promotes low carbon innovations by 400 million ETS allowances, the latter supports low income member states with a certain production potential. Mr. Zapfel also stated that a stronger carbon market is needed, although one has to consider the global economic development (especially China).

Jesse Scott, International Energy Agency (IEA), was very optimistic about the global efforts to reduce greenhouse gases. She thereby referred to similar systems as ETS which can be found in many non-European countries. Today, nearly one quarter of the worldwide emissions are covered by emission systems. The carbon markets of all these countries may differ in their emphasis and methods (China, for instance, focuses on the industrial sector, while California concentrates on the transport sector) but one can clearly detect a global effort. Likewise, Scott was optimistic about an agreement at COP21 as one can observe serious actions by all 3 most important global players – the EU, the USA and China. Scott referred, for example, to the joint agreement between Obama and Xi Jinping or the an-nouncement of the energy revolution in China. 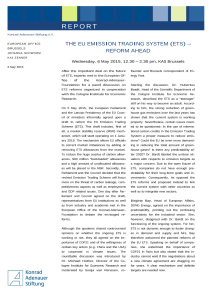