Regional policy and cross-border regional cooperation – a success factor for the European Union?

Jan Metzler MP (CDU), Member of the Committee on Economic Affairs and Energy and Deputy Member of the Committee on Foreign Affairs in the German Bundestag shared his point of view on regional policy and cross-border regional cooperation in Germany on April 3rd 2017 in the Konrad-Adenauer-Stiftung in Rome. The short presentation was followed by a discussion with the public.
10. April 2017 Bestellinformationen

The structural and cohesion policy is one of the central policy areas of the European Union. Around a third of the EU's public funds are being used for it. The aim of it is to reinforce economic, social, and territorial solidarity (or "cohesion") in the EU, mainly by fostering growth and employment in those regions whose development is lagging behind (so-called "structurally weak regions").

But not only between EU member states but also within the member states structural challenges force governments not to leave weaker regions behind. In Germany it is even constitutionally fixed in the Basic Law. Therefore structural policy is part of the general area of German economic policy. Its main task is to enable structurally weak regions to minimize their region-related disadvantages and to provide them with access to general economic developments by mainly creating an attractive economic location attractiveness in order to preserve or create jobs.

The initiative A GERMAN PERSPECTIVE is a new series of the Konrad-Adenauer-Stiftung in Italy. Current topical issues are discussed with experts from Germany. 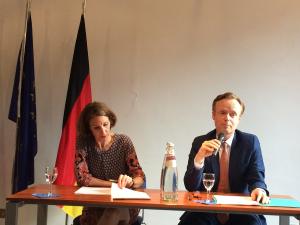