The Terrorist Threat in Germany - perception and reaction

Dr. Kristina Eichhorst, Coordinator for counter terrorism and conflict management of the Konrad-Adenauer-Stiftung Berlin shared her point of view on the perception and the reaction of the threat of terrorism in Germany on March 31st 2017 in the office of KAS in Rome. The short presentation was followed by a discussion with the public.
2. April 2017 Bestellinformationen

Estimated about 5.000 Foreign Fighters have left Europe to join ISIS – but the dark number is certainly much higher, states Dr. Kristina Eichhorst, Coordinator for

Counter terrorism and conflict Management of the Konrad-Adenauer-Stiftung (Foundation)

in Berlin in the context of the event “A German perspective. The Terrorist

Threat in Germany - perception and reaction”. Radicalization is a process

that starts in the family, so Eichhorst, and it starts on an individual level.

Since 2001, Germany has launched amongst others initiatives, more than 40 legislative

initiatives, has risen up a joint counter-terrorism center and has set up a hotline

for family with radicalized members.

The initiative A GERMAN PERSPECTIVE is a new series of the Konrad-Adenauer-Stiftung in Italy. Current topical issues are discussed with experts from Germany. 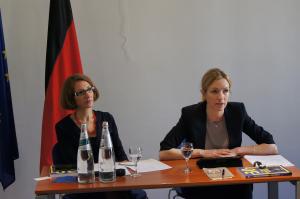