This international conference organised by the Regional Program Near East/ Mediterranean of the Konrad-Adenauer-Stiftung (KAS) in cooperation with the Group of the European People’s Party (Christian Democrats) and European Democrats in the European Parliament, took place on 3rd to 4th December 2006, at the Dead Sea-Jordan. It was attended by members of the European Parliament as well as deputies from Jordan, Algeria, Tunisia, Turkey, Egypt, Israel, Morocco, and the Palestinian territories. The purpose of the conference entitled “From Barcelona to the Neighbourhood Policy – Parliamentary Dimension of the Mediterranean Dialogue” was to establish informal direct contacts between parliamentarians from both shores of the Mediterranean.
9. Januar 2007 Bestellinformationen 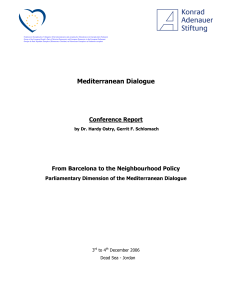