Women’s organizations in Jordan are highly committed to serve the cause of equality and justice for society. Yet, their work is not known by a large part of the community. One reason is that many of their members lack the skills needed to approach and to professionally deal with media companies. Therefore, KAS Amman and Imdad Media Center organized a five days Trainingworkshop for Jordanian women’s organizations to gain better media skills.
18. September 2013 Bestellinformationen

Women’s organizations in Jordan are highly committed to serve the cause of equality and justice for society. Yet, their work is not known by a large part of the community. One reason is that many of their members lack the skills needed to approach and to professionally deal with media companies. As a result, women’s organizations are limited in spreading their work and, thus, are unable in gaining more understanding and support for their work.

In this context, Konrad Adenauer Stiftung Amman/KAS Amman and Imdad Media Center organized a training workshop from the 30th of June until the 4th of July 2013 for Jordanian women’s organizations to gain better media skills.

Dr. Nabil AlSharif, Director of Imdad Media Center, and Dr Otmar Oehring, Resident Representative of KAS Amman, welcomed all participants and thanked them for their great commitment and work. They emphasized the vital role media plays nowadays in affecting the public opinion and how women organizations could use media as a channel to achieve progress in the political and legislative field. Also, media can help to change some ideas and traditions related to women rights and gender equality that are deeply rooted in the society. Especially the developments of the Arab uprisings should be seen as a great chance for women to be more involved in the transitional processes and to make their voice be heard.

During the first two days the training was given by Mr. Mustafa Al Otoom, who is a journalist and chief editor that worked in various local and regional TV stations.

Mr. Al Otoom started the first session by defining traditional media channels. Subsequently, he gave an introduction on media and its important role in general as well as how it can help women organizations in highlighting their activities. Mr. Otoom stressed that media can be used as a tool to influence the public opinion and governmental policies.

The trainer gave an overview of the local and regional tools of the traditional media channels (TV, radio, newspapers). Subsequently, he asked the participants to discuss how they think media could serve their organizational work. The approach helped the trainer to fully understand the needs of the participants and their organizations and, hence, to align the training accordingly.

Mr. Al Otoom further explained the differences between press and news releases and how to efficiently conduct an article. At the end of the first training day, participants were divided into groups to write a press release as well as a news release on specific topics.

At the beginning of the first day both groups presented their press and news releases which they conducted the day before. Together with the trainer and the rest of the participants they worked on their mistakes which gave a practical dimension to the training.

During the second half of the day, the trainer focused on effective interview elements, i.e. how to direct an interview, style and content of an interview, as well as how to avoid being manipulated and “quoted out of context” by the media.

The trainer displayed a 15 minutes interview sample, which was followed by discussion about the negative and positive parts of it.

Mr. Al Sharif started his training by displaying a video which shows the importance of social media nowadays along with many interesting statistics. He elaborated on the impact of social media which gave the participants a better understanding of the power of social media and the affect it can have on their work.

Afterwards, the participants were asked by the trainer to what extent their organizations are active on social media; the results varied among not active at all and modestly active.

The social media network Facebook with 1 billion users worldwide, 48.5 million users in MENA region and 2,447,820 users in Jordan, was the first practical example during the training. The trainer showed info graphics, general and specific usages, engagement and effectiveness, marketing and advertising, as well as further useful techniques on how to use Facebook to promote the work of women organizations.

Twitter was used as the second example in this training. The social network encompasses 500 million users, counts 175 million tweets per day, and is continuously growing. The trainer showed the participants how to use Twitter and explained its basic elements, i.e., how an informative tweet looks like, how to develop public figures with twitter accounts, how the platform can be used as a tool to measure the public opinion about a specific issue etc. He also elaborated on the success and failure stories of public organizations using Twitter.

The trainer displayed statistics of the most famous organizations/ brands/ political pages/ entertainment pages/ E-Commerce websites etc. in Jordan using social media networks as Facebook, Twitter, or YouTube. He drew the attention of the audience by presenting a chart showing that social media is growing with the highest percentage in Jordan compared to other countries in the region. This, Mr. Al Sharif emphasized, should be considered as an opportunity for organizations.

Later that day, the trainer elaborated on other social media networks and how they could be used by the organizations (Instagram, Linkedin, different blogs, etc).

On the last day Mr. Al Sharif talked about the websites of the women’s organizations and how it is very important to maintain informative and up-to-date websites. He gave practical examples on the items which are considered important to run a good website.

During the last part of the training, Mr. Al Sharif summarized what are the ‘do’s and don’ts’ in social media and how the interaction between an organization and a person usually gives a specific image to the audience. The trainer also showed some live examples of the media engagement of some governmental institutions versus private institutions.

The workshop can be assessed as a great success; especially as it was based on an interactive approach. The participants themselves showed great interest in the training; they applied what they have learned during the training, and highlighted that they will use many of the skills they learned for their work in order to spread their messages and to gain wider support. 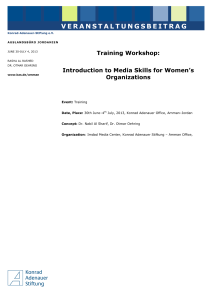