On April 30th, 2013, Konrad Adenauer Stiftung Amman (KAS Amman) and Talal Abu Ghazaleh Organisation (TAG-Org) organized a seminar on the topic of judiciary and arbitration in Jordan. Law as well as business experts with practical experience participated in the seminar to discuss the advantages and difficulties of commercial arbitration in the context of the Jordanian judiciary.
22. Mai 2013 Bestellinformationen

On behalf of Dr. Otmar Oehring

Keynote Speech: The Importance of Arbitration for other Methods of Dispute Resolution

The Reality and the Future of Arbitration in Jordan

Distinction between Arbitration, Reconciliation and Judiciary

Consultant and Researcher of Women Issues

The Relation between Judiciary and Arbitration with regard to Assistance

On April 30th, 2013, Konrad Adenauer Stiftung Amman (KAS Amman) and Talal Abu Ghazaleh Organisation (TAG-Org) organized a seminar on the topic of judiciary and arbitration in Jordan. Law as well as business experts with practical experience participated in the seminar to discuss the advantages and difficulties of commercial arbitration in the context of the Jordanian judiciary.

Legal council and court proceedings for business disputes can be time consuming and difficult to access. Arbitration is an alternative and viable legal process, providing businesses with a channel to resolve commercial disputes outside of a courthouse. Arbitrators are third-party mediators who have legal authority and whose decisions are binding. Through arbitral awards they provide a similar, and sometimes more effective service, as a judicial court. There are several advantages of using this practice, as it is often faster than court litigation, and can generally be easier to enforce in an international dispute using arbitration rather than court settlements. Jordan’s business community can use arbitrators to facilitate agreements and improve the country’s ever-increasing business environment. There is, however, a need to raise awareness on the use, benefit, but also on the challenges and difficulties of these procedures.

On behalf of Dr. Otmar Oehring, Resident Representative of KAS Amman, Nidaa Al-Shraideh, welcomed and thanked all participants and speakers for their participation and contribution. She emphasized that the workshop is already the second event on the topic of commercial arbitration as the concept of arbitration is of high importance and an effective way to solve conflicts. Also with regard to the ongoing reform process and the development of the judiciary system arbitration plays and important role.

Mustafa Nasreddin, Senior Executive Director of TAG-Org, thanked all participants for their participation and interest in the topic of commercial arbitration. He particularly stressed the participation of representatives from the judiciary that play an important role in the process of promoting arbitration. Mustafa Nasreddin further emphasized that commercial arbitration is one of the basic issues in the process of economic development in Jordan.

He further explained that due to the importance of arbitration and the simultaneous lack of such institutes, dealing or offering this procedure, TAG-Org helped and promoted the establishment of a Center for Dispute Resolution using arbitration that will be open for Jordanians from all sectors.

HE Dr. Talal Abu Ghazaleh, Chairman and Founder of TAG-Org, stressed the importance of commercial arbitration as an opportunity to resolve disputes in the commercial filed without going to court – under the precondition of course that the parties agree on solving the dispute via arbitration. Particularly with regard to the globalization and the rapid expansion of the Internet property and privacy rights are becoming an increasingly important topic. Especially intellectual property is insufficiently protected online. In this context, HE further explained that the International Chamber of Commerce (ICC), for instance, does have a court of arbitration, however, this court is not yet advanced enough to accommodate the changes and, as a result, current challenges, i.e. online rights. Although there are intuitions, such as ICANN (Internet Corporation for Assigned Names and Numbers), which mediates online conflicts there are not yet enough arbitration centers that specialize in online disputes and that are available and affordable for all kind of business companies. Therefore, TAG-Org is committed to open a ‘Center for Commercial Arbitration’ to settle online disputes aimed at protecting privacy rights and intellectual property.

The Reality and the Future of Arbitration in Jordan

Dr. Finas Al Malahmeh, Attorney at Law and Arbitrator, explained that arbitration has become an increasingly important instrument to settle commercial and civil conflicts. This has led to the adoption of various international treaties dealing with the procedures of arbitration. One of the oldest and most important ones is the New York Arbitration Convention of 1958 on the Recognition and Enforcement of Foreign Arbitral Awards. Jordan has been one of the first countries that adopted various international laws and conventions on arbitration. However, as it is not yet possible for Jordan to have its own procedural rules, it uses and depends on laws from the West that has a longer and more intense experience. Thus, although it is making constant progress, arbitration in Jordan is not yet sufficiently institutionalized.

With regard to the arbitrator him/herself Dr. Finas Al Malahmeh elaborated that due to the fact that the arbitrator has to be able to act in form of a judge to make the arbitration efficient and effective he or she has to be selected highly carefully. The Jordanian law does not set specific regulations under which conditions a lawyer could become an arbitrator, i.e. if he or she should be a specialist in a precise field. This process, however, should be more institutionalised in Jordan.

Distinction between Arbitration, Reconciliation, and Judiciary

Dr. Amjad Al Shraideh, Judge in the Ccourt of North Amman, further explained the differences between arbitration, reconciliation and judiciary. He emphasized that the judiciary is the main body in the jurisdiction. However, arbitration and (re)conciliation can be an important alternative if the conflict parties agree on the procedure. The difference between arbitration and reconciliation is that the latter one brings together two opposing parties in order to reach a compromise and solve the dispute with the attempt to avoid a court trial. Arbitration, in contrast, is a contractual remedy – and hence more binding – that is used to settle disputes out of court. Conciliation is used in labor disputes before arbitration and may also take place in several areas of the law.

However, Dr. Al Shraideh emphasized that although arbitration as well as reconciliation result in a judicial ruling, which is an alternative to the judiciary, both procedures are only an option if the case is not a violation against the general law but a dispute between two parties.

Different to a judge that is exclusively bound by the national law arbitrators can also involve laws of other countries. The decisions taken by the arbitrator are unchallengeable in principle and highly confidential. Yet, arbitration, should not be considered as a cheaper alternative to judiciary; instead, it can be more expensive. Therefore, however, arbitrators are often more specialized in the respective field than a judge. Also, it shortens the time needed to resolve a dispute.

The Relation between Judiciary and Arbitration with Regard to Assistance

Prof. Dr. Mosleh Attarawneh, who is an Attorney at Law, Arbitrator as well as Professor of International Commercial Arbitration, elaborated on the relation between judiciary and arbitration with regard to assistance.

He explained that arbitration can today be seen as a parallel judicial system that serves the interest of the state – mainly as it reduces the burden of the courts. The process should be seen as a partnership between state judiciary, as the managing partner, and the assisting arbitrational process. Assisting in the way that it does not have the preemptive power state judiciary has. However, no court is allowed to interfere in an arbitration case.

He started by elaborating that for a domain dispute that is handed to arbitration three points have to be violated: First, the domain name is identical or confusingly similar to a trademark or service mark in which the complainant has rights. Second, the domain owner has no rights or legitimate interests in respect of the domain name. Third, the domain name has been registered and is being used in bad faith. If these violations happen, arbitration is often used as an efficient alternative to solve the dispute.

In this context Mr. Sha’ban explained that within the next years new domains can be more freely used. Indeed, not all domain names will be allowed and have to be approved but the procedure will be more open. Before this process will start, however, there will be a so called ‘sun rise period’ in which trademark owners can apply before it is open for the public.

During the discussions following the sessions the participants widely commented on the speakers contributions and deeply discussed the advantages and disadvantages of arbitration. It was criticized that in practice it is more difficult, than it is often described, to find an independent and neutral arbitrator. Therefore, the process of choosing an arbitrator is highly ambiguous.

Furthermore, participants criticized the respect of arbitration for Article 6 of the Jordanian constitution. The article says that all Jordanians shall be equal before the law and that there shall be no discrimination between them as regards to their rights and duties on grounds of race, language or religion. Thus, all citizens must have equal rights and opportunities. It is criticized in this context that arbitration could violate this article as the arbitrators might, first, not be fully independent. Second, because the arbitration process might be indirectly imposed on one of the parties or, third, the conflict parties might have unequal bargaining power.

Mr. Mustafa Nasreddin closed the seminar by thanking all speakers and participants for their fruitful contributions and the insights in the pros and cons of arbitration. He further emphasized that the project and topic should be continued as arbitration represents an important procedure in the development of a legal and economic system. 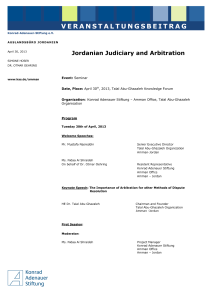