The Arab Spring and its Impact on Media

With the beginning of the Arab uprisings, a wave of optimism and anticipation for a freer and more diverse media landscape rose. Freedom of expression is a fundamental right and essential to the realization of other rights set forth in international human rights instruments. Within this context, KAS Amman and Jadal Media Training Center held a workshop to discuss the development of the media during and after the Arab Spring and its vital role in enhancing democracy, integrity, and transparency.
11. Juli 2013 Bestellinformationen

Session 1: Media Evolution in Light of the Arab Spring

Session 3: The Task of the Editor in Chief in During Crises

When a number of countries experienced uprisings in the context of the “Arab Spring”, a wave of optimism and anticipation for a freer and more diverse media landscape rose. Journalists became more courageous in tackling issues that used to be a taboo in the past. Freedom of expression is a fundamental right and essential to the realization of other rights set forth in international human rights instruments.

Within this context, KAS Amman Office and Jadal Media Training Center held a workshop to discuss the development of the media during and after the Arab Spring as well as its vital role in fighting corruption and enhancing democracy, integrity, and transparency.

During the opening, Ms. Nida’ Al Shraideh, Project Manager at the Konrad Adenauer Stiftung – Amman Office (KAS), stressed the importance of this training workshop which is aimed to shed light on the consequences of the Arab Spring and its impact on media which played a significant role in the process of change in the Arab World, particularly in those countries where old regimes were overthrown. She emphasized the significance to cooperate with Jadal Media Training Center on topics that deal with the current affairs in the Arab region and the role of media in enhancing political, economic, and social development.

Ms. Suhair Jaradat, Representative of Jadal Media Training Center, emphasized that media constantly interacted with the public uprisings that have swept the Arab world. They were united in their demands for change, reforms, and the fight against corruption - a feature of the repressive regimes. As a result, a significant increase of the use of social networks such as Facebook and Twitter could be witnessed which also led to a new discourse in the media as well as on the influence of media on political change.

Suhair Jaradat stressed that the demands of the people, such as the amendment of laws, the respect for human rights, and a stop to price increases that were spread by the media to the whole world formed a “threat” to the existence of the ruling regimes. Subsequently, preemptive measures were taken by the regimes to restrict media. Yet, also in those countries in which regimes had been toppled, new leaders are adopting similar methods to repress freedom of speech and expression, especially by imposing legal restrictions on media channels, particularly online channels.

Thus, according to Suhair Jaradat, “the fruits of the Arab Spring have not yet ripened” and the violent repression of journalists is still taking place, not just in the region but worldwide. 139 journalists were killed only in the past year; the year before it was 30 percent less. The Syrian conflict contributed to the increase of the death toll as the Assad regime has been highly repressive towards journalists covering news that are critical of the regime. As a result 36 journalists were killed on its territory.

The Legal Advisor at the Jordan Press Association (JPA) Mr. Mahmoud Qteishat elaborated on the amendments of several laws in Jordan related to the media, especially from the Press and Publications Law. He condemned the prior censorship of publications and the restrictions of freedom of expression. Yet, he also mentioned the necessity of the legal registration of websites at the Press and Publications Department as, according to Mahmoud Qteishat, “the effects of irresponsible journalism are catastrophic” which “provides the authorities with the justification they need to restrict the press.”

He further elaborated on the modifications in the JPA law, such as the amendment for the membership of employees in the audiovisual media, in the public and private sector, as well as online media personnel.

Mr. Hazem el Khaldi, Head of the Cultural Department at Petra, presented on the distinct developments in Arab and Jordanian media, especially with the expansion of satellite and electronic sites which allow for information to be circulated and reached easily by a large number of people all over the world without restrictions.

He stressed that the Arab revolutions, which succeeded in overcoming many taboos, were the natural reflection of what had happened for more than forty years with regard to corruption, dysfunction and injustice in most of the Arab states.

At the end of the workshop, speakers and participants agreed that the Arab uprisings have not achieved the outcomes the people have hoped for, noting that the fall of a dictator does not necessarily go hand in hand with the fall of the authoritarian system. They also stressed that the Arab governments are still trying to impose restrictions on the freedom of media, especially after the outstanding role media played in the process of change in a number of Arab States. 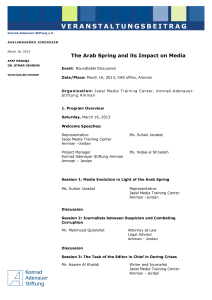 The Arab Spring and its Impact on Media (Pdf)
Herunterladen