Despite being the newcomer with its concrete inception only came in 2016, the Mekong – Lancang Cooperation (MLC) does have significant influence on the Mekong sub-region, be it economically and/or strategically. It is thus with great
importance that there is a need to have frank, balanced and constructive discussions and discourses on MLC vis-à-vis within the country’s context. It can be observed that the majority within the academic community does not seem
to have favorable views on the MLC. Some asserted that the creation paves the way for China to dominate the region. Some are skeptical of China’s goodwill acts and motives behind this emerging multilateral framework. Some stressed that China’s move to have the MLC established was in response to the increasing power competition in the region, particularly with the presence of other existing Mekong mechanisms. There is a need to look into a plausible cooperation mechanism between China, the five Mekong member states, and the external partners for collective efforts and mutual developments. By having strong political wills and economic resources available as well as shared objectives for spurring regional development whilst some other existing Mekong mechanisms have encountered resource constraints, MLC, the Chinese-backed mechanism should be welcomed with open arms as complementarities rather than being perceived as competition. More concrete and sincere determinations on the aspect of coordination between the MLC and Mekong existing mechanisms are needed. The establishment of coordination plans, fostering institutional collaborations, creating information-sharing platforms, joint special fund between the MLC and other Mekong existing mechanisms as well as jointlyhosting of Mekong Plus Summit ought to be considered. MLC’s key priority areas align very well with the Cambodia’s National
Development Strategies including the Rectangular Strategy and Industrial Development Policy (2015-2025). Some key achievements and notable progresses of MLC in Cambodia including the rapid institutionalization as well as project
implementation and fund availability. Nevertheless, some drawbacks and challenges are needed to be taken seriously into considerations including the relatively-juvenile stage of the MLC; its unequal project distribution; limited information and engagement; the blurry distinction between bilateral deals, the MLC and the BRI; fear of unsustainable investment; and concern over a potential debt-burden and hence, debt-trap diplomacy. Key recommendations can be summarized as follow: 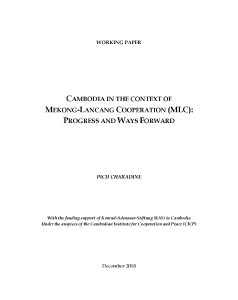