The Fourth “Georgian-German Strategic Forum” took place in Tbilisi on 11-12 May, 2015, and its participants from Georgia and Germany included policy makers from executive power and parliament, politicians from ruling and opposition parties, distinguished experts from prominent think tanks and media representatives. During the presentations and panel discussions, participants presented their views on the topical issues within the main themes suggested by 4 Panels of the Forum, as well as put forward concrete recommendations and supporting argumentation.

The main issues discussed at the Third Georgian-German Strategic Forum were: EU Association Agreement (AA) and perspectives of German-Georgian Relations, the upcoming NATO summit in Wales and prospects of a Membership Action Plan (MAP) for Georgia, Georgia’s internal political agenda, and perspectives of regional security in light of current events in Ukraine.

As the result of the discussions the following Recommendations and Observations were offered:

Recommendation 1: Launching a annual joint research program under the auspices of the “Georgian-German Strategic Forum”. The first topic to be researched and presented to the next Forum Meeting should focus on the German-Georgian bilateral relations in the context of the shared history and interests.

Country expertise on each other is lacking and the mutual political stereotypes are entrenched (Georgia is seen in Berlin as an unruly junior partner that can bring trouble, and Germany is seen in Tbilisi as the Leader of Europe that is centered on not irritating Russia), as research and academic exchange programs are very scarce and intermittent. Creation of such a program will help to start bridging this gap and lay ground for possible institutionalization of similar efforts through establishment of the research centre/chair on either side (as laid out in 4th Recommendation of the 2013 Forum Meeting) to strengthen academic ties, eliminate clichés and increase understanding, what will definitely contribute to more effective and mutually beneficial policy making.

Recommendation 2: Conduction of the next Strategic Forum meeting in Berlin and making the Forum meetings rotational between Georgia and Germany.

Despite the fact that Georgian-German Strategic Forum is only four-years old, it has established itself in Georgia as a central venue for regular informal discussions on important strategic issues of mutual interest between representatives of Georgian and German government, academia, think-tanks, parliament and media. As all four meetings of the Forum were held in Tbilisi, in comparison to German counterparts, level and number of Georgian participants were disproportionally high (acting and former speakers of parliament, acting and former foreign and defence ministers, acting and former deputy vice prime-ministers, leaders of the ruling and opposition parties and the most prominent Georgian NGOs). Above factors helped Forum to rather quickly establish a good reputation and gain prominence among the representatives of governmental, non-governmental, parliamentary and NGO sectors in Georgia, while only few people have even heard about the Forum in Germany, nothing to say about reading its Annual Recommendations.

Significant progress towards attaining the main goal of the Forum – strengthened/deepened bilateral relations via increasing the mutual understanding and facilitating a better coordination of policies – through its meetings and other activities is possible only in case of permanent engagement of higher number of prominent German participants and better coverage of the Forum’s Meetings and its work in German press. Therefore, it is highly advisable to make Forum meetings rotational between Georgia and Germany.

Recommendation 3: In case of compliance with main requirements set by European Union, Georgia must be granted the Visa liberalization Regime with EU no later than 2016.

If Tbilisi meets the relevant main requirements set by European Union, granting Georgia the Visa liberalization regime with EU no later than 2016 is a must. Failure to do so will significantly strengthen already widespread perception in the local population that EU follows Russia-first and not the performance based policy; it will also contribute to further disillusionment of Georgian population with the West, as Russia is increasingly seen by an average Georgian as a EU and NATO enlargement gatekeeper, and hence, the western integration is regarded as Mission Impossible.

Signature of the Association Agreement and Deep and Comprehensive Free Trade Agreements between Georgia and EU had definitely sent a strong message of EU’s intention to deepen engagement with Georgia, but in short term it brought few, if any tangible benefits to Georgian citizens. Conversely, the effect of EU visa liberalization will be swift, as well as tangible and therefore will influence the political calculations of local population.

Recommendation 4: Decision on NATO’s Membership Action Plan (MAP) must not be indefinitely postponed and Germany should identify the list of deliverables that according to Berlin stand before Georgia and its MAP status.

Although opening of NATO-Georgia Joint Training and Evaluation Centre by the NATO Secretary General Jens Stoltenberg in August of 2015 in Georgia is a very much welcomed development, many Georgians see it as another elaborate excuse for postponing the decision on MAP to forestall the anger in Kremlin.

7 years passed since NATO Bucharest 2008 Summit’s Decision on Georgia and Ukraine and the chances of obtaining MAP seems as slim as ever. Consequently, like Putin’s Government, most of Georgians now are tended to believe that NATO will not accept Georgia as a member until its territorial integrity is restored. As Russia holds the sway over this issue in foreseeable future, the popular inference in Georgia is that Moscow has a de facto veto power on NATO’s enlargement towards Georgia and Ukraine. In spite of continuous strong public support for NATO and EU integration, such an inference, as recent NDI poll suggests, makes increasing number of Georgians to lose hope and unwillingly opt for Eurasian Union.

Identification by Berlin of Georgian deliverables for obtaining MAP will clearly demonstrate its rejection of Russia’s sphere-of-influence approach, confirm the NATO’s performance based enlargement policy and increase support for pro-western policy in Georgia. As a result, Germany’s standing in Georgia will be also significantly enhanced, while important contribution will be made in strengthening NATO’s credibility and deterrence power.

Georgia on the Crossroad of Geopolitical, Economic and Internal Development Trends

Recommendation 5: Germany should lead EU in working out of meticulously planned, multidimensional strategic information campaign to counter Russia’s anti-western propaganda in EU’s Eastern Neighborhood. In Georgia, as in other Eastern Partnership (EaP) countries, such a campaign should be coordinated with a host government to ensure the synergy effect, as well as adequately funded and consistently implemented to ensure as large and intensive impact as possible.

Russian soft power is having a new renaissance in Georgia. During the recent years, pro-Russian non-governmental organisations have mushroomed in Georgia and intensified their anti-western activities and rhetoric. Simultaneously, different type of Russian supported media increased their activities in and coverage of the country.

These organisation and media outlets portray US and Europe as cultural homogenizers that impose the values and culture alien to Georgian population. They depict west as a force of decadence that threatens Georgian culture, traditional family values and its Orthodox Christian identity, while represent Russia as the only Orthodox Christian superpower that can safeguard these values from “perverse” western influence.

Having complex, multidimensional messaging, in certain cases they concede that western integration preferable to acceding to Eurasian Union, but underline that Georgia’s territorial problems and Russian intransigence makes western integration an illusionary goal, pursuing which can only further harm the country. On the economic side, they argue that prospect of Georgian producers to carve their share in the EU market is very slim due to their low competitiveness, while Russian market will embrace Georgian products and save the economy from downfall.

The Russian propaganda should be fought asymmetrically. Instead launching the counter propaganda efforts, led by Germany, EU must elaborate, fund and consistently implement the information strategy that will ensure regular provision to the domestic audiences of EaP countries, including Georgia, with true and actual information that will not only debunk Russian propaganda, but also demonstrate the benefits of EU and NATO integration. EU should carry out these efforts in cooperation with the local stakeholders. This means not only collaboration with the host government, but also with local independent media outlets, NGOs and think-tanks, which EU should support financially and through appropriate capacity building assistance.

Recommendation 6: German-Georgian economic cooperation programs should target the bottlenecks that prevent swift implementation by Georgia of the DCFTA and the economic part of the Association Agreement, as well as aim at some quick, even if moderate results that clearly demonstrate benefits of European integration and impact larger public in Georgia.

More than two-thirds of Georgians support their Country’s integration into the European Union, but many of them complain that so far, progress in EU integration has not materialized into any significant economic benefit for the average Georgian. The opening of Russian market to some of Georgian goods made immediate and sizeable positive impact on Georgian wine companies’ incomes and instilled hope in others. At the same time, Georgian producers do not expect much economic benefits after gaining free access to the EU market, as absolute majority of them believe that they cannot compete with EU producers due to the lower standards of Georgian products. Therefore, while aiming at the longer term, sustainable effect, German-Georgian bilateral economic cooperation should also aim at achieving some visible improvements in the shorter term, in order to make benefits of both of the agreements recently signed by Georgia with EU - Association Agreement and DCFTA - tangible for an average Georgian.

Georgian-German Business Forum should be further reenergized and consistently supported by both governments. This bilateral Business Forum, among other things, should assist Georgia in attracting longer term German investments and gaining increased access to modern German technologies and business education opportunities. The results will be mutually beneficial, as on the one hand Georgian producers will get closer to EU standards and improve their competitiveness, and on the other hand German companies will gain via Georgia better access to the South Caucasian and Central Asian markets.

About the Georgian-German Strategic Forum

The Konrad-Adenauer-Stiftung and the Atlantic Council of Georgia are initiators of the Strategic Forum and act as organizers. The Forum will hold meetings at least once in a year. The first meeting was held on May 2-3, 2012. It applies strict observance of Chatham House Rules.

The Forum acts as a non-governmental forum that brings together representatives of all sectors (academia and think-tanks, government, parliament, media) from Germany and Georgia and focuses mainly on the security policy field. The main goal of the Forum is to strengthen and deepen bilateral relations between Georgia and Germany through further improving the partnership, increasing the mutual understanding and facilitating a better coordination of security policies.

The Forum is intended to serve as a permanent venue for discussions on important strategic issues of mutual interest. Policy recommendations will be elaborated, as well as adequate bilateral projects launched and implemented within its framework.

When deemed useful, on a case by case basis, the Forum can decide to also involve experts and/or policy makers from other countries in its work, especially when this contributes to a better understanding and helps to bring closer the positions of Georgia and Germany on important security policy issues. 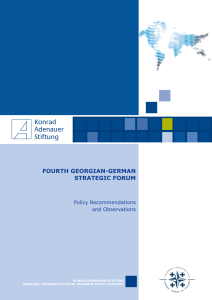