The State of Multiparty Democracy in Uganda

An assessment of the state of multiparty democracy in Uganda before the 2011 elections focussing on the historical, legal and institutional context as well as the performance of the political parties as actors in the democratic system. The publication consists of four papers by experts which were presented at a public dialogue in Kampala in October 2010 as well as a synthesis of the disucssions at the dialogue.
1. Januar 2011 Bestellinformationen

The year 2011 marks a six-year anniversary of the legal

reintroduction of multiparty democracy in Uganda after the

referendum held in 2005. This according to the country’s

election takes place, following the first one held in 2006.

Such a period is to be recognised as a milestone particularly

in a country still working on several aspects of democratic

being one of them.

The Konrad-Adenauer-Stiftung considers this publication as

being one of the ways to recognise and celebrate six years

since the reintroduction of political pluralism in Uganda.

The book Reality Check: The State of Multiparty

Democracy in Uganda is an outcome of a symposium on

the subject held in Kampala in October 2010. It brought

together academicians, politicians and civil society actors as

a platform for meaningful dialogue regarding the advances

of and challenges to multiparty democracy in the country.

In this publication the papers as contributed by academic

experts and political actors are presented together with some

general introductions and a synthesis of the discussions that

While the dialogue at the symposium covered a range of issues,

the main contributions and synthesis of the discussions have

been organised along two main themes: The first theme which

is the part one of this publication focuses on ‘the institutional

political system and environment’ where the main topics are:

■ the extent to which Uganda has transited from the

movement system to a multiparty state;

■ the checks and balances to power and how far

these are sufficient to ensure successful multi-party

■ the extent to which a political level playing field been

Part two of the publication focuses on the political actors

operating within the environment. In this context it is

analysed to what extent the political opposition presents a

reflection about the state of Uganda’s multi-party democracy

is both timely and relevant. This relevance goes beyond

celebrating six years since the reintroduction of multiparty

democracy. It is also to be noted that - as the second

multiparty elections are held - a debate on the advances and

challenges of the political system is relevant to guide yet

another decisive step in the maturation process of democracy.

Much as the new multiparty dispensation is still rather young,

the experiences Ugandans have with multiparty politics date

back to the times shortly after independence. There have

been several expressions both in literature and the political

rhetoric within Uganda that these early experiences are not

something that make the people look back in pride. Instead,

the challenges that were experienced in the past remind

all stakeholders of the fragility of an open and competitive

political system and its reliance on committed, responsible

and credible actors on all sides and at all levels.

This book is prepared as a reference point for scholars, policy

makers and political actors desirous to gain a deeper insight

into the salient issues of multiparty democracy for the second

time it is practiced in Uganda. Dr. Sabiti Makara and Dr. Yasin

Olum who present the main contributions in the first part

are renowned political science scholars. They have proved

their credence once again by clearly interlinking theory and

practice in an assessment of the political environment. On

the other hand, Mr. Awel Uwihanganye and Mr. Omar Kalinge

Nyago tap on their political experience to analyse the political

actors. Both parts have a general introduction presented by

whose vast experience working on democracy promotion in

Uganda is clearly reflected in their contributions. With such a

team of experienced contributors the content is expected to

be enriching. Special thanks go to Max Walter, who was not

only involved in the conceptualization of the symposium and

the publication but also provided the idea for the title “Reality 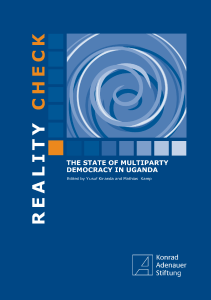