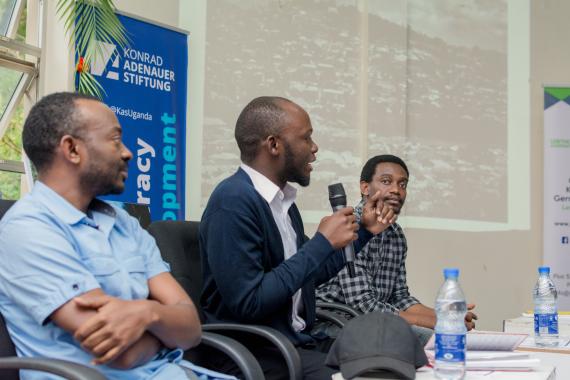 Panel Session with the Panellist
A pre-symposium photo contest was organized to provide a platform for emerging photographers in Uganda to share their perspectives on the vision on and of the middleclass in Uganda. The contest was meant to let the photographers portray their understanding of the concept, opportunities of and challenges faced by the middleclass. Dozens of photos were received and a jury of three top Ugandan photographers - Jjumba Martin, Kibuuka Mukisa, and Tony Muziira selected three best photos.

To Stuart, the definition of the a middleclass is confusing but what he is certain about is that being an influential person, being productive, being a leader and providing employment opportunity to people is to me a sign that someone belong to the middleclass category. ‘’And these are characteristics that embody the barber in this picture’’ he concluded.