Late in 2016, a heavily pregnant Anna Lakong fledthe civil war in South Sudan. Her husband belongedto one of the fighting groups, so he escorted her tothe border. He did not continue with the journey intoUganda but returned to South Sudan, to fight.
23. Juli 2018 Bestellinformationen

“I was relocated to a refugee settlement in Adjumani

(district) and assured that I would deliver my baby

in a health centre,” Lakong says. She adds, “When

my husband sneaked across the border for a visit, he

complained that I was getting too comfortable in the

settlement and feared that Ugandan men would steal

The next time Lakong saw her husband, she had

just given birth two weeks prior. He came with his

gun, entered the settlement, and commanded her to

follow him to a lodge. Since she had arrived alone

and pregnant, Lakong had been allocated a shelter

with other refugees. “He demanded to have sex with

me. I told him that I was not ready, since I had just

delivered. He did not listen but forced me to have sex

rapidly until I was totally shattered.”

After the ordeal, Lakong felt so degraded and scared at

the same time, yet she could not tell anyone. “In our

culture a woman cannot say no to a man,” she says. It

took her three weeks of agony before she could get in

touch with a social worker to confide in. “At that point,

says. “I wanted to commit suicide.”

In war situations, women and girls are vulnerable to sexual assault, exploitation and limited access to protection. The United Nations High Commissioner for Refugees (UNHCR) reported in January 2017 that rape and sexual abuse of women and girls were some of the primary reasons for many South Sudanese to flee their country to Uganda.

The Uganda Refugee Act, 2006, stipulates that refugees are entitled to equal enjoyment and protection of all human rights and fundamental freedoms in economic, social, cultural, civil or any other fields as provided for in the constitution and other relevant laws in Uganda. According to a Joint Submission by the Lutheran World Federation in 2016 to the UN Universal Periodic Review, a number of refugee women still experience domestic or gender-based violence (GBV). Close to 78% of refugee women experience domestic violence, mostly at the hands of men.

Isaac Etoku, a psychosocial support officer with Uganda Red Cross Society based in Adjumani, says sexual harassment occurs when women go to the bushes to collect grass as building materials, or to collect firewood, or go to the well or to the garden to till the land. Women, who are the main tillers of the land in this part of the country, suffer sexual harassment, particularly during the rainy season. Then, Etoku explains, the number of rape cases increases because the grass in the fields is tall and hence provides cover to the rapists.

Kennedy Apenyo, a senior clinical officer with Pagirinya Health Centre III in Pagirinya Refugee Settlement (Adjumani district in Northern Uganda), says every month 10-15 cases of defilement are reported. Most of these involve children who arrived unaccompanied from their country of origin.

Etoku says forced marriages are rampant despite the fact that local NGOs sensitise the masses on the dangers of such a practice. “Families are more concerned with getting dowry than protecting their daughters,” he says. “They do not report cases and if a social worker identifies one such case, parents claim the girl is above the age of consent.” He notes that in the absence of birth certificates as proof of age, the cases reported to the police and prosecuted in court are usually lost.

Although details are scanty, social workers in refugee camps or settlements have reported an increase in the ‘sex for food’ phenomenon. UNHCR reduced the rations it offers to the refugees because of the increasing numbers of new arrivals, coupled with underfunding. This mainly affected women. Contracted service providers in economically superior positions tend to prey on women and girls, extracting sexual favours in exchange for food.

Pascal Pio Alor, commandant of Ayilo II Refugee Settlement in Adjumani, says other cases of GBV are caused by economic strife. “People have no means of earning a living in the settlement. They mostly depend on UNHCR for food. We allocate plots of land which women till. At harvest time, they take the produce to the markets. However, this causes violence in some homes because it is unimaginable for a woman to have money when her husband is penniless.”

Jean Asipkwe, the Executive Director of Community Empowerment for Rural Development (CEFORD), a local community organization based in West Nile , adds, “Economic exploitation of women also occurs when a partner decides to sell the food ration meant for the family and then, spends the money on alcohol. The family staves and misunderstandings arise, which sometimes results into conflict and violence.”

Peter Eceru, an Advocacy Officer with the Lutheran World Federation, says the prevalence of strong patriarchal cultures fuels the assaults on and exploitation of women. Refugees come with cultures some of which permit teenage marriage and domestic violence. In the case of South Sudanese refugees, while the majority of the men return to South Sudan to fight, the few who stay on in the settlements reinforce these cultures. These men, Eceru says, accuse social workers of spoiling their wives by teaching them about human rights.

Rachel Angucia, a 35-year-old mother of six, has never used a family planning method because among the Madi, giving birth to a small number of children is considered a curse. “I have to keep on producing children to justify the number of cows he paid for my bride price,” she states.

“I always go to the health centre to listen to the social workers talk about family planning,” laments Angucia. “But my husband does not allow me to use any method. Recently, the health workers invited the men in the settlement to talk about the number of children one should give birth to. My husband was one of only seven men who turned up.”

Angucia, who is six months pregnant with her seventh child, can only hope that her husband heeds to the family planning message he received. Or at least that her daughters will not suffer fates, such as rape, that many girls have suffered, but instead grow up in a world free from all forms of violence against women.

Like Angucia, many South Sudanese refugees do not enjoy their sexual and reproductive rights. Use of contraceptives, for example, is not considered a priority because women must keep producing children to replace people killed during the war. It is a demand imposed on them by their husbands and culture. 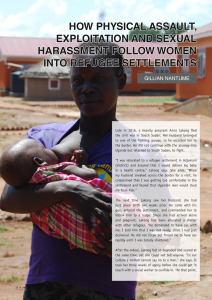