Stakeholders discuss the impact of digitalization for the public transportation sector in Kampala. 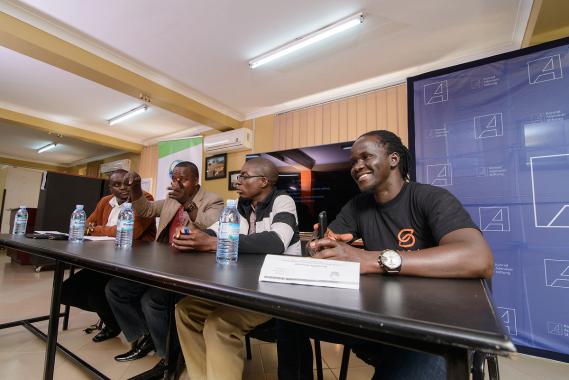 After the opening remarks of KAS Programme Officer Donnas Ojok, the morning continued with an input presentation about „Safe Boda“ a company, that revolutionized the Ugandan transportation sector within two years. Co-Founder and CEO of Safe Boda rapa Thompson Ricky shared his story: “I was first in the family to buy a boda, and my dream was always to become a boda boda driver. With my first money, I bought my own boda. And then I had the idea to make a business out of it. So I knew what I had to do: Buy Bodas, get drivers and train them.“

Ricky mentioned, that the impact of digitalization came as an afterthought: “At first, Safe Boda was supposed to be organized by a call center. But then I met my Co-Founder and instead of doing a callcenter, he suggested an app such as UBER. So I knew social media, and I thought it was a good idea. We came up with a digital system, that enables you to get fast and safe from one place to another. Now we are having a call center and an app, but the app is doing much better.“

„Each day, there are thousands of Boda accidents, that is one of the biggest problems with Bodas“, said Ricky. „So we knew, that our drivers have to be trained. We need to set the minimum standard. Therefore, we have a big training center with the equipment. We designed the training center so it fits to the needs of the drivers.“

And the digital nature of the app solves another problem of the Ugandan transportation sector: „With a regular Boda, you never know where they are going or where they come from. Once, a boda driver took my phone and I had to run after him, otherwise it would have been lost. The app tells you the name and number of the driver, so you have a reference and a security.“

Juna, a Safe Boda driver, talked about his experiences “Once I had a friend, but he died in a boda accident. Back then, Safe Boda was not yet invented. Boda drivers were very reckless. I am confident, that if the system would have been there, he would still be alive.“ Juna moreover emphasized the advantages of the company: „Today I feel respected in my job. I learnt how to use a smartphone and I was also trained in English, so I could communicate with our customers. Since I started with Safe Boda in 2014, I could increase my income so that I can send my children to a better school today.“

Since the app Safe Boda came to the market, it changed the whole transportation system in Kampala. Other companies like “Taxify“ or “Uber“ followed. The fast change of the market also had its consequences for regular boda drivers, such as Fred: „I‘ve been a boda driver for eight years now. You know, the regular bodas also have a system of leadership. Certain drivers are in certain districts, we organize ourselfs via phone calls. But with the digital competition came new challenges. Some of us regular boda drivers are used to the traditional organizational structures and do not feel confident in adopting digital systems.“

The example of Safe Boda shows, that digitalisation is forcing public transport operators and official authorities to redefine their businesses, mentions Eng. Sengendo, Civil Society Coalition on Transport. „Just by virtue of traveling by Safe Boda you automatically feel safe and secured. The boda boda sub-sector is the second largest employer in Uganda only after the agriculture sector. Regulating it and ensuring its effectiveness is thus a key policy issue.“

After the input of the speakers, a plenary discussion was opened. Main issues of the audience were addressed, such as how to ensure gender equality in the transportation sector, how to use digitalization in a way that includes parts of society, that do not have access to the internet and how to make sure, that the data is being protected by the companies and the state.

Following, David Kasimbazi, representative of the Ministry of Lands, Housing and Urban Development shared the nexus between Uganda‘s urban development policy and digitalization. “One of the key constraints of the Ugandan economy are delays caused by traffic. Digitalization can be used to help this challenge. But in order to incorporate digitalization in the Ugandan transport sector, stakeholders from the private and public sector, as well as civil society have to work together. Only with an efficient and uninterrupted transporttional system can the transportation sector contribute to transforming Uganda into a middle income country.“

Overall, the roundtable discussion helped important stakeholders of the public and private sector as well as from the civil society to enter into a dialogue about the role of digitalization in the transportation sector. Therefore, the event can be rated as successful.