A Comparison of German Social Market Economics vs. US‑Style Capitalism during the Covid-19 Pandemic

The economic realities of 2020 have given the German social market economy and the United States’ more laissez-faire oriented economic systems a stress test like nothing since the Great Depression of the 1930s. A comparison of the tools used by Germany and the United States can offer help in understanding how better to prepare for the next crisis.
30. Dezember 2020 Bestellinformationen

While neither Germany nor the United States was positioned to engage in “shock therapy” to stem the Covid-19 pandemic, Germany was structurally better situated to manage key aspects of the crisis than the United States.

On the epidemiological side, Germany’s overall adherence to science (including rapid development and deployment of mass testing), effective public-information campaigns, and high levels of public adherence led to a more effective initial response phase than in the United States, and has resulted in a significantly lower death rate (only 20-25 percent of the American rate at the time of publication).

On the economic side, Germany can expect the Covid-19 crisis to generate shocks to GDP, growth, and other macroeconomic indicators on a similar scale to the United States. In terms of public-policy tools, however, Germany’s ability to rely on time-tested programs like Kurzarbeit (its short-time work scheme), stable universal health insurance that is not job-connected, and strong protections for tenants, give it a structural advantage over the United States to handle other downstream economic consequences of the pandemic. Despite the depth of the current crisis economically, rates of German unemployment and uninsured have changed very little, while in the United States they have undergone historic disruptions.

Kurzarbeit and universal health insurance have deep roots in Germany’s social market economic philosophy – which seeks to harness the benefits of market capitalism while simultaneously restraining its worst excesses. We conclude that far from socialism (which embraces central planning, the nationalization of the means of production, and the idea of equal consumption justice), a well-functioning social market economy is market-based and pro-competition. Indeed, the element of solidarity that distinguishes the social market economy from laissez-faire capitalism is exactly what makes it a more competitive economic order. Behavioral studies confirm that human nature is most aligned with a market-based economy that also accounts for substantial levels of solidarity and social responsibility.

In the United States, the public-policy tools needed to prevent large-scale pandemic fallout have developed more incrementally and are far more induced by crisis. The American health insurance system is, at bottom, tied to employment and hence job loss often leads to the loss of health coverage. Safety-net coverage such as Medicaid requires Americans to enroll in a new health plan, and eligibility can vary based on one’s state of residence. The principal tool to prevent mass unemployment during the Covid-19 crisis was developed and enacted in a matter of days, and has been plagued with design flaws. Evidence suggests that a wave of evictions could begin in January 2021, once a current moratorium on evictions expires.

We conclude that the United States could only benefit from the adoption of more forward-looking social-market economic tools, but American policymakers often misconstrue the economic benefits of a well-ordered social-market economy by mistakenly conflating it with Soviet-style socialism. This represents a stumbling block that will likely only continue to worsen in the short term, as political debate in the United States is marked by increased political polarization and lack of reasoned debate.

As such, increased transatlantic dialogue between policymakers from both Germany and the United States is essential, in order to recover from the Covid-19 crisis and to prepare for the next global pandemic. Regardless, American policymaking will likely continue to be marked by instability and incrementalism, making long-range preparation for future pandemics challenging. 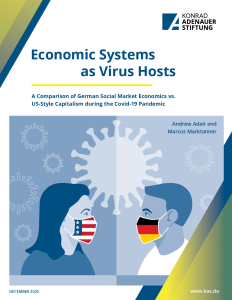