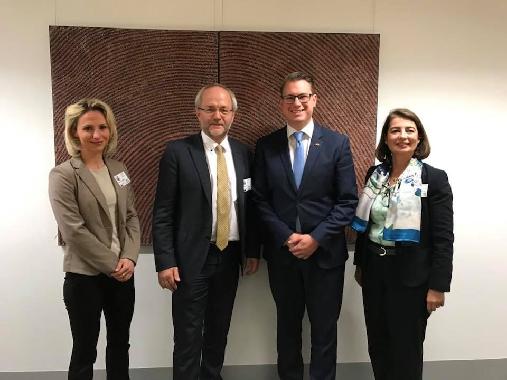 On invitation of the Konrad-Adenauer Foundation, German MP Volkmar Klein travelled to Australia(Canberra, Melbourne, Sydney and Adelaide) for the purpose of a political dialogue programme with Parliamentarians and political decision-makers from Australia. This included roundtable discussions with experts centered on the current political, socio-economic and security challenges faced by both countries as well as in the wider region. MP Klein is the re-elected Chairman of the former German-Australian-New Zealand Parliamentary Friendship Group at the Bundestag which has now been renamed to German-Pacific Parliamentary Friendship Group. The onus of all the events has been on safeguarding the momentum behind the bilateral relationship as both countries are undergoing political changes and are facing similar challenges in the broader context of security, politics, economics and culture. In Adelaide, this included a meeting with the Hon Stephan Knoll, Minister for Transport, Infrastructure and Local Government in South Australia as well as the opportunity to visit the Tonsley Innovation District where leading research and education institutions, start-ups, established businesses, government and the wider community are connected to collaborate and create new ideas together. In Canberra, various political meetings and an academic roundtable discussion proved fruitful in regards to enhancing the bilateral ties between both countries. The visit to Sydney took us to the NSW Parliament House for discussions with politicians at the state level, followed by an exchange with representatives from the German expat community. Finally, in Melbourne the focus was on the opportunities afforded by free trade, with MP Klein giving a keynote speech at the Australia-Germany Business Summit which was organized by the German-Australian Chamber of Industry and Commerce. Rounding off this whirlwind tour of Australia was a visit of the exhibition “Dynamics of Air”, which was organized by the Goethe-Institute Australia.