4th Chanakya Chakra Forum: Towards a Secure and Prosperous Indo-Pacific

by Alina Moser
On 4th December, the 4th edition in 2019 of the Chanakya Chakra roundtable discussion, a discussion forum on foreign and security policies, was held to discuss current developments and security challenges in the Indo-Pacific.
December 12, 2019 Ordering Information 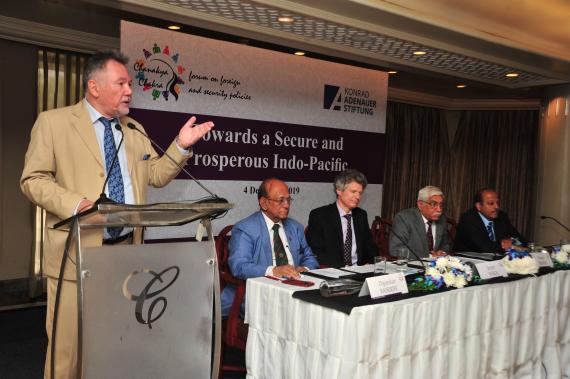 Mr. Peter Rimmele, Resident Representative of KAS India Office, together with members of the panel 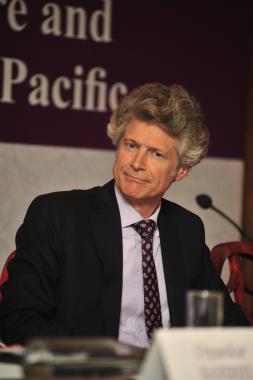 Dr. Jasper Wieck, Deputy Chief of Mission of the German Embassy New Delhi, was also among the panelists 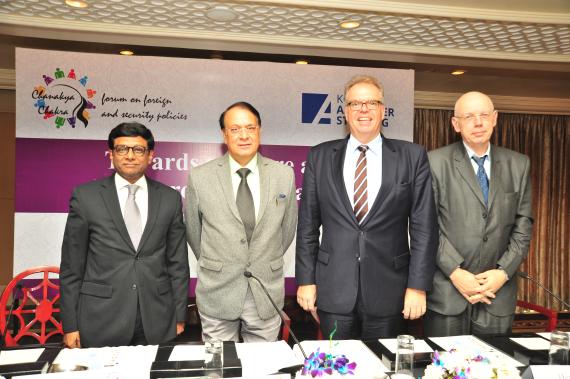 Members of the panel 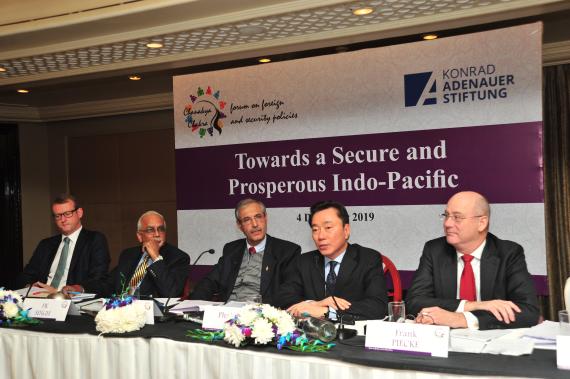 Members of the Panel 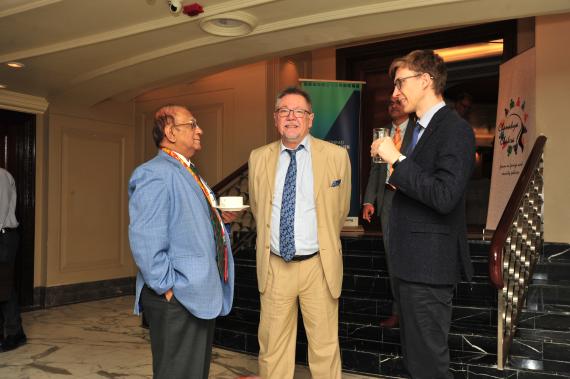 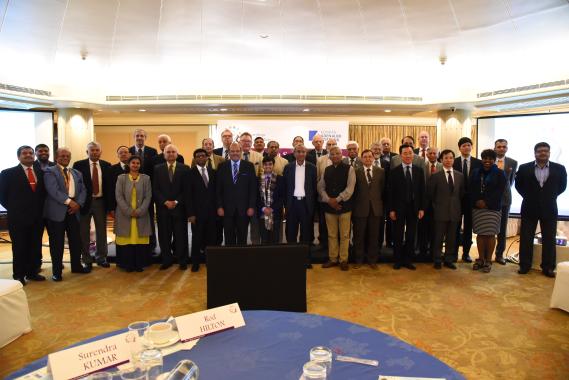 Group picture of the participants of the seminar

The developments in the Indo-Pacific concern the world as a whole. Thus, it is critical to safeguard security, stability and peace in the region. This edition of the Chanakya Chakra Forum once again enabled various experts, researchers and strategists from India, Europe and the Indo-Pacific region to discuss how security and prosperity in the Indo-Pacific can be achieved and maintained in the future. The roundtable discussion was jointly organized by a consortium of leading Indian Think Tanks which includes CENJOWS, CLAWS, CAPS, KIF, NMF, the Forum for Strategic Initiatives and the India Office of the Konrad-Adenauer-Stiftung.

When discussing the Indo-Pacific one cannot circumvent China. The fact that China is expanding its presence in the region by threading its “string of pearls strategy” consisting of naval bases and ports worries other stakeholders in the Indo-Pacific. Due to China’s claim of almost the entire South China Sea, fishing rights, trading routes and the access to natural resources are at stake. It was repeatedly stated by the panelists that it was crucial to promote and safeguard international rules and norms like the freedom of navigation and overflight. Overall, the ultimate goal was to achieve and maintain a free and open Indo-Pacific. As per the panelists, tackling the security challenges posed by China should not be seen as a clash between democratic and authoritarian states. Ultimately, it was about realistic power, which is why it was critical that the countries in the Indo-Pacific joined forces beyond ideology in real terms. In particular, the Quadrilateral Security Dialogue (Quad), a Forum consisting of the USA, Australia, Japan and India, was identified as an important contributor to security in the Indo-Pacific. The fact that the alliance was raised to the ministerial level further reinforces its relevance. However, it was also highlighted that India should not make a binary choice between development centered ASEAN centrality and the security alliance with Quad. Both could coexist and are vital for securing stability in the Indo-Pacific. As some members of Quad are mostly concerned about the maritime, it should not be overlooked that China also pursues its interests in the continental dimension. As a direct neighbor to China, it is therefore particularly important for India that the discourse on the Indo-Pacific region does not revolve solely around maritime issues.

For the European Union (EU), the Indo-Pacific is less a geopolitical entity but a functional space with huge diversity and crossing value chains, a low level of integration as well as different developmental challenges. The EU’s welfare is highly depended on open and functioning shipping lanes/routes in the Indian Ocean and the South China Sea. Thus, it is in the EU’s interest to contribute to stability and peace in the region, an interest that it shares with various other countries including India. After the Second World War, Europe too was a highly fragmented region. However, the EU was able to unify hostile countries and therefore, to transform a high-tension region into an area of peace and prosperity. According to the experts, shared prosperity achieved by economic and trade integration was the best foundation for peace and the EU was willing to exchange knowledge with other countries to identify best practices on the basis of which future regional integration in the Indo-Pacific could be implemented. This form of cooperation does already exist within ASEAN and could be established with other multilateral institutions like the Bay of Bengal Initiative for Multi-Sectoral Technical and Economic Cooperation (BIMSTEC) or the Indian Ocean Rim Association (IORA).

Trade and connectivity were identified as key issues in the Indo-Pacific. Regarding the Regional Comprehensive Economic Partnership (RCEP), it was argued by the panelists that three factors contributed to India opting out of the Free Trade Agreement, namely the negotiation dynamics, domestic political factors as well as geo-political factors. Although the negotiations presented difficulties, it was argued that the final word on RCEP had not yet been spoken. Yet, the panelists did not agree on whether free trade really was the future for the region. There was consensus, however, that regional integration will be crucial for prosperity and security in the Indo-Pacific. The different connectivity strategies of stakeholders in the region will determine as to what extent integration will be possible. According to the panelists, China’s Belt and Road Initiative for instance would weaken multilateral organizations in the Indo-Pacific. It was stated that connectivity was no longer about who builds the better roads. Rather, a shift in competition from hard connectivity to soft connectivity could be observed. This changed focus on connectivity will make the EU an even more important player in the Indo-Pacific.

The discussions were held under the Chatham House Rule.

4th Chanakya-Chakra-Forum – Towards a stable and prosperous Indo-Pacific