by Ann-Margret Bolmer
On December 4th, 2019, Delhi Policy Group (DPG) and Konrad-Adenauer-Stiftung (KAS) India jointly organized the conference on “Regional Frameworks to Address Security Challenges in the Indian Ocean Region and South East Asia”. It was the second event jointly held by the two partners, addressing regional challenges within the Indo-Pacific from an international viewpoint.
December 13, 2019 Ordering Information 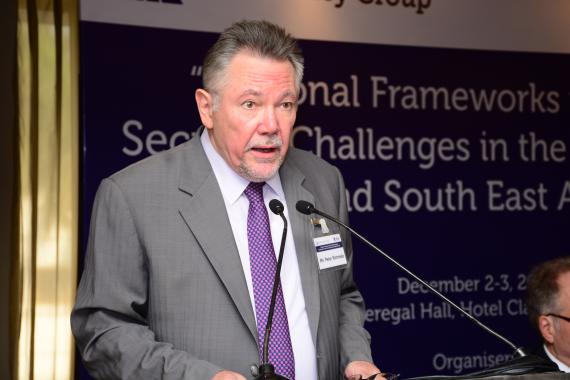 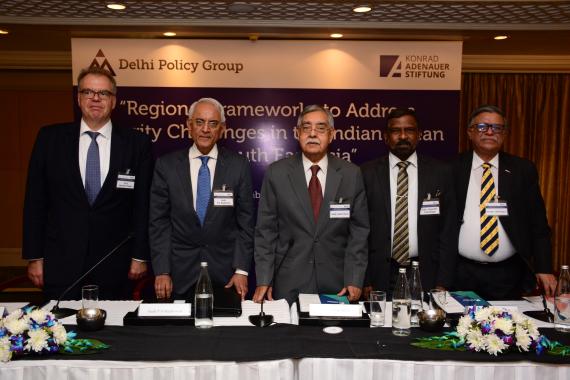 One of the event's many panels 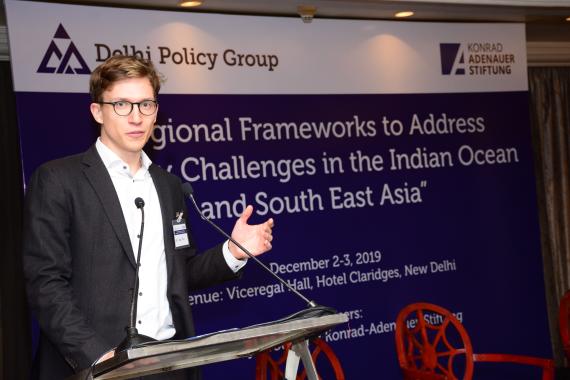 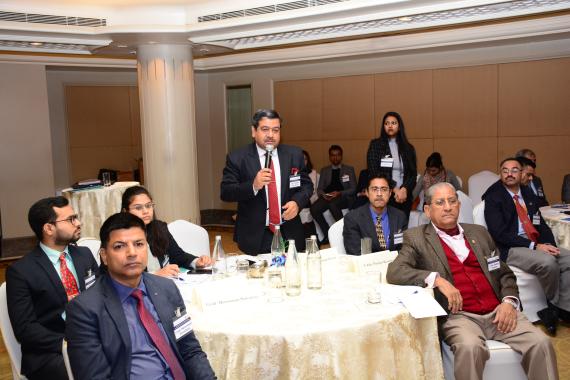 The audience took also part in the fruitful discussions 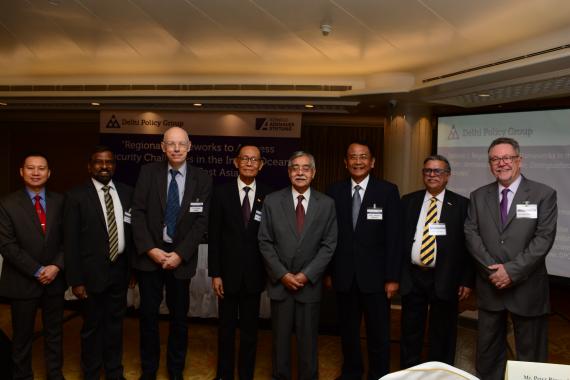 Some of the distinguished experts and strategists who attended the conference 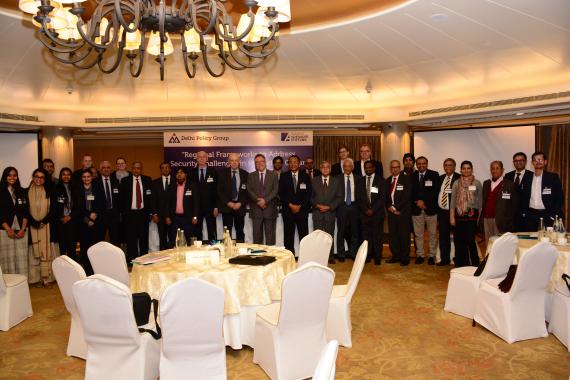 Group picture of everybody who was part of the event

The conference kicked off with an inaugural session on December 1st, where Peter Rimmele, Resident Representative of KAS to India and Ambassador Nalin Surie, Distinguished Fellow at DPG, reiterated their support to the format and stressed the need for a continuous dialogue on security challenges in the Indo-Pacific.

The following day was divided into four thematic sessions. Peter Rimmele opened the floor by giving his remarks on the importance of regional organizations in light of China’s growing power. Ambassador Suri, the second speaker, built further on security challenges by advocating a regional approach towards governance, given the current security contestations in the Indo-Pacific-Region.

In the first session on Regional Security Frameworks in the Indian Ocean Region (IOR), the strategic potential of regional organizations, security challenges in the IOR and Indo-Pacific region, and the global power shift towards the Indian Ocean were assessed. While the Indo-Pacific region’s, and by extensions also the IOR’s security framework has been disrupted by the end of the US’ hegemony in the Asia-Pacific, the Indo-Pacific is now being considered the main theatre for the 21st century. Power claims by major powers like China and India as well as smaller littoral states and former residential powers like England and France have to be balanced. An industrial shift towards the South-East-Asian region strengthens further the importance of the IOR, while ASEAN’s geopolitical role will influence the future security framework in the region. In this context, India has to take upon a multifaceted role: Enhancing the connectivity in South-Asia, integrating Russia into the region to counter China, taking a lead in regional cooperation mechanisms like BIMSTEC and QUAD and investing into smaller states, with the goal to prevent Chinese investments into the latter. Furthermore, attention was drawn towards the EU’s slow reaction to the Chinese Belt-and Road-Initiative (BRI).

The second session was on Maritime Security. Center of this discussion was China’s maritime dominance of the South China Sea.  While the Middle Kingdom becomes increasingly aware of its power monopoly on both sea and land, the US’ presence in the region is in a constant decline. For many, this raises the question if China having already emerged as the new hegemon of the Asian continent. The increasing threat posed by China's economic relations within the framework of the BRI is still not countered by a uniform EU-strategy. Within the Union therefore, a non-traditional strategic scenario is evolving wherein smaller states like the Netherlands and Sweden develop security solutions to counter Chinese influence in Europe while major European powers like France and Germany are still reluctant to respond. Furthermore, China’s rise to power and tensions between China and US put a focus on the EU’s lack of self-confidence in regard to its strategic autonomy. To be treated as an equal partner by China, the EU must venture out under the US’s security umbrella.

To further elaborate on Modi’s proclaimed “Act East Policy” in session three, perspectives from ASEAN experts on regional cohesion were discussed.  With the “Act East” policy, announced by Prime Minister Modi in 2014, India laid the foundation for an enhanced cooperation with its Eastern neighbors. This also became apparent in 2018, when India and ASEAN commemorated 25 years of Dialogue and the ten ASEAN heads of states attended the 69th Indian Republic Day parade. The two players are not only united in values, but share a common opponent/trading partner in the Indo-Pacific. Both the ASEAN member states as well as India work towards an increasing economic and cultural relationship, and aim to strengthen the strategic partnership by planning and executing joint military exercises. The past has shown how successful this cooperation can be when, for example, the ASEAN Plus "Exercise Force Eighteen" was held in March 2018. Furthermore, ASEAN, with India as its partner, furthermore upholds the rules-based international world order in the Indo-Pacific region, where Chinese-led Asian Investment Infrastructure Bank and the Belt-and-Road- Initiative are getting a foothold, too.

The last session raised the question of Competing Connectivity Visions. At the beginning of the debate the distinction between soft and hard connectivity was highlighted. The general opinion of the EU not being present in the Indo-Pacific region, ignores the fact that it works within the framework of “soft connectivity” through alternative instruments. This reflects in EU-investments into BRI countries, which, accumulated, are as much as Chinese investments. Hard connectivity plays an essential role for landlocked countries, which rely on well-developed infrastructure on land. Nepal, however, suffers from the lacking support of its regional neighbors. Therefore, Nepal’s focus clearly lies on connectivity and infrastructure and its wish to enhance connectivity cooperation with India. The general message of the session was that India should be more active in connectivity cooperation in the region if it is to prevent increased Chinese dominance.

The event was concluded with a Summary Report by Rapporteur Sanjay Pulipaka, Senior Fellow, Nehru Memorial Museum& Library, a Vote of Thanks was given by KAS Desk Officer for South Asia in Berlin, Lewe Paul, and Concluding Remarks by Ambassador Nalin Surie.