KAS Israel launched a new workshop series on the topic of European-Israeli relationships: “The Adenauer Young Foreign Policy Network”. The participants included representatives from different European embassies, NGOs and think tanks, as well as journalists and scientists. Jonathan Miller, Director of the Department of Multilateral European Organizations at the Israeli Ministry of Foreign Affairs, gave a lecture on EU-Israel relations and discussed the current state of this partnership and future challenges.
April 24, 2018 Ordering Information

After a short welcoming speech, Dr. Alexander Brakel, Head of the KAS Office in Israel, presented the principles and guidelines of the Konrad-Adenauer-Stiftung and its work in Israel which led to the discussion of European-Israeli relations. This new project aims at gathering innovative ideas and impulses to improve and further strengthen European-Israeli relations by linking European and Israeli young professionals in the field of foreign policy.

Jonathan Miller presented an extensive overview of the foundations as well as perspectives and current challenges of European-Israeli relations. At first, he explained the historical landmarks of this multilateral cooperation before pointing out the dimensions of this partnership. With an export volume of about 16 billion euros, the European Union is Israel’s most important trading partner. Common interests such as the fight against terrorism, form the base of cooperation. Current challenges such as energy security and environmental protection also present new opportunities for enhanced partnership.

The following development in the political dialogue between the EU and Israel was particularly discussed: In January 2016, EU foreign ministers unanimously agreed to implement the two-state solution and formulated it once again as the goal of their Middle East policy. According to Miller, this would have stagnated cooperation between Israel and the EU and increased only bilateral cooperation with individual EU states. The trend among member states to transfer “unpleasant” issues from bilateral level to the EU level is another obstacle to deepening multilateral relations. Nevertheless, there is great understanding of common interests and multilateral cooperation potential both in the European Union and Israel.

On one hand, its “soft power” is what makes the European Union attractive to the Israeli public as a community of values. On the other hand, the European Union shows great interest in Israeli expertise, for example in security issues or in the start-up and high-tech sectors. As a western orientated country, Israel is the EU’s first partner in the Middle East. Miller ended his lecture by returning to the question “Can we live with(out) each other?”, initiating a Q&A session with the participants.

After a short break, an intensive group work session followed. During this task, the participants elaborated relevant topics regarding the elaboration of a policy paper. The main findings focused on greater gender equality in political positions and positions of power, the demand for "linkage", the interconnection of different policy areas, as well as the enhancement of mutual public perception and the complexity of EU-Israel relations. 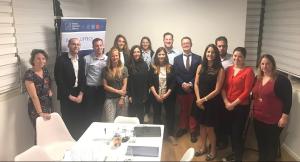 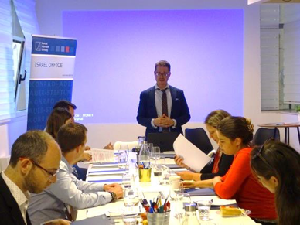 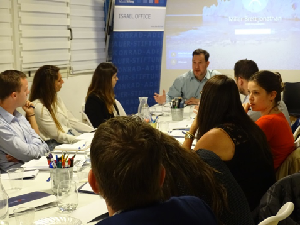 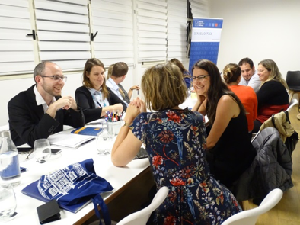