On 20 January 2013, the Minerva Center for Human Rights at the Hebrew University Jerusalem together with KAS Israel organised a guest lecture on the topic of the Rwandan media before and during the 1994 genocide. Dr. Zachary D. Kaufman (George Washington University) spoke about the topic and the concept of “Social entrepreneurship” as a contemporary response. The lecture offered an example of this concept in the newly inaugurated Kigali Public Library. Dr. Kaufman – himself a social entrepreneur – serves on its Board of Trustees.
January 20, 2013 Ordering Information

The Rwandan genocide is probably the most vivid example where the media was employed as a weapon, resulting in the murders of up to one million people. The incitement against the Tutsi population of Rwanda through the media was also persecuted in the International Criminal Tribunal for Rwanda. Throughout the one hundred days of genocide the Radio and print media played a crucial role in inciting the Hutu population and even in giving specific instructions on how to kill. The tragic success of this hate campaign can be traced back to a low literacy rate in the population, to the distribution of radios and to the fact that people had few possibilities to verify facts and so-called news.

Dr. Kaufman explained that because of this, the local media was responsible for the first phase of the genocide. i.e., the incitement of the population. Particularly the French language newspaper “Kangura” as well as “Radio Rwanda” and “RTLM – Radio Télévision Libre des Mille Collines” played the decisive role in stigmatizing, dehumanizing and demonizing the Tutsi population. The radio broadcast news that could not be verified by the population. RTLM appeared to be very popular because of its lively music, interviews and gossip and were responsible for giving the Tutsi population dehumanizing names and accused Tutsi of planning a genocide against the Hutu. This incitement was followed by a deliberate campaign to orchestrate genocide. First, the Hutu were urged to kill Tutsi; second, specific instruction was given as to how this could be done; third, detailed information on the location of individuals or groups of people were broadcast with phrases such as “The graves are not yet full,” transmitted via radio and newspaper.

Abstaining from detail in the problematic topic of humanitarian intervention in the case of Rwanda, Dr. Kaufman did touch upon possible responses from the international community which included the option to either damage or even completely destroy the radio stations. Arguments against such an action consisted in a general rejection of humanitarian intervention, as well as safeguarding freedom of speech.

The counterargument for this debate was the possibility of mitigation and the reasonable limits to free speech. This issue was compared to whether or not the Allies should have bombed the train tracks to Auschwitz during the Holocaust.

The decisive role that the media played in the context of the genocide led to the main trial of the prosecution being directed against media officials. Three defendants were given a life sentence in two cases, and 35 years in another case. The life sentences were later overturned and changed to 32 and 30 years respectively. This demonstrates the difficulty of legally proving accusations against the media. Still, it created a precedent for criminal law.

Dr. Kaufman furthermore mentioned the judicial prosecution of the genocide in general. The International Criminal Tribunal for Rwanda had been confronted with the exceptionally difficult problem of facing almost the same number of perpetrators as victims. This problem was dealt with by setting up local courts presided by village elders. These courts served as a possibility for the communities to participate in the process of seeking justice and reconciliation in the country. The cases excluded genocide or rape, and were mostly punished with community service and/or compensation. However, the question of what to do with the enormous amounts of court papers is still open. Dr. Kaufman supported the idea of using them for a memorial.

Even though many Rwandans would have preferred to forget, the International Tribunal had set its priorities: To research the background of the crimes and to prosecute the perpetrators. Denial could lead to recurrence as made evident by the fact that the massacre and expulsion of Tutsi in the late fifties and sixties had never really come to light. Memory and education would help Rwanda to recover – even partially – from its wounds.

Moreover, Dr. Kaufman talked about the concept of “Social entrepreneurship”. This concept had been coined by Bill Drayton, who founded an organisation called “Ashoka” in 1980 which supports social entrepreneurs. Ashoka was established on the conviction that “the most powerful force for change in the world is a new idea in the hands of a leading social entrepreneur.” These “Philantro-capitalists” would employ their business skills for social causes; “an innovative venture – whether for-profit, non-profit or a combination – which seeks to further a common goal.” Historically one could trace back social entrepreneurs to the early missionaries, which points to the broad concept of social entrepreneurship. A “renewal of the spirit” was clearly visible today.

A case study of social entrepreneurship in the context of the lecture topic was presented by Dr. Kaufman with the Kigali Public Library. The aim of this project is to provide free access to information and knowledge. The public library system is new in Rwanda and supposed to strengthen its democracy. Dr. Kaufman quoted Andrew Carnegie, who saw in the public library the “cradle of democracy”. Carnegie let the community partake in the construction of the library, by illustrating the development and answering questions on the procedure.

A lot of progress is already visible in Rwanda. This can be clearly seen in the increased literacy rate from 47 to 80 percent. The library has created a section dedicated to the history of Rwanda. Additionally, the strengthening of a common national identity through historical education is a tool in closing this gap that had been created Belgian colonial times, and led to the wide gap between Hutu and Tutsi.

Following the lecture, Dr. Kaufman answered numerous questions and further explained certain arguments. A special contribution was made by a Rwandan attendant, who explicitly thanked Dr. Kaufman for his efforts in her home country.

The topic of this lecture was also the subject of a conference organised by the KAS Israel and the Jerusalem Center for Public Affairs (JCPA) in November 2011 about changing forms of incitement to terrorism and violence (see here).

Of particular interest is the lecture given by Gregory S. Gordon on the topic of “Incitement in Rwanda: The Path to Genocide.”) 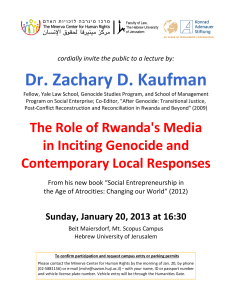