Countries and Campaigns: Populism and Elections

by Liza Katz
On 25 June 2019, the Konrad-Adenauer-Stiftung Israel and the Israel Democracy Institute held a conference on "Countries and Campaigns: Populism and Elections".
July 21, 2019 Ordering Information 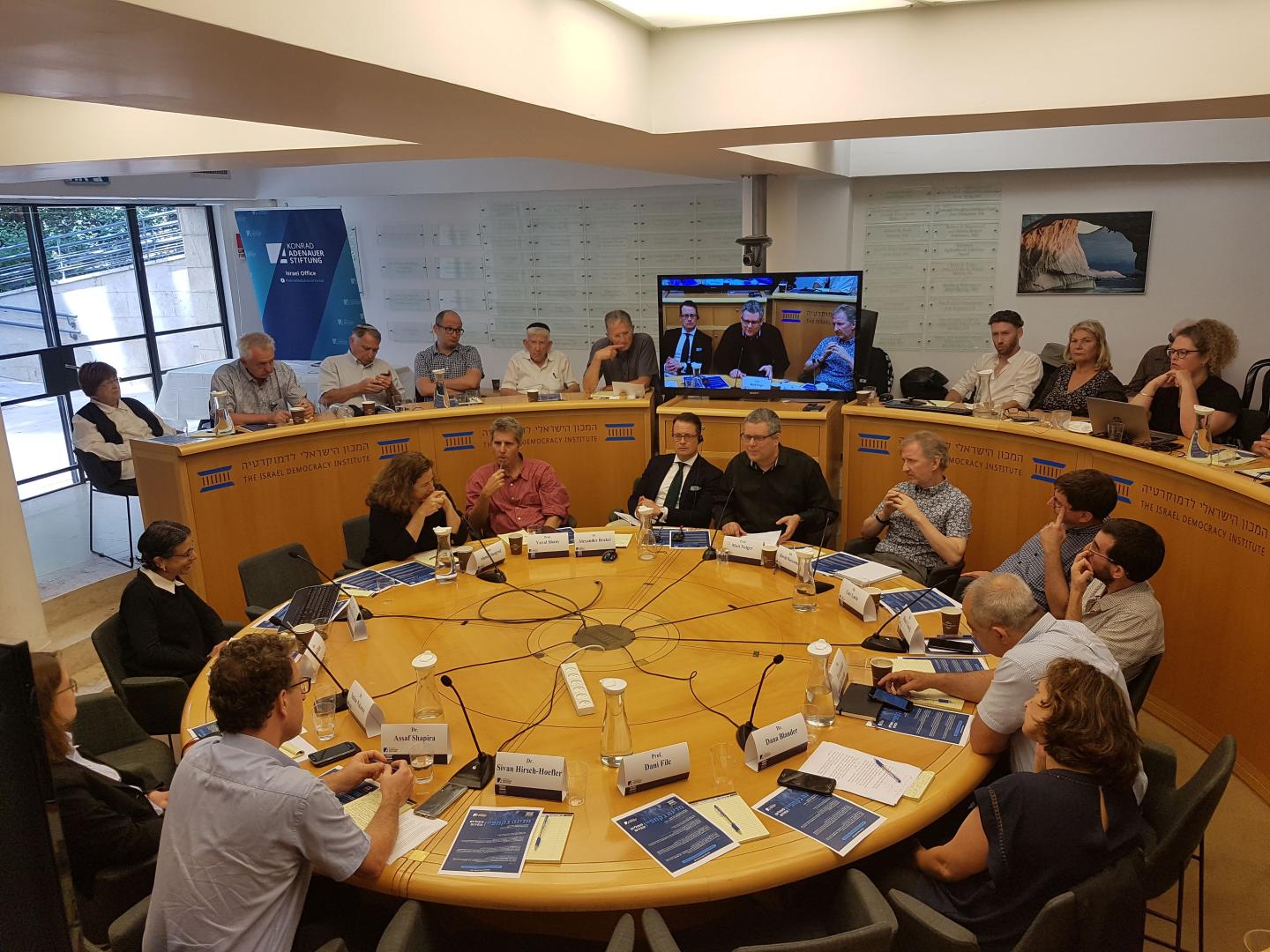 On 25 June 2019, the Konrad -Adenauer-Stiftung Israel and the Israel Democracy Institute (IDI) held a conference on "Countries and Campaigns: Populism and Elections".

Prof. Yuval Shany opened the conference and addressed the various definitions of populism in his welcoming speech; according to a common one, populism poses growing ideological challenges to liberal democracies worldwide. New policies need to be developed to counter these. Dr. Alexander Brakel, head of the Konrad Adenauer Foundation in Israel, also welcomed the approximately 50 guests. He explained that there are two types of populists: some deny being populists, while others are self-declared populists. Populism is characterized by a "we against all others" attitude, according to Dr. Brakel.

The phenomenon of populism and the mechanisms that promote its dissemination cannot be understood without examining the perspective of mass communication. The first panel was dedicated to the topic of populism and the role of the media during election campaigns. Dr. Sharon Haleva-Amir, lecturer at Bar Ilan University, opened the panel with an analysis of the Knesset election in April 2019. She talked about social bots – easy to program computer programs that can communicate automatically – which made topics and people appear more important than they actually were. These bots and fake profiles spread false reports, undermining confidence in political institutions according to Dr. Haleva-Amir. Shuki Tsaid, a journalist for “The Seventh Eye”, said that populism was as old as democracies themselves. The influence of the new media gave new impetus to this form of politics. Expressions of opinion were more visible and more open than ever before, which in principle should be welcomed.

David Horowitz, founder of “The Times of Israel”, pointed out that the change of and in the media landscape fostered the emergence of fake news and alternative facts. Politicians today could address potential voters directly via Facebook and Twitter for which Israel’s Prime Minister Benjamin Netanyahu serves as an example par excellence. In January 2015 he was said to have had 1.1 million followers on Facebook, in January 2019 2.4 million and one month prior to the election 6 million. In his remarks, Horowitz emphasized the co-responsibility of journalists and the media for the success of populist actors. Accordingly, they offered populist politicians a national stage to spread their messages and secured them a kind of "media legitimacy".
​​​​​​​In order to have a democratic dispute prior to parliamentary elections, the media should report in a more balanced way, lawyer Alona Vinograd of the IDI said. The people have the right to vote but also the right to facts. Editorial contents, fake news and propaganda could barely be separated during election campaigns. Thus, it was important to retain neutrality and to distinguish between opinions and facts.

On the second panel, Dr. Assaf Shapira and lawyer Ron Oded, both from the IDI, presented their not yet published test study of the Knesset election in April 2019. Both scientists examined populist statements of all political parties in social networks, especially on Facebook. They analyzed which parties show populist characteristics. Also, the topics “deep state” and xenophobia were addressed in this context. Prof. Shaul Shenhav of the Hebrew University, Dr. Sivan Hisch-Hoefler of the IDC Herzliya and Prof. Dani Flinc of the Ben Gurion University were invited as constructive “criticizers” to evaluate the test study. They found the choice of topic successful, but proposed, however, to analyze the content of the study within a longer period of time.

The last panel, moderated by Dr. Dana Blander, from IDI, was dedicated to voting behavior. Prof. Esteban Klor, Department of Economics at the Hebrew University, gave a talk about economic factors that could lead to the rise of populist parties. According to him, economic uncertainty, income and asset distribution, immigration as well as the loss of trust in established parties have a strong impact on voting behavior. Populists use economic contexts and embed them into their socio-political critique through which they win their electorate. France and Greece were mentioned as examples in this regard. In Germany, populism has become part of the political landscape as well, according to Dr. Sabine Pokorny of the Konrad-Adenauer-Stiftung Berlin. In 2017, the AfD (Alternative für Deutschland) moved into the Bundestag for the first time with a share of 12.6 percent of the vote. Dr. Pokorny explained that the socio-demographic characteristics of the AfD constituency were less relevant than their political views. They were often disappointed by other parties, experienced injustice, were ybder the impression that crime was on the rise and increasingly feared Islam.

Prof. Yuval Shani summarized the results of the discussions, which was followed by a question and answer session with the audience.