by Stanislav Linchevsky
The Centre for the Study of European Politics and Society at the Ben-Gurion University of the Negev along with KAS hosted the 5th Annual Conference for young researchers of European studies. The sessions covered a variety of topics such as German-Israeli relations, European Integration, Higher Education and other pressing issues.
July 6, 2016 Ordering Information

The conference was opened by Prof. Sharon Pardo, the Chair of the National Jean Monnet Centre of Excellence – the Centre for the Study of European Politics and Society (CSEPS), and Dr. Michael Borchard Head of the Konrad Adenauer Stiftung office in Israel. They both welcomed the participants and stressed the importance of supporting European studies in the Israeli academy.

Dr. Michael Borchard said that Europe has always been affecting the Middle East on the one hand, and on the other hand, as we can see today, everything that happened in the region had a major effect on Europe. Dr. Borchard also presented some of the results of a survey which was conducted in recent months in cooperation with CSEPS. The survey was aimed on exploring the opinion of the wide Israeli public on Europe and the EU in general and in regards to Israel. Dr. Borchard explained that the results of the survey showed that there is a great deal of misunderstanding among Israelis regarding the role and the cooperation between the EU and Israel in various fields such as science and technology. Dr. Borchard therefore emphasized how important it is for KAS to support these kind of conferences in order to enhance European studies so that in the long run, this would expose the Israeli public to the depth and the significance of the EU, and would create a better platform for Israeli-European relations in the future .

Prof. Sharon Pardo said that the goal of the conference is to bring together researchers from different fields and assess the current trends in EU studies in Israel. He added by noting that he hopes that in future conferences the CSEPS will be able to bring along also early career academics from Europe, thus increasing and improving the academic dialogue with young Israeli researchers.

The first panel of the day, which followed the opening speeches and was chaired by Dr. Borchard, explored the Israeli-German Relationship from a multidimensional perspective with the help of four interesting and unique papers. In each of the panels during the conference, each of the participants had 10-15 minutes to present his research and then the other participants and the chair had the chance to make comments and ask questions. Finally, after everyone has presented their research, there was a room for a more general inter-disciplinary discussion about the topic.

The first paper by Mr. Ido Rosenblum dealt with Israeli immigrants (Jews and Arabs) in Berlin and issues of Israeli and European identity through the prism of culinary culture. The research tried to identify how does food helps to build identity of the self and of the immigrants community; while on the other hand to re-negotiate relationships between people, and to build bridges to relations between the Israeli immigrant community to the hosting society, and with other immigrant communities (Such as Palestinian, Iranian, etc.).

The second paper by Mr. Doron Timor described how in middle of the 1960s the manner in which Israeli students perceived their public role changed significantly, and what part did the renewal of German-Israeli relations in the 1960's play in this change. The relations between Israel and West Germany were sharply criticized by the students and led them to protests of power and magnitude never seen before. These events led to the development of new patterns in both students’ perception of their public role in Israeli society and Israeli political arena.

The third paper by Mr. Omri Adoni aimed on expanding on the various reasons Israel has decided to form military relations with West Germany in the years 1957-1965. Until now these relations were mostly described in research as part of economic necessities and as a natural process of the growing relations between the countries which led to the forming of the formal relations in 1965. Thus, it was the diversity of products offered by Germany, its rising political power in NATO and Europe and the German military doctrine that was learned by Israeli officers, which made these relations possible.

Finally, the fourth paper by Ms. Judith Muller explored the Central European narratives of movement in the eyes of German-Jewish and Hebrew writers through the novels of Karl Emil Franzos and Aharon Appelfeld. In the context of these novels, this paper elaborated on the concept of the periphery and raised the question of - if and how this perception is still relevant for our understanding of Central Europe today.

Following the first panel, In her keynote speech entitled “Shifting Frontiers: Higher Education, the EU and the Cultural Political Economy of Regionalism”, Prof. Susan Robertson discussed the global regionalization trends in higher education, with a focus on Europe. Europe’s regional initiatives in higher education, and in particular the Bologna Process, can be understood as fulfilling an economic, political as well as cultural project. Prof. Robertson further elaborated that these initiatives could be conceptualized within the larger framework of the global political economy. Prof. Robertson emphasized the value of studying the higher education and research sectors for theorizing regions. The study of regional higher education and research trends can contribute immensely to the conceptual understanding of regionalism in a wider perspective. Prof. Robertson discussed the fact that researching this field within the wider framework of sectoral regionalism, could shed important light on the specificities of the higher education sphere.

Other panels throughout the day dealt with other interesting subjects such as "Higher Education in a Globalized World", "Politics and Policies in Contemporary Europe", "Normative Power Europe" and "Governing through Higher Education". The variety of topics was indeed very wide and touched upon political and social issues, starting from stability of the Ukrainian political system to the policy of abortions in Ireland. Another keynote speaker Prof. Ian McBride whose presentation, centered on eighteenth century Ireland and the role of historians in making sense of the Northern Ireland conflict. His talk focused on debates over truth and reconciliation in Northern Ireland since 1998 and the relationship between political violence, representations of the past, and professional historiography.

Finally, after a long day of fruitful discussions, exchange of ideas and academic debates, the participants got to enjoy a joint dinner with the participants of the annual 2016 Ben Gurion Univeristy Irish Symposium which was also held at the same day. 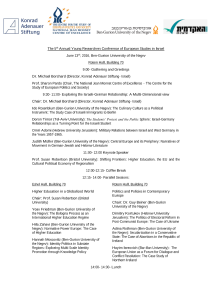 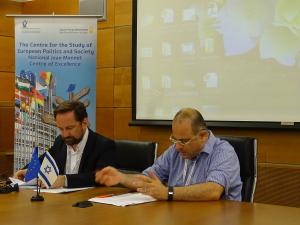 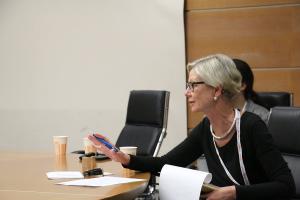 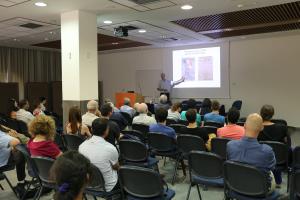 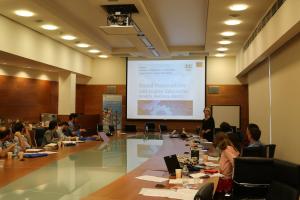 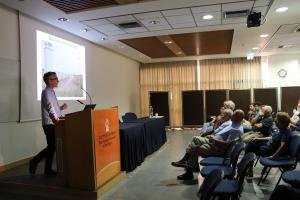 Prof. Ian McBride - The Historian as Healer? Truth and Reconciliation in Northern Ireland