Supporting the dialog between Jewish and Arab Israelis – with this goal in mind, the Konrad Adenauer Institute, in cooperation with the Moshe Dayan Center for Middle Eastern and African Studies at Tel Aviv University, created the “Konrad Adenauer Program for Jewish-Arab Cooperation” (KAP), exactly 20 years ago. The special anniversary was celebrated on March 23rd in Tel Aviv University, with a round of lectures and discussions. Notable participants were the Member of Knesset and former Minister Tzipi Livni and Prof. Eli Rekhess, one of the program’s founders.
March 23, 2016 Ordering Information 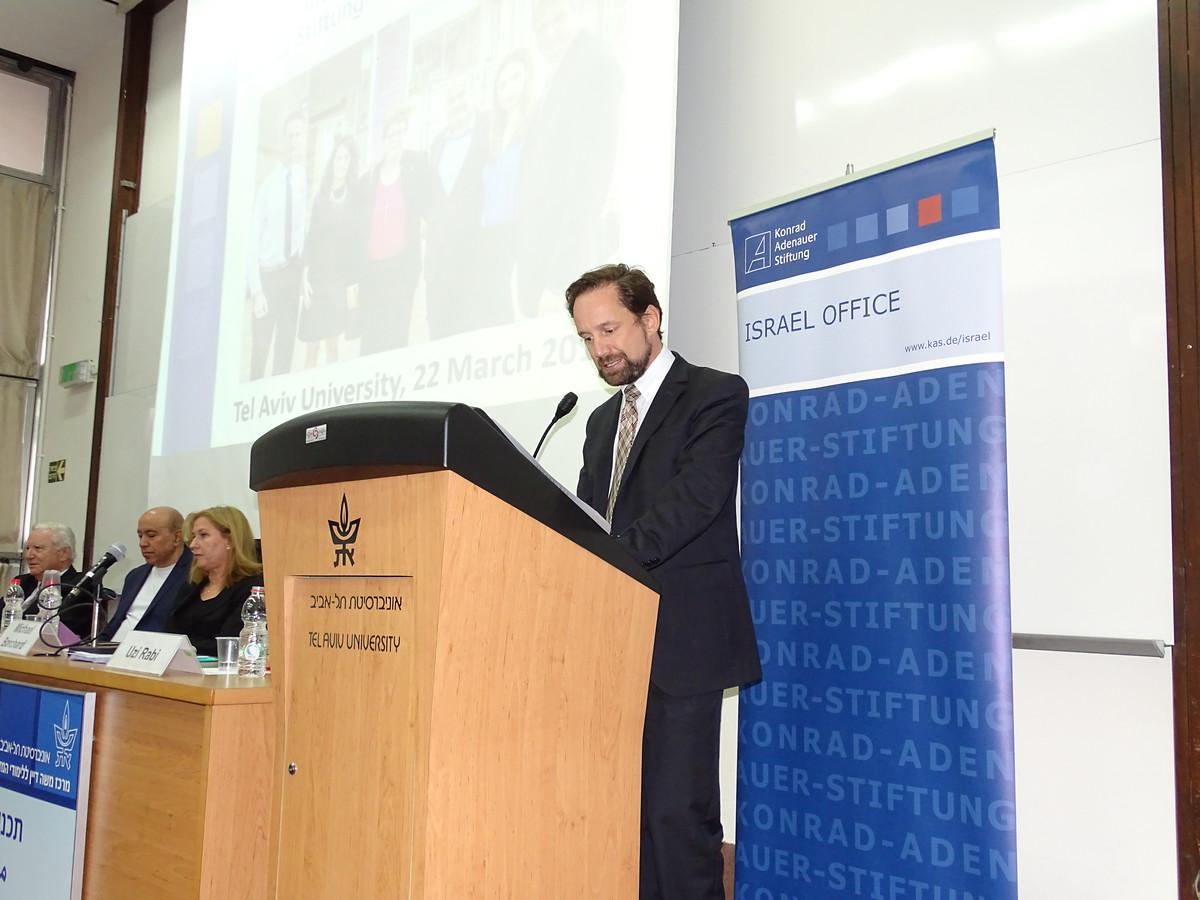 The event was opened by Prof. Uzi Rabi, Director of the Moshe Dayan Center. In his remarks, he commended the cooperation with the KAS and acknowledged the projects carried out by both institutes together in recent years, which have made a steady exchange between Jewish and Arab Israelis possible. The initial approach taken by the academically-focused program – establishing an open dialog channel between the various groups of the Israeli population and thereby generating public interest for creating a democratic and pluralistic society – has been rather impressively successful.

The first round of discussions began with a greeting by the Director of the KAS Office in Israel, Dr. Michael Borchard. He looked back proudly on the numerous successes of the program and the way it has developed, which have made it one of the Institute’s flagship projects in Israel. However, this happy anniversary also serves as an opportunity to critically question both the current political and societal situation as well as the position of the Arab minority in Israel. Despite many positive developments, a large socio-economic, civil and political divide continues to exist between Arab and Jewish Israelis. The image of the relations between these communities is one of mutual prejudice and misunderstanding, as well as simple ignorance. The idea behind the program is therefore more relevant than ever. In this context, Dr. Borchard commended and thanked first and foremost his predecessors, Dr. Michael Lange and Dr. Gerhard Wahlers, whose courage and vision allowed the program to achieve its current important meaning. In view of the current wave of terror in Israel, which is also currently posing an identity crisis for many Arab Israelis, the program’s orientation has certainly not lost any of its relevance and necessity. This is also shown by results of recent surveys, such as those published by the PEW Research Centers. The situation is, however, often presented as grimmer than it actually is, said Dr. Borchard. Some studies, such as the one published by the Israel Democratic Institute, make it clear that there are also some positive developments: many Jewish and Arab citizens share the same values and interests.

As one of the guests of honor, Member of Knesset and former Justice and Foreign Minister Tzipi Livni (Zionist Union) took the stage. She praised the KAP and particularly the work done by the KAS in Israel, which she has become familiar with through her participation in its events. To her, the work of such institutes – despite the recent steps taken by the Israeli government – is an important pillar of the democratic system and of a pluralistic society in her home country. Even if not written down constituently, Israel has very clearly relied on a Jewish and democratic set of values, and therefore belongs to the “modern free world”. For Israel, in times of terror and struggles against islamistic movements this set of values has become more critical than ever. Currently, during brutal terror attacks which pose such a shock to the Western communities, Israel must not abandon its democratic values. On the Jewish side, equal rights to all members of society is also important, and so, according to Livni, consideration towards minorities in Israel goes hand in hand with the country’s values. On the other hand, preventing radical elements from seizing control and creating a religious inflammation from the Israeli-Palestinian conflict is an extremely important goal. It is the responsibility of the people themselves to stop the spread of hate, racism and violence through the considerable power of social media. Only so, and with the creation of two states, can the spiral of violence in the Israeli-Palestinian conflict finally come to an end.

The second speaker was the journalist and Member of Knesset Zouheir Bahloul (Zionist Union). In his very emotional speech, Bahloul, an Arab from Haifa, described his own experiences of the marginalization of Arabs and the separation between Jewish and Arab Israelis. To him, the many attempts at creating a joint life for Jews and Arabs in Israel have been a colossal failure. “The ethnic groups don’t live with each other, but rather near each other”, said Bahloul. The Jewish community is completely paralyzed when it comes to the question of how to go around Arabs in their daily lives. The people need to understand that the Arabs will never give up their own identity, be it in the form of “Palestinian DNA”, to fully integrate themselves into the Jewish minority. If Jewish Israelis cannot accept this, there will be no possible solutions to reduce the tensions between the different parts of society.

Prof. Eli Rekhess, one of the founders of the KAP and a leading expert for the Israeli-Palestinian conflict, traveled all the way from the U.S. for the event. At the end of the first round of discussions, he was presented with an honorary certificate by Dr. Borchard for his unique engagement in the program. Looking back at the development of the program, Prof. Rekhess highlighted the motivation behind the founding of the program: (1) Supporting the academic research about the Arab minority in Israel, (2) Development of an Arab-Israeli database, (3) Creating a dialog platform, which will make an open and critical exchange possible, (4) Consolidating the political decision makers. Significant success in each of the four topics could be noted, however the program is still far from reaching its goal.

The second part of the event was devoted to the newest scientific findings about the Jewish-Arab relations in Israel. Dr. Nohad Ali from the University of Haifa presented the results of his yet to be published study about the meaning of Arabs in the Israeli scientific fields. The data, gathered from eight universities and two colleges in Israel make it very clear: Arabs are significantly underrepresented among both the students and the teaching staff; Arab Israelis often move to the West Bank or to Jordan for their studies. Dr. Ali left the question of whether establishing Arab universities in Israel could solve the problem open to interpretation.

Jewish-Arab Relations in Israel Tested by Time and Reality