Holy Sites in the Holy Land

A test of religious tolerance

On October 30, 2013, top religious leaders and senior officials involved in religious affairs from the Interior Ministry and the Ministry of Foreign Affairs attended the public presentaion of the “Universal Code of Conduct on Holy Sites” at a conference entitled “Safeguarding Holy Sites in the Holy Land”.
November 1, 2013 Ordering Information

The conference was actualized by Search for Common Ground in partnership with KAS Israel, NGOs that engage in interreligious dialogue on a global level. Interreligious dialogue is of particular relevance in the Holy Land as the region is the crossroad of religious worship of different faiths. Because of this, many locations are of particular relevance to not just one religion, but several.

Sharon Rosen, co-director of the Jerusalem office of Search for Common Ground opened the conference by stating its objectives. On behalf of the Ministry of Foreign Affairs, Ambassador Akiva Tor also participated in welcoming guests to the conference. Norwegian Ambassador Svein Sevje explained to the audience why the Norwegian government has supported the “Universal Code of Conduct on Holy Sites” and will continue to do so. Michael Mertes, director of KAS Israel, underlined the importance of interreligious dialogue for the KAS and encouraged the conference discussion to be made with concrete questions.

The first panel was led by senior religious leaders: David Lau, Chief Rabbi of Israel, Theophilus III, the Patriarch of the Greek Orthodox Church, Qadi (Judge) Dr. Hamza Hamza from the Taybeh Druze and Sharia Court, and Qadi (Judge) Sheikh Naim Henu of the Druze religious court in Israel. The discussion was moderated by Rabbi David Rosen, the International Director of Interreligious Affairs of the American Jewish Committee.

The topic addressed was “What makes a place Holy?”. It was agreed that in the monotheistic religions, what is “sacred” is, among other things, determined by its distinction from what is “profane”. Strictly speaking, one can attribute holiness to G-d alone; the “holiness” of a location or object is derived from it. Although the experience of a spiritual encounter may be triggered by an outward place, its true seat is in the soul of the believer. Against this backdrop, the term “sacred” may be applied to:

Such respect should also be conveyed to the children of all religious communities. Throughout the discussion, it became clear that all religious communities need to do more for the youth in their community to teach respect towards the beliefs of others. When religious authorities applaud vandalism of the holy sites of other religions and condone violence against other faiths, it is not only criminal from a secular point of view, but also a violation of the fundamental religious commandment to respect one another as G-d does.

The second panel was devoted to two case studies. One of those included the case of Mount Zion and the other the Great Mosque of Beersheba. Under the expert moderation of Professor Yitzhak Reiter from the Jerusalem Institute for Israel Studies, Panelists Fr. Pizzaballa OFM, Custos of the Holy Land, and Yisca Harani, an independent scholar and history of Christianity expert, analyzed the meaning of Mount Zion to Jews, Christians and Muslims. Jamal Al-Aberro, Supervisor of the Southern Diustrict with the Ministry of Interior and attorney and academic, Shada Ibn Bari debated about the deconsecration of the mosque in Beersheba.

The Mount Zion Case Study: Fr. Pizzaballa gave a historical overview of Mount Zion as the (presumed) site of the Last Supper (Coenaculum) and the Pentecost, and as the second holiest site in Christianity after the Church of the Holy Sepulcher. Through her research, scholar Yisca Harani came to the conclusion that the attribution of the tomb beneath the Coenaculum to King David was originally a medieval Christian theory which was later adopted by Jews. Both speakers discussed the centuries of Muslim presence on Mount Zion and came to the conclusion that the site is sacred to Muslims, Christians and Jews alike, albeit in different ways, and that mutually exclusive claims of ownership were pointless. From this discussion, the importance to find a modus vivendi which enables all faiths to worship in this holy place became clear.

Great Mosque of Beersheba: The mosque in Beersheva served as a house of worship until the 1948 War of Independence. The mosque does not have the debate of ownership claims between different religious communities but the question of its functionality in its now Jewish neighborhood. The Israeli Supreme Court ruled in June 2011 that the site must not be used as a secular museum, and that it should be used as a museum of Islamic art. The issue of restoring Muslim worship, however, has not been settled and the Jewish residents fear a disturbance of public order and an increase in violent clashes between Jews and Muslims if the mosque is used again for worship.

In the beginning of the third panel, moderator Ya’akov Salame, department head of the Minorities within the Interior Ministry, asked the question “What is Israel doing to protect the Holy Sites?” The following lecturers dealt with these issues as professionals in their field.

Avi Biton, Chief of Police in the Old City stressed that safety of the holy sites in the Old City is of top priority. A special emphasis is put on the protection of residents and tourists from attacks by fanatics. Yehuda Shaffer, the Deputy State Attorney at the Justice Ministry stressed that security at holy sites cannot be achieved solely on a legal level and must continue by targeting the issue socially.

Arad Nir, the international commentator and foreign editor for Channel 2 News made it clear that the Israeli media would report on the Holy Sites freely and independently. Nir expressed that he sees the responsibility of the media to present the facts but not necessarily for the protection of the sacred sites. Nava Firer, an Education Ministry representative, believes that it is the responsibility of educational institutions to promote inter-religious dialogue, both in class and through exchange programs. Naomi Tzur, until most recently deputy mayor of Jerusalem, encouraged openness and respect within inter-religious dialogue. She warned that one of Israel’s biggest dangers is the lack of respect for others.

Upon summarizing, Sharon Rosen stated that the decisions involving Holy Sites should be taken by all religious communities involved. By creating a “Universal Code”, religious leaders have already made a significant step towards this effort and in order to enforce this code worldwide, governments and institutions all over the world would also need to support this code. 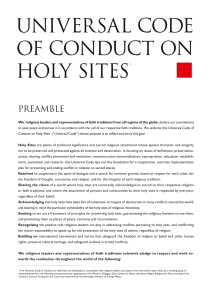