Naming the Sacred: Jerusalem and Religious Toponomastic in History, Theology and Politics

Together with the Elijah Interfaith Institute, FSCIRE - University of Bologna, the UNITWIN network for interreligious and intercultural studies and the Jerusalem gateway of Notre Dame University, KAS Israel hosted the conference “Naming the Sacred" on October 17 and 18, 2017.
November 30, 2017 Ordering Information

Together with The Elijah Interfaith Institute, FSCIRE - University of Bologna, the UNITWIN network for interreligious and intercultural studies and the Jerusalem gateway of Notre Dame University, KAS Israel hosted the conference “Naming the Sacred" on October 17 and 18, 2017. The conferences took place following ongoing discussions at UNESCO relating to Jerusalem and other holy sites in the Holy Land.

UNESCO discussions on Jerusalem are an important contemporary instance of the problematic meeting of religion, especially religion in a situation of conflict, politics and the attitude to such points of encounter by international political bodies. For this reason, KAS joined the initiative to hold a public conference in Jerusalem on the subject “Naming the Sacred”. The conference sought to study the history of how places have been renamed following changes of political power and to create a typology by means of which such activities can be better appreciated. This would also allow us to classify the actions and decisions of UNESCO from a broader comparative perspective, offering a critical lens by means of which both UNESCO and others can gain perspective on the recent UNESCO decisions.

Complementing the historical study during the open conference was a closed consultation on the same issue (October 15 and 16, 2017), from the perspective of history of religions. From this disciplinary perspective the question of sacred places was viewed in terms of how they relate to identity and, complementing that, how the spiritual and mystical dimensions of the religious life relate to identity and to sacred space. The consultation sought to uncover deeper dynamics that grow from within the religious life of different traditions that could contribute to situations of conflict around sacred spaces specifically, and more broadly to conflicts stemming from identitarian concerns. In the triangular relationship between holy places, identity and mysticism we uncover a formula that can either lead to hardening of boundaries and to conflict between religious communities or to their overcoming and transformation in peaceful ways.

There was a special particularity to this conference that distinguishes it from the typical conference. Because of the UNESCO context, the conference was attended by a significant group of UNESCO academic chair-holders. Up to 15 participants were scheduled to participate in this conference, all of whom belong to the UNITWIN networks, dedicated to interreligious and intercultural studies. UNESCO chairs were joined by a dozen other scholars of different specialties, who could enhance and provide substantive input to the conversations.

Naming the Sacred: Jerusalem and Religious Toponomastic in History, Theology and Politics 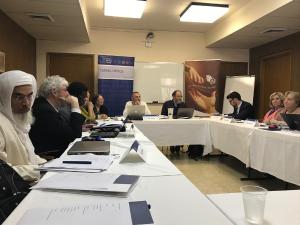 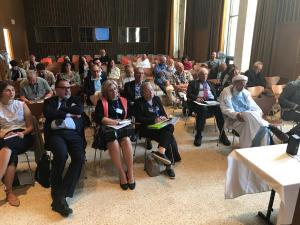 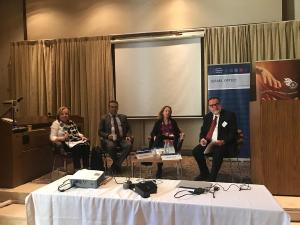 Session "Contemporary Perspectives and and the UNESCO Dispute" 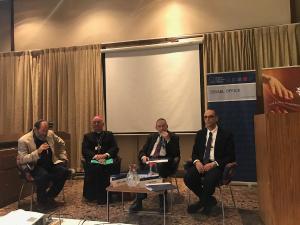