In a discussion titled “Strong Women in Israel – Women’s Role in Society and Integration of Religious and Ethnic Minorities”, the minister discussed the various challenges pertaining to Israeli integration policy and gender equality in the Israeli economic, social, political and scientific sectors.

The discussion began with an introduction to the topic by the director of the KAS office in Israel, Dr. Michael Borchard, who explained that Israel and Germany have much to learn from one another in the topics of integration and equality, and that both sides could greatly profit from an exchange of ideas. Minister Böhmer then explained that despite the important steps taken towards gender equality in recent years, true equality is still a distant goal, which, in the Minister’s opinion, can only be achieved through education.

The challenges facing Israeli women were presented by the other guests. Professors Rachel Erhard and Tamar Brosh from Tel Aviv University explained that there is still a large gap between male and female doctorate students and university deans. This notion was further strengthened by Sima Shine, director of International Affairs at the Israeli Ministry of Strategic Affairs and former director of the research department of the Mossad, the Israeli foreign secret service, who described how the highest ranks of the Mossad are almost exclusively occupied by men, despite Israeli women also being required to two years of military service. Brigadier General (ret.) Israela Oron expressed how, although many gender equality laws do exist, Israel is still severely lacking a serious implementation of those laws. The voice of the Ethiopian minority was represented by Mehereta Baruch-Ron, deputy mayor of Tel Aviv, who at age ten migrated from Ethiopia to Israel, and explained how, unlike the current migrants to Europe, her Jewish faith played a major part in her integration in the Jewish Israeli society. The perspective of the ultra-Orthodox community was expressed by Adina Bar-Shalom, daughter of Rabbi Ovadia Yosef, formerly one of the most influential personalities in Haredi society. She explained that Haredis currently make up 12% of Israeli society, but this figure is forecasted to double by 2030, which will make higher education extremely important for this ultra-conservative community. Bar-Shalom and her father are the founders of Haredi-College where over 11,000 students attend gender-separated studies in every field, which, according to her, is contributing to both the independence of Haredi women, and to the integration of Haredi men in Israeli society. 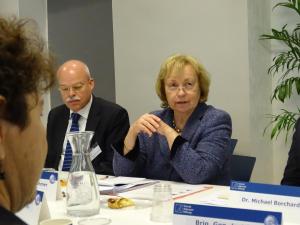