KAS Israel launched a series of workshops in cooperation with YPFP Tel-Aviv on the topic of Israeli-European relations. The participants included representatives from different European embassies, journalists, Academic researchers and representatives from various other Non-Governmental and Governmental organizations. The group heard from Mr. Shmuel (Sammy) Revel, Head of Europe Division in the Israeli Ministry of Foreign Affairs and discussed the “Shared Interests and Common Challenges”, and later engaged in a workshop that explored the necessary skills in today's changing global environment.
March 30, 2017 Ordering Information

After the participants shortly introduced themselves, Mr. Arik Segal, founder and ambassador of YPFP (Young Professionals in Foreign Policy) Tel-Aviv welcomed the participants and expressed his conviction that the event was a great opportunity to learn something about the European-Israeli relationship and to change something concerning the political situation.

Ms. Anna Jandrey, Deputy Director of The Konrad-Adenauer-Stiftung in Israel, also welcomed the participants and emphasized the importance of having young people discussing the relationship between the Europe and Israel. She elaborated on the historical significance of Konrad Adenauer and David Ben-Gurion for the establishment of relations and stressed that there currently was a lack of trust between the EU and Israel that needs to be overcomed by an honest cooperation based on the shared democratic values.

Mr. Shmuel (Sammy) Revel, Head of the Europe Division in the Israeli Ministry of Foreign Affairs, explained his point of view on the EU-Israeli relationship. He expressed his concern about the existing image problems on both sides. The image one has of the other severely affected the cooperation between two partners. Furthermore, Mr. Revel talked about the current challenges faced by the Middle East and Europe, such as the outcomes of the failed Arab Spring, the refugee crisis, the increased threat through terrorism and the rise of populist right-wing parties in Europe. Especially with regard to the challenge resulting from extreme gaps in population and income growth when comparing Europe to the Middle East, Israel and Europe were natural partners to handle the problem, explained Mr. Revel. Concerning the cooperation on sectors such as research, technology and economy, he showed that there were already many fruitful outcomes, for example the Horizon 2020 program. Nevertheless, there were barriers mainly resulting from the European perception of how Israel deals with the Palestinians. Mr. Revel also mentioned that he had often faced a very anti-Israeli stance in Europe. Overcoming those barriers was today’s challenge and should be confronted by involving the Israeli and European youth. Meeting each other was the secret to overcome obstacles according to Mr. Revel. He pointed out to the main areas where cooperation was needed: in security questions, innovation, energy and also in tourism. At the moment, so Mr. Revel, the most urgent area was security. After the participants raised some questions, issues such as the role of the media, antisemitism and the boycott of Israeli goods by European countries were discussed.

After a short break, participants were divided into groups and explored the necessary skills and tools for young professionals to impact foreign policy today. Mr. Arik Segal, who facilitated the workshop, opened the discussion by introducing the challenge of living in a new physical environment and dimension - "The 4th Industrial Revolution", which requires us to rethink everything we now about diplomacy as we knew it. The group went on and touched upon the issue of emotions and identity and tried to understand how it affects their work in regards to the Israeli-European relations. Finally, the group went through a series of short interactions, all aimed on exploring and bringing up ideas regarding missing skills that professionals today might have and that would be further discussed in the following meeting. 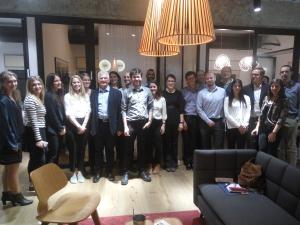 Group Photos with Mr. Shmuel (Sammy) Revel and the participants of the workshop 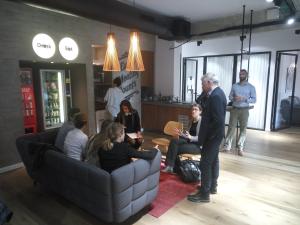 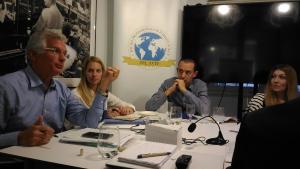 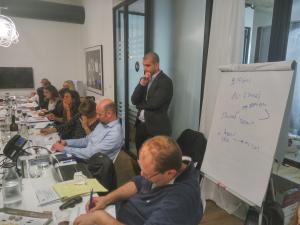