MEETING 3: FUTURE RELATIONS IN THE EYES OF YOUNG PROFESSIONALS

The project addressed issues relating the Israeli-European relations and the rising challenges in the international system in a series of discussions and workshops for a group of young Israeli and European foreign policy professionals.
July 24, 2017 Ordering Information

Dr. Joachim Rother, Deputy Head of the Konrad-Adenauer-Stiftung in Israel, opened the 3rd seminar welcoming the participants and explaining the foundation’s aspiration to foster the exchange of young professionals. He gave a brief overlook on the KAS’ work in Israel and emphasized the complexity of Israeli-European relations. Mr. Arik Segal, introduced the topic of the third meeting and then gave the word to group members who held short presentations on their personal and professional views about the relations.

Future Relations in the Eyes of Young Professionals

In the following discussion, the participants shared their views on the future Israeli-European relations. The following elements were pointed out:

Israel has valuable skills to contribute to the EU, as for instance in the scientific sector. Furthermore, Israel has an extraordinary position in the Middle East and therefore has a high range of mutual interests with the European Union, probably a fundament for a prosper relationship. Still, the high uncertainty of the Middle Eastern region and Israel's difficult environment has to be considered when taking a closer look at the Israel-EU relations.

The workshop closed with an outlook on the upcoming seminar which is set to take place in fall 2017 and which will add a more practical and skill-oriented component to this workshop-series. 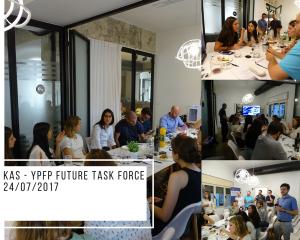