On Sunday, October 27, 2013, the Konrad-Adenauer-Stiftung, the Israel Democracy Institute (IDI) and the Bundeszentrale für politische Bildung brought together a group of over 20 German journalists to meet with Israeli media experts at the IDI premises in Jerusalem.
October 31, 2013 Ordering Information

After introductory remarks by Professor Mordechai Kremnitzer, Vice President of Research at the IDI, Michael Mertes, Director of the Konrad-Adenauer-Stiftung in Israel, and Mr. Thomas Krüger, President of the Federal Agency for Civic Education, Dr. Tehilla Shwartz Altshuler, Head of IDI’s Media Reform Project, provided an overview of the media landscape in Israel. Dr. Shwartz Altshuler also explained the role of the military and their influence on the media.

Lior Kodner, head of Haaretz digital media gave a synopsis of how Israelis consume the news and how Israeli news is evolving online. Tal Schneider, a popular political blogger in Israel, shared with the journalists her personal experience as a blogger and the slow evolution of bloggers being viewed as journalists within Israel.

Another presenter, Gidon Shaviv, Senior Research Analyst from Presspectiva, a media watchdog, spoke of the sensitivity of the Middle East and how stories easily reach the international media without any fact checking. He gave many examples of different scenarios in Israel, where falsely reported facts reached the international media. He explained how Presspectiva works tirelessly to change the ways news is released in the Middle East by encouraging the reporting of facts and not assumptions. Shaviv closed his presentation by explaining that there is an improvement in addressing incorrect reporting in recent years but there still is a general lack of methodology in correcting mistakes once they have reached the papers.

Hanoch Marmari, Editor in Chief of The Seventh Eye, an organization that aims to report without media bias, spoke of Israel’s mainstream media and the lack of journalistic risk taken in Israel. He elaborated to participants that investigative reporting in Israel is often limited to consumer products.

An open discussion followed the presentations. The German Journalists further inquired on the status of bloggers in Israel and on the relations of the Israeli Army and journalists in Israel. The Israeli speakers enlightened the participants on the role of the Army in journalism training; despite other presumptions, the army’s school of journalism promotes and trains for unbiased reporting. It was discussed how the military in Israel has great funding for their print and social media and because of this, civic media may not be able to compete on that level. Concerns were also discussed that civilian journalists may not have inside access in the IDF, thus withholding vital information from the public. Despite the potential limits of a country with such a strong military influence, a German investigative journalist pointed out how Israel can boast some more far-ranging rights than Germany, particularly in its libel law. He also pointed out that Israel has had a freedom of information law since 1999, while Germany only implemented its own law in 2006.

Dr. Shwartz Altshuler also explained to inquiring participants that security is not such an issue in reporting in Israel because there is a strict judicial review of administrative decisions; the Supreme Court allows freedom of the press unless there is a clear-cut threat. She mentioned that the main challenge to accessibility of information in Israel is not the issue of security but the internal discussions within the government because members of the executive branch are cautious with sharing their information.

Following the open discussion, the meeting broke into smaller groups which allowed speakers and participants to engage in informal discussions, furthering the dialogue between the Israeli and German participants. The German journalists expressed their appreciation for the insight they had gained into the Israeli media world. 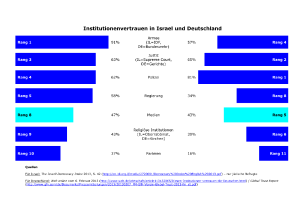 The media landscape and journalism in Israel and Germany