On 5 November, Hashim Thaçi, President of the Republic of Kosovo and former political leader of the UÇK (Kosovo Liberation Army), resigned from office as State President following confirmation of his indictment by the Kosovo Special Tribunal in the Hague. During a press conference, Thaçi explained that he would step down as President to safeguard the integrity of Kosovo and would present himself to the Hague. A few hours earlier, Kadri Veseli, Leader of the PDK (Democratic Party of Kosovo, third strongest party in the 2019 elections), former President of the Parliament and Chief of the Kosovo Secret Service during the war, declared that the indictment against him had also been confirmed in the Hague, and that he would voluntarily present himself to the Special Tribunal.
November 11, 2020 Ordering Information

As early as 4 November, following confirmation of the indictment, Jakup Krasniqi, former spokesperson of the Kosovo Liberation Army and former President of the Kosovar Parliament as well as one of the leading figures of the NISMA party, was arrested as part of a sensational action. That same day, Rexhep Selimi, Member of the Board of the Party Vetëvendosje (VV, strongest party during the 2019 elections) and Member of Parliament, announced that his indictment had been confirmed, too. All defendants confirmed that they would respect the Hague decisions and voluntarily surrender to the Kosovo Special Tribunal.

Hashim Thaçi und Kadri Veseli are accused of a whole array of deeds: crimes against humanity and war crimes including murder, forceful abduction, persecution, and torture, as already communicated by the Special Prosecutor in late June 2020.

From a legal perspective, the decisive factor will be whether proceedings succeed in proving that the accused are jointly responsible for acts committed by others.

Specifics of the Kosovo Special Tribunal

These institutions of law are of a temporary nature and only have limited jurisdiction, whose competence is specifically for crimes against humanity, war crimes and other crimes under Kosovo law, committed by or against the citizens of Kosovo or the Federal Republic of Yugoslavia  between 1 January 1998 and 31 December 2000. However, this Special Tribunal is not an international court, but instead belongs to Kosovo’s national court system. Hence, a unique feature here is that the institutions are headquartered in the Hague, Netherlands, and not in Kosovo. Above all, this is intended to protect witnesses. The judicial staff are also international, just like the judges (these include several Germans), the Special Prosecutor and the registrar.[1]

This court only deals with individual persons and cases of individual responsibility. People are held accountable for crimes that they committed as individuals, and not as representatives of a group, community, or ethnicity. It only concerns individual deeds. That does not, however, mean that the court can only hold one single offender accountable for a certain deed. This can also be someone who planned or instigated the deed. It could be a superior who failed to prevent a crime or did not subsequently punish the responsible party[2]

The report by the special rapporteur Dick Marty, which the Council of Europe adopted in early 2011, formed the basis for creating the Kosovo Special Tribunal in the Hague. Here, the Swiss ex-public prosecutor emphasises that crimes have been committed by the Serbian military and police in Kosovo, and these have already been well documented. In his report, Marty named several high Ex-UCK representatives in connection with the alleged crimes.[3]

The Kosovan authorities have come to an agreement with the EU on the terms for dealing with these serious charges. On 3 August 2015, the Kosovo Parliament adopted Article 162 of the Kosovo Constitution and the Law on the Chambers of the Special Tribunal and Special Prosecutor following correspondence between the President of Kosovo (at that time not Thaçi, but his predecessor in office, Atifete Jahjaga, who was proposed for office by the LDK), and the High Representative for Foreign Affairs and Security Policy of the European Union. The Special Court Chambers are allocated to each level of the court system in Kosovo - the Basic Court, the Court of Appeal, the Supreme Court of Justice, and the Constitutional Court. Hence, there is a Judicial Chamber of the first instance, a Chamber of Appeal, a Chamber of the Supreme Court of Justice, and a Chamber of the Constitutional Court. The chamber at the Basic Court consists of three judges and a reserve judge, while the chambers at the Court of Appeal, Supreme Court of Justice and Constitutional Court each have three judges.[4]

All chambers function according to the applicable laws of Kosovo as well as customary international law and international human rights standards. [5]

Current developments created uncertainty and tension in Kosovo’s political and public domain. The argumentation that “the court is one-sided and political”, and that “victims are unjustly equated with the offenders”, is unmistakable and widespread among political circles. At this point in time, it is difficult to predict the level of tension this situation will create in Kosovar society, as supporters and opponents of the KLA cannot be reconciled with one another. Particularly great are the challenges facing existing government coalitions. Thus, the AAK, which is the second largest party in the government coalition, called at an extraordinary meeting, among other things, for an end to negotiations with Serbia until the political situation in Kosovo, and particularly the election of a new President, has been clarified. What is remarkable is the great solidarity demonstrated in the social media to those accused, although large swathes of the population no longer follow them.

Electing a President of the Republic of Kosovo continues to pose a challenge because there is no agreement regarding this between the governing parties and seems scarcely achievable under the present circumstances. The AKK insists that the party leader Ramush Haradinaj should be elected president, whereas the LDK view this proposal with scepticism or in fact disapprove of it. Haradinaj himself had to appear before the International Criminal Court of Justice for the former Yugoslavia owing to an accusation of war crimes and crimes against humanity; however, a high-profile ruling acquitted him of all charges in 2012.

Yet, in order to elect a President in the first place, an agreement needs to be reached with one of the opposition parties (VV or PDK), so as to achieve the necessary quorum of 2/3 of votes in parliament. Here, an (albeit undesirable) agreement with the PDK seems easier to reach, but only with the consent of the AAK, which is opposed to the PDK. If there is no agreement between the governing coalition and one of the two opposition parties cited above, new elections can be expected, which, according to a general assessment, are likely to be won by the VV with its party leader Albin Kurti. As the only real opposition party, this party is in a favourable position because it is not considered to be part of the old political system.

The political situation in Kosovo is unstable once again, also against the background of election results in the USA, which traditionally have a major impact in Kosovo. Belgrade, too, would like a strong negotiating partner capable of making decisions to forge ahead with the EU-led Belgrade-Pristina dialogue. What is clear is that political developments in Kosovo have taken on a dangerous direction. 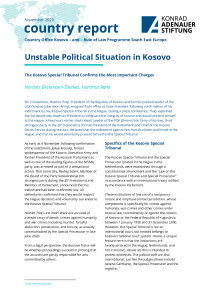 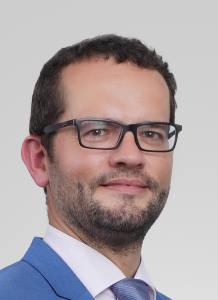 hartmut.rank@kas.de +40 21 302 02 63 +40 21 323 31 27
Country Reports
reuters/Hazir Reka
Change of Government in Kosovo:   Constitutional Court Paves the Way
According to the Constitutional Court ruling, a new government led by Avdullah Hoti of the LDK is expected to be formed swiftly
May 29, 2020
read more