The endorsement of a new draft law for Press and Publications was received with a lot of controversial reaction; the supporters of this law explained that it came to regulate the electronic news sites, while the opponents confirmed that it came to impose restrictions on the freedom of expression. In this framework, Scoopat and KAS Amman organized a symposium to discuss the positive and negative aspects of the new draft law.
March 14, 2013 Ordering Information

Department of Press and Publication

Ministry of Industry and Trade

How and why to organize websites?

Press and Publication Law – Between Acceptance and Rejection

Communication technology has evolved tremendously as a result of technical development and the spread of information very quickly. At the same time, the nature of news media and news presentation has changed dramatically over the last decades especially the electronic news sites which have become as a new trend in the news that play an essential role in our political, social and economical life. Because of what is mentioned above, Jordanian government considered amending the Press and Publications law of 1998 and incorporate some clauses dealing with electronic media as well as meeting the reform process taking place these days.

Within this regard, came this workshop to discuss the advantages and disadvantages of this law which was endorsed by the Lower and Upper houses of Parliament in September 2012 and which met a lot of controversial debates among the media circle as well as in the Jordanian street.

Mr. Maher Madieh, Director of First Media Company, declared that this meeting would focus on opening a dialogue to talk about the current problem which stirs the media circle and which is related to the endorsement of a new draft law that raised some controversial discussion that led to nothing except a sharp division among Jordanian citizens and international criticism towards Jordan.

The workshop was opened by Ms. Nidaa all Shraideh, on behalf of Dr. Otmar Oehring, the Residend Representative of Konrad Adenauer Stiftung. Having welcomed the participants and the partner Scoopat, Ms. Al Shraideh stressed the importance of this workshop which came to discuss the new law for press and publication and come out with recommendations compromising between the supporters and opponents’ points of view.

As a representative of the government, Mr. Fayez al Shawabkeh, Director of the Department of Press and Publications, said that the new draft law of Press and Publications came due to the need to regulate the work of the online media and compel those covering internal and external affairs in the Kingdom to register and obtain a license in accordance with the Press and Publications Law just like any other print media institution. And in order to ensure professionalism, the new amendments stipulate that the chief editors of news websites must be members of Jordan Press Association (JPA) and they will be responsible for online media outlets’ or for whatever comments their readers might post under published articles, because many intruders to the profession damaged the image of the credible, unbiased and professional media. He stated that a lot of electronic sites which had no identification and their owners are not known, had encroached upon professional standards, adopted a policy of criminalizing and defamation including libel and slander of personalities and they often accuse others without clear evidence and without any proof. Therefore, the amendments came to enable those harmed by what the media publish to obtain redress through judicial proceedings instead of taking the journalist into custody.

Al Shawabkeh also denied the rumors that said under this law, many websites will be closed, but on the contrary, he declared that the Department of Publications works on facilitating getting licenses and registration. He stressed the fact that no media institution is to be shut down or its registration abolished without a judicial order. Only certain websites that violate the law will be blocked explaining that only local news websites fall under the draft amendments and the government will not deal with websites designated for private or public sector institutions, Internet service providers or foreign news outlets.

H.E. Abdullah Abu Rumman, former Minister of Information presented a brief overview of the emergence, beginnings and evolution of the electronic press in Jordan as well as the reasons for its proliferation. He said that most of the comments on the subjects published within the electronic sites came to breathe out the dissatisfaction, anger and social tension, the people are facing daily. These comments started fostering a new media culture, and at the beginning it was characterized by sharpness, the use of nicknames and the raise of taboo issues to a level of public debate. He stated that that electronic press represents the new world which should be accepted without any restrictions.

Abu Rumman continued by saying that within these given circumstances, we witnessed the emergence of 3 reactions: the first disapproved this kind of press and demanded the protection of society from the defamation and assassination of personalities, with focusing strongly on introducing controls and penalties upon the electronic violators. The second strongly opposed any attempt to impose any restrictions on the performance of all media outlets, including the online media, which represents the future of the sector. The third was moderate and admitted that dealing with electronic media was not the same as dealing with printed press and it tried to compromise between the supporters of modern electronic media and its opponents.

Abu Rumman considered that compulsory licensing is unfair, illogical and unacceptable in light of the tremendous development in the virtual world and electronic media; while the optional registration is the most appropriate solution which he worked on when he was the minister of information during the Government of Marouf Al-Bakhit, Which succeeded after a long and hard battle, to persuade the House of Representatives and the Senates to simply approve an optional registration of websites, and Abu Rumman thinks that the publishers of the websites themselves have lost a historic opportunity in not accepting the registration of the sites at the time.

In the era of the Government of Khasawneh, the calls returned again, claiming the necessity to find a law regulating the work of the electronic sites and started working on a draft law on press and publications and, at the end, the conservative voices were able to impose its domination on this law, which was completed in the era of the Government of Fayez Tarawneh, passed by both Houses of Representatives and became under implementation.

Abu Rumman said that Stakeholders in the media and ICT sectors have missed the opportunity to benefit from the amendments of 2011, by not sticking to them as a compromise formula, and thus gave the other party the chance to retreat and consequently come out with such strictness in the new law.

Abu Rumman blamed the two late governments for being responsible for the decline in terms of legislative guarantees of electronic media work, and to a parallel extent, he blamed the media expressions that disrupted compatibility and let media returned back to square one.

Mr. Basel al Akoor, Editor in Chief of jo24 net, confirmed the rejection of the websites publishers of this law by declaring their rebellion against any kind of pressure, because the law came without adequate consultation with the JPA.

Okour considered that the main objective of the amended draft law is to impose restrictions on the electronic media and subjected it to government control after succeeding over the past years in getting independence and working as a supervisory authority representing the ears and eyes of the people. He said that there is no need for this law, especially in light of the existence of social networking sites that are not under the Jordanian authority. Through these sites, information could be easily transferred, and thus could put the state in direct confrontation with the International electronic media.

He also criticized the provisions of the law that violate confidentiality of information and try to disclose the private sources of the journalist, a thing that is rejected and not implemented in all countries that enjoy freedom of press. in addition, the new amendments to the Press and Publications Law contradict Constitutional Article No. 7, which guarantees protection of personal freedoms, and that any violation of the rights or public freedoms or private live of Jordanians is a crime punishable by law.

Okour expressed his surprise at the legal provision which allows blocking websites at the time of open space and social networking sites, and wondered whether the government would block thousands of Facebook and Twitter pages and prosecute their owners before the courts because it disapproves their opinions???. He again expressed his wonder at the fact that the amendments give the Department of Press and Publications, despite being administrative and not judicial, the right to sentencing and blocking many of the sites on the Internet.

He cited what Joel Simon, the executive director of the Committee to Protect Journalists in the United Nations said: “If these amendments passed they would engulf a big step back and perhaps add Jordan to the list of authoritarian States which impose censorship on the Internet”, He also cited the last comment no. 34 of the UN Human Rights Commission which says: ((the demand of licensing or registration of electronic media contradicts the change no. 19 of the International Covenant on Civil and political rights)

Akour concluded by confirming that In light of this law, publishers of online news websites announced their rejection of the law and vowed to instigate “electronic disobedience” by refusing to abide by its stipulations. Journalists renewed their calls to the Jordanian regime to reconsider the law and reach a compromise draft that guarantees, for both sides, an organized and regulated electronic media sector that is in accordance with international media conventions and regulations. 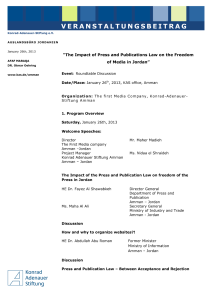 Media Policy, Freedom of the Press and of Expression