by Dr. Otmar Oehring, Muna Sukhni, Daniella Engelhardt
Jordan has recently witnessed a growing number of violent conflicts among its youth. To prevent a spiral of violence, trigger and causes of the increasing phenomena of violence must be identified. Therefore, KAS Jordan Office organized in cooperation with Scoopat the seminar “Violence at Jordanian Universities: Reasons and Solutions” on the 12th of June 2014 in Karak to develop strategies and measures to prevent a further progress of violence.
June 23, 2014 Ordering Information

On behalf of Dr. Otmar Oehring, Resident Representative of Konrad-Adenauer-Stiftung,

Session 1: Social and Cultural Roots of Violence Among University Students

Session 4: The Role of Legislation and Law in Reducing University Violence

Jordan has recently witnessed a growing number of violent conflicts among its youth, a phenomenon occurring particularly in Jordans’ universities. These acts of violence manifest in different ways, ranging from vandalism to verbal abuse and physical assault. To prevent a spiral of violence, trigger and causes of the increasing phenomena of violence must be identified. Therefore, KAS Jordan Office in cooperation with Scoopat decided to organize three seminars, entitled “Violence at Jordanian Universities: Reasons and Solutions” to develop strategies and measures to prevent a further progress of violence. These seminars aim at reducing the use of violence by raising awareness of its inability to adequately solve problems by helping to cope with the general pressure all students face. The seminars provide alternative ways of stress release and work on recommendations for a long-term plan to fight this unpleasant phenomenon which proves to be among the most dangerous problems academics are facing in Jordanian universities. The first workshop took place on the 28th of May in Zarqa and was followed by the second workshop on the 12th of June 2014 in Karak. One more workshop will take place on the 19th of June 2014 in Mafraq.

Mr. Maher Madieh, Director of Scoopat, emphasized that the seminars take up the function as dialogue forums to discuss the recent increase of societal violence in Jordan, in order to develop means of reducing this current phenomena. Especially the influence of the media has to be discussed in this regard, to raise a growing awareness among the Jordanian society. Mr. Madieh stated that it is the duty of the press to focus on this phenomenon with the discussion of its roots and possible solution approaches, in order to protect the social cohesion and livelihoods in Jordan. In this context, he thanked the participants, as well as KAS Jordan Office, for its continuous support of their work.

Ms. Nidaa Al Shraideh, project manager at KAS Jordan Office thanked all participants for their contributions and thus advancing the topic. Ms. Al Shraideh stressed the relevance of the seminars as violence in Jordanian universities has experienced a serious turn in the recent time, with reaching a new level of intensity through the use of guns and weapons. She further emphasized that the increasing violence has to be addressed since universities train and educate the future generations and therefore serve as a role model in the Jordanian society. In this context, she highlighted the importance of the successful cooperation with Scoopat in this crucial topic.

Mr. Niaz Al Majali, Al Karak Coordinator of the All Jordan Youth Comission, stated that the spread of acts of violence at Jordanian universities affected the reputation of these universities negatively. He explained that the phenomenon of violence takes different forms such as physical violence, verbal violence as well as assaults on public and private property and has in its various forms become a widespread problem at public as well as private universities. Mr. Al Majali emphasized that the violent behaviour taking place at Jordanian universities implies a threat for civil peace and security. For this reason he highlighted the importance of the partnership of the Jordan Youth Commission with the KAS office in Amman and Scoopat and expressed his hopes that the recommendations, that are to be developed in this the seminar, will contribute to the reduction of violence at universities in Jordan.

Session 1: Social and Cultural Roots of Violence Among University Students

Dr. Hussein Mahadeen, Associate Professor of Sociology at Mutah University, talked about the social and cultural roots of violence among university students in the first session. Thus, he stated the basic concepts of types of violence and the meanings that lie behind them. Dr. Mahadeen further explained the role of the geographical and social environment as well as the role of upbringing institutions like family, school or university in promoting and reducing violent behaviour. He identified violence at universities as one threat for security and stability in the Jordanian society.

Dr. Suleiman Al Sarayrih, Dean of Student Affairs Department at the Mutah University in Karak, talked about the role of Student Affairs in confronting the phenomenon of student violence. He stressed the importance of suitable leisure activities and volunteer work for young people in general and in particular for university students in order to release creative energy and to support the development of the student's personality. Trough this, students are prepared to become an active member in society. Out of his experiences as the Dean of Student Affairs Department at the Mutah University in Karak, Dr. Al Sarayrih highlighted the Student Affairs Department’s duty not only to assist the students with formal academic affairs but also to support them with finding appropriate activities and programs for their free time that are adequate to their interest. In this context, he identified the need to create effective programs to make the students understand the importance and the benefits of extracurricular activities and in particular volunteer work and to arouse their interest in participating. Based on his positive experiences with the student union at Mutah University, Dr. Al Sarayrih stressed the importance of implementing student representation councils as regular institution at universities. In this regard he pointed out the Student Affairs Department’s task to convince the university administration of the acceptance of student unions and to motivate students in their formation.

Mr. Suliman Al Kawaldeh, Director of Mossawah Center for Civil Society Development, talked about the relations between civil society organizations and higher education institutions in reducing university violence. He said that civil society institutions are key partners in solving many problems of the Jordanian society, especially in terms of “social responsibility”. Different segments of the local communities have to be further involved to address the phenomenon of student violence through educational work which will support the diminishment of violence. To achieve a cooperative partnership between the institutions of the civil society and the institutions of higher education, universities have to be more open to the work of civil society organizations and take their important contributions into account, thus accepting them as essential partners in reducing university violence.

Session 4: The Role of Legislation and Law in Reducing University Violence

Dr. Saif Al Masarweh, Assistant Dean of Student Affairs Department at the Mutah University in Karak, said that each university has its own regulations, laws and legislation when it comes to disciplinary procedures related to students who act against the university’s system. However these sanctions are being abolished or reduced due to the fact that family clans put high pressure on university’s administration. Therefore he emphasizes the importance of implementing sanctions on any student acting against the university’s system without getting influenced by any external pressure. The universities should also obligate new students upon entering the university to sign an agreement of registration cancellation in case the student participates in any violent action inside the university.

The most prominent recommendations that emerged from the seminar are the following:

•Volunteer work and teamwork among university students should be encouraged.

•Provide opportunities for university students to participate in extracurricular activities that are commensurate with their interest and abilities.

•Students should be supported in developing their personality and their talents, e.g. by the establishment of a number of courses in various fields.

•Educate students on the consequences of violence and rioting within the universities by holding seminars and workshops.

•Arrange work meetings between representatives of the various security agencies and students to talk about the importance of maintaining security inside and outside of university as well as personal responsibility in this matter.

•Arrange seminars and workshops that aim to discuss the challenges students have to face as well as to develop appropriate solutions.

•Educate young people about the need to respect other opinions, to resort to reasonable and logic based dialogue and to avoid partisanship.

•Apply regulations and law in cases of violent behaviour in universities without exception or favouritism.

•Spread the values of love, tolerance, generosity and equality.

•Focus on seminars, workshops and conferences for community groups and student associations to discuss the problem of violence at universities, to point out causes and to develop solutions. It is of particular interest how parents contribute to the behaviour of their child.

•Consider military training for a limited period of time like one month for all university students.

•Encourage students to participate in decision-making at all levels, as for instance in the parents' house, the school and university. 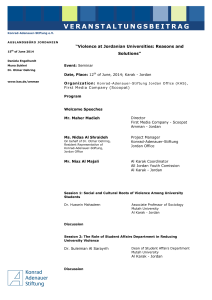