Jordan has recently witnessed a growing number of violent conflicts among its youth. To prevent a spiral of violence, trigger and causes of the increasing phenomena of violence must be identified. Therefore, KAS Jordan Office organized in cooperation with Scoopat and the Hashemite University the seminar “Violence at Jordanian Universities: Reasons and Solutions” on the 28th of May 2014 in Zarqa to develop strategies and measures to prevent a further progress of violence.
June 26, 2014 Ordering Information

On behalf of Dr. Otmar Oehring,

Session 1: The Role of Legislation and Law in Reducing University Violence

Session 2: The Role of Student Affairs in Reducing University Violence

Jordan has recently witnessed a growing number of violent conflicts among its youth, a phenomenon occurring particularly in Jordans’ universities. These acts of violence manifest in different ways, ranging from vandalism to verbal abuse and physical assault. To prevent a spiral of violence, trigger and causes of the increasing phenomena of violence must be identified. Therefore, KAS Jordan Office in cooperation with Scoopat decided to organize three seminars, entitled “Violence at Jordanian Universities: Reasons and Solutions” to develop strategies and measures to prevent a further progress of violence. These seminars aim at reducing the use of violence by raising awareness of its inability to adequately solve problems by helping to cope with the general pressure all students face. The seminars provide alternative ways of stress release and work on recommendations for a long-term plan to fight this unpleasant phenomenon which proves to be among the most dangerous problems academics are facing in Jordanian universities. The first seminar was held on 28th of May 2014 in Zarqa in cooperation with the Hashemite University. Two more seminars will be held in June 2014 in Mafraq and Karak.

Ms. Nidaa Al Shraideh, project manager at KAS Jordan Office thanked all participants for their contributions and thus advancing the topic. Ms. Al Shraideh stressed the relevance of the seminars as violence in Jordanian universities has experienced a serious turn in the recent time, with reaching a new level of intensity through the use of guns and weapons. She further emphasized that the increasing violence has to be addressed since universities train and educate the future generations and therefore serve as a role model in the Jordanian society. In this context, she highlighted the importance of the successful cooperation with Scoopat in this crucial topic.

Mr. Maher Madieh, Director of Scoopat, emphasized that the seminars take up the function as dialogue forums to discuss the recent increase of societal violence in Jordan, in order to develop means of reducing this current phenomena. Especially the influence of the media has to be discussed in this regard, to raise a growing awareness among the Jordanian society. Mr. Madieh stated that it is the duty of the press to focus on this phenomenon with the discussion of its roots and possible solution approaches, in order to protect the social cohesion and livelihoods in Jordan. In this context, he thanked the participants, as well as KAS Jordan Office, for its continuous support of their work.

Dr. Kamal Al-Dien Bani Hani, President of the Hashemite University in Zarqa, stated that despite the university education is an indicator of the development of a society, education in Jordan faces a loss of values in the recent time, represented in the growing violence at universities. This stems from a broader cultural loss of values which can be observed in the Jordanian society. However, the Hashemite University is one of the universities with less violence in comparison to other Jordanian universities. He further stressed the crucial role of the media in addressing the increasing violence through raising awareness among the Jordanian society, besides the important role of Civil Society institutions.

Session 1: The Role of Legislation and Law in Reducing University Violence

HE. Dr. Bassam Al Butush, Member of the Jordanian Parliament, talked about the role of legislation and law in reducing university violence. University violence has become a widespread phenomenon in both public and private Jordanian universities. The recent increase of violence, which seems to exist due to social reasons when looking at the clan society in Jordan, will on the long run threaten the social peace and security and affect social cohesion of the Jordanian society. Dr. Bassam Al Butush stressed that the existing legislation is adequate and efficient to face the university violence but it has to be applied and further enforced to ensure its just implementation. Students should fill their time with useful and beneficial activities, such as research or scientific projects, and get engaged in activities organized by the university. University regulations and laws, such as sanctions to students who violated at the university campus, have to be applied as deterrent measures. He further called for the establishment of psychological counselling centres at the universities.

Session 2: The Role of Student Affairs in Reducing University Violence

Dr. Yousif Elimat, Dean of Student Affairs at the Hashemite University in Zarqa, talked about the role of Student Affairs in confronting the phenomenon of student violence. Student Affairs should foster scientific, cultural and social activities and events to support the development of the students’ personality and to refine their behavior. It should aim to create youth leaders in order to release the creative energies of the students. This is important for maintaining security and stability and to promote growth and prosperity. He stressed the need to encourage students in the formation of student unions and to allow them to elect members of their colleagues in the student councils. Students should be motivated to express their views and concerns and to be part of the decision making when it comes to solving their problems. He expressed that universities should collaborate with national institutions that provide employment and training services for students such as the King Abdullah II Center for Excellence. This gives students the opportunity to develop their capabilities and at the same time it helps to reduce violence.

Mr. Suliman Al Kawaldeh, Director of Mossawah Center for Civil Society Development, talked about the relations between civil society organizations and higher education institutions in reducing university violence. He stressed that civil society institutions are key partners in solving many problems of the Jordanian society, especially in terms of “social responsibility”. Different segments of the local communities have to be further involved to address the phenomenon of student violence through educational work which will support the diminishment of violence. To achieve a cooperative partnership between the institutions of the civil society and the institutions of higher education, universities have to be more open to the work of civil society organizations and take their important contributions into account, thus accepting them as essential partners in reducing university violence.

At the end of the seminars an extensive discussion followed between students and participants about causes and solutions of university violence, about roles and duties of the various parties of students and teachers, official bodies and civil society organizations regarding handling the problem.

The first seminar has been a success in outlining reasons of the violent conflicts among young Jordanians as well as possible approaches for solving this problem. Two more seminars will follow in June 2014, which will be held in Mafraq and Karak. The results and recommendations that will be developed in these seminars will be outlined in two following reports. 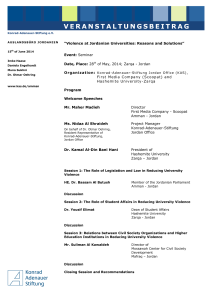