20 Years End of the GDR Regime

Vice President for the Faculties of Human Sciences

College of Arts and Design

Presentation: Economic Preconditions of the German Reunification: On the Success of the Social Market Economy

Vernissage of the Photo Exhibition: „GDR - Impressions of a Disappeared Republic“ by Dietmar Riemann

By celebrating the 20. anniversary of German reunification, the Federal Republic of Germany not only commemorates its unity after 45 years of division but also the restoration of its sovereignty which came along with the tremendous events in 1989/1990. Even more: The collapse of the GDR defeated a socio-political system that was characterized by a disregard of civil rights and liberties as well as the widespread use of political repression. On a socio-economic level the system of state-directed economy in Germany is nothing more than a part of history since October 3rd, 1990.

The event “20 Years German reunification, 20 Years End of GDR Regime”, which was organized in cooperation with the Goethe- Institute in Jordan, the University of Jordan and KAS Amman, aimed at giving an interested audience of embassy representatives, public figures, NGOs, professors and students a better understanding of this major event in German history. Under the patronage of the German ambassador to Jordan, Dr. Joachim Heidorn, the opening ceremony pointed light on different aspects of German reunification. While Prof. Dr. Peter Uecker focused his presentation on the economic consequences of state-directed economy in the GDR in comparison to the system of social market economy in the Federal Republic, the photo exhibition “GDR – Impressions of a Disappeared Republic” by the German artist Dietmar Riemann gave an insight into the daily life of the last years of the GDR. The screening of the GDR-movies “Wer die Erde liebt” on October 6th and “Die Beunruhigung” on October 7th as well as the concert of the rapper “Doppel-U” completed the cultural program organized by the Goethe-Institute.

Prof. Dr. Yusuf Qutami, Vice President of the Faculties of Human Sciences at the University of Jordan, used his opening speech of the event to underline the hospitality Jordan and the University of Jordan are showing to their guests. The respect for cultural diversity is of utmost importance for the mutual understanding between people and cultures and is best promoted through events of this sort.

Dr. Christiane Krämer-Hus-Hus, Director of the Goethe-Institute in Jordan, reminded the participants of all the constraints and deprivations for the population on both sides of the wall, which were adherent to the division of Germany. For her as a women from West-Germany, a city like Los Angeles had been much easier to access than any city in the eastern part of the divided country, as for example Dresden, Magdeburg or Leipzig. In the context of the 20th anniversary of German reunification, the contributions of Goethe Institute aimed at offering access to German history by showing art, movies and concerts connected to this topic.

In his opening speech, Dr. Martin Beck, Resident Representative of KAS Amman, pointed to the achievement for the eastern and the western part that came with the German reunification. 20 years ago, Germany had not only won its national unity; rather, further reason for celebration is the conquest of the rule of law and freedom for all Germans. Through the legal accession of the GDR to the Federal Republic of Germany on October 3rd, 1990, a regime was finally overthrown that largely lacked the rule of law and freedom.

Dr. Martin Beck expressed his appreciation to the key-note speaker of this event, Professor Dr. Peter Uecker, outgoing Vice President of the German-Jordanian University, for his invaluable work in Jordan and his partnership with KAS Amman. He highly esteemed that Prof. Dr. Peter Uecker chose the framework of a joint event of Goethe-Institute and KAS Amman to hold his last official speech in Amman.

Dr. Joachim Heidorn, ambassador of the Federal Republic of Germany to Jordan and patron of the event, emphatically referred to the German reunification as an occurrence of paramount importance for the country. The fall of the Berlin Wall was a tremendous, an unbelievable event. He himself came from Hannover, which was located not more than 80 kilometres from the inner-German border. The dictatorial system in the GDR was torn down by a spontaneous mass movement of the people, which was not expected in any way within the political elite on both sides of the border. Besides the challenge of lacking plans for organizing reunification, Dr. Joachim Heidorn reminded the participants of the concerns Germany´s neighbouring states held with regard to German reunification. First and foremost, distrust was caused by a reinvigorated Germany in the centre of Europe. In this context, the then president of the Soviet Union, Mikhail Gorbachev, and the US-president at that time, George Bush senior, played major roles in allaying these worries. While Gorbachev realised that he could not impose dictatorship on the satellite states of the Soviet Union, his policy of “glasnost” and “perestroika” eased the way for the GDR to follow the path of a peaceful transition to democracy. By claiming the admission of a united Germany in the security structures of NATO, George Bush senior managed to convince both François Mitterand and Margaret Thatcher, who had been sceptical to German unity, to accept that history will move on. Dr. Joachim Heidorn described the German reunification as a historic process in the German history that had necessarily to be based on a consensus among the divided Germans and its neighbouring countries.

Prof. Dr. Peter Uecker opened his presentation entitled “Economic Preconditions of the German Reunification: On the Success of the Social Market Economy” by a brief personal review on the experiences and memories during “the Wende” and the collapse of communism in Europe. As a German who was born and raised in his early years in the eastern part but moved to West-Germany when he was still a child, he had experienced both parts of the divided country. Therefore, the German reunification and its 20th anniversary triggered particular positive feelings and memories. With regard to the coverage of German reunification, Prof. Dr. Peter Uecker emphasized that one image alone could never tell the whole truth wherefore it is always required to support the institution of the university as to foster the plurality of opinions and freedom of speech. After the division of Germany was sealed in 1949, fierce discussions in the Federal Republic occurred around the question which socio-economic order should be established. Finally the idea of a social market economy prevailed. As early as in 1953, the economic shortcomings of the state-directed economy in the GDR became evident. The deficiencies within the system became obvious by an increasing brain drain from the GDR, an emigration of high-qualified workers and specialists, which in turn contributed to the aggravation of the economic situation. At the end of the 1980s, bad living conditions provoked increasing protests for freedom, democracy and an overall improvement of the economic situation. After the iron curtain in Europe had fallen with the breakdown of the Berlin Wall on November 9th, 1989, the German reunification on October 3rd, 1990, established the system of social market economy throughout Germany.

In the course of his speech, Prof Dr. Peter Uecker contrasted the features of a state-directed economy with the attributes of a social market economy. A comparison of two different socio-economic models should always start with the examination of who decides what, where and by whom goods are to be produced. In a system of state-directed economy, it is the “neutral state”, which is destined to act as a “benevolent dictator” to prevent an exploitation of the weaker by the stronger. The state is thus considered as an institution that is free of any orientation towards profit maximization, a feature that distinguishes it from the individual. Therefore, capital, goods and services should not rest in the hands of the individuals. In a market economy, on the other hand, the best of rivaling individuals will finally win the competition. As a precondition for a working market economy, Prof. Dr. Peter Uecker emphasized the feature of freedom as indispensable, which in reverse is strengthened as a result of this economic system. In the following, Prof. Dr. Peter Uecker reported on the real impact and consequences of the state-directed economy for its citizens in the GDR. With regard to effectiveness and efficiency, the state-directed economy fell considerably short of states with a market-based economic system. The desolate economic situation was primarily owed to a lack of internationally competitive goods and was reflected in an insufficient supply of consumer goods as well as a steady rising public debt. Since the political authorities in the GDR could not find any means to improve the economic situation in a sustainable way, they were forced to accept the financial help of its “class enemy” in the west, the Federal Republic of Germany. Prof. Dr. Peter Uecker said that a system of state-directed economy always requires information that no state is able to state precisely. By using the example of the former GDR-company “Trabant”, he illustrated that a single bankruptcy would have implied the bankruptcy of the whole system, which is why the regime never acknowledged it. Finally, the ongoing loss of trust in the problem-solving skills of the state strongly contributed to the collapse of the GDR.

Prof. Dr. Peter Uecker closed his presentation by linking the economic deficits of the state-directed economy with the practice of political repression within the GDR. The lack of private freedom, freedom of speech, choice and right to travel was at all times connected to the fear to be under state supervision. The mass movements in 1989, which took place under the famous slogan “Wir sind das Volk” showed quite plainly that the balance between the citizens and their government was finally dwindled away. In the end, the combination of the economic misery and political repression led to the fall of the Berlin Wall. The western part of the country was presumed to be a place of prosperity where different opinions, various parties and economic freedom were possible. 20 years after German reunification it has become obvious that there is no alternative to a system that gives top priority to the preservation of freedom and citizen rights.

The event “20 Years German Reunification, 20 Years End of the GDR Regime”, which was jointly organized by the Goethe-Institute, the University of Jordan and KAS Amman was received with great interest, particularly among high-ranking representatives of Jordan, figures affiliated with Germany and also Jordanian students. It showed that this exceptional event in German history has not lost a dreg of its meaning up to date. Furthermore, the curiosity on German history and culture could be witnessed at the photo exhibition, the presentation of the movies from the GDR and also the concert. With this event on the 20. anniversary of German reunification KAS Amman succeeded in informing the mainly Jordanian participants about the life in the GDR and the process that finally led to the reunification of the divided country. At the same time, KAS Amman raised the level of attention for its work in Jordan among young academics. With the ambassador of the Federal Republic of Germany to Jordan, H.E. Dr. Joachim Heidorn, the highest representative of Germany in Jordan oversaw this successful event. 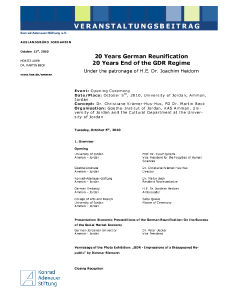