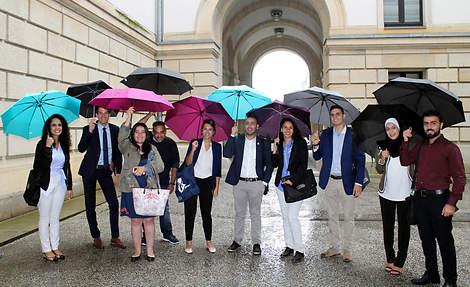 The dialogue program for a group of young politically engaged talents from Jordan has been completed last week in Berlin.

The promotion of Jordanian civil society and political engagement is a major priority in the projects of the Konrad-Adenauer-Stiftung in Jordan. The aim is to contribute to the fostering of democracy in Jordan. Two thirds of the population in Jordan is under 30 years old. However the last parliamentary elections in September 2016 were showcased by a low turnout, particularly from young voters.

Additionally, a considerable amount of young people are disillusioned about their future in Jordan due to a lack of employment opportunities, reinforcing the all too common problem of “brain drain”. In this light it becomes even more important to counteract these developments and motivate young members of society to participate in the political and social discourse.

The aim of the dialogue program is to give the young representatives the opportunity to deepen their knowledge and foster skills with respect to the political system in Germany and the role of civil society. Furthermore, the participants are offered a platform to exchange experiences, discuss challenges and explore potential topics for cooperation in the context of politics and civil society. The participants are members of NGOs and political initiatives as well as journalists and activists from Jordan.