On May 19th, KAS Amman in conjunction with the Lebanese Center for Policy Studies held a closed roundtable discussion that brought academics and experts together to discuss “The Arab Uprisings: Domestic Consequences and International Reactions.” Panelists tackled issues including the future of Euro-Mediterranean relations, the potential trajectories of Arab regimes, and the international perceptions of the Arab Spring.
June 2, 2011 Ordering Information

Keynote Address: What Should and Could the European Union do in light of the Arab Uprising? Some Reflections

The Euro-Mediterranean Partnership (Barcelona Process) marked the beginning of the European Union’s active foreign policy towards the Middle East. The Barcelona Process was intended to promote democracy, human rights, and good governance within the Arab World. Yet the Euro-Med Partnership yielded few results and left the E.U. cooperating with authoritarian regimes in the region instead of forwarding the values of the partnership. The recent Arab uprisings provide the European Union with an opportunity to cooperate with partners who share the same values. In his keynote address, Dr. Martin Beck, Regional Representative of Konrad-Adenauer-Stiftung, addressed the question: what could and should the European Union do in light of the Arab uprisings?

Throughout the 1950s and 60s, Great Britain, France, and Germany were the three most influential foreign powers in the Middle East. French assistance with the Israeli nuclear program along with the French legacy in Algeria cost France its legitimacy in the Arab World. Germany’s colonial aspirations were halted after WWI. Seeking to reintegrate with the West, Germany met American expectations and reconciled with Israel in order to achieve this aim. Germany’s subsequent steadfast support for Israel has cost its favorable position in the region. Great Britain, the most prominent of the colonial powers, left a legacy which delegitimized any role it might play as a shrinking empire.

Michael Young of the Daily Star contributes his thoughts to the discussion.

In the 1960s and 1970s, the United States took over as the most influential external power in the Middle East. Meanwhile, in order to regain status in the region, Europe took on a soft-power approach to the Middle East that followed two tracks. The first track focused on the Palestinian-Israeli conflict while the second track took the form of the European-Mediterranean Partnership. With the first track, the European Union hoped to reassert itself in the Middle East by sponsoring the peace process between the Palestinians and the Israelis. In 1980, the nine members of the Economic Committee of the European Economic Community (EEC) and the Palestinian Liberation Organization issued the Venice Declaration which called for the acknowledgement of the Palestinians’ right to self-determination and the PLO’s right to be integrated into the negotiation process. The weakness of Europe meant that the success of its policy was confined to the declaratory level.

The second track, known as the Barcelona Process, sought to establish a cooperative relationship between Europe and the Arab World based on common values such as democracy, peace, and human rights. However, in the decade after the Barcelona Process, little progress was made towards the mutual values set out in 1995. Europe was unable to pressure Israel sufficiently. The special relationship between the United States and Israel provided Israel with an unwavering ally but no incentive to make concessions.

Europe’s lack of progress in its foreign policy towards the Middle East can be attributed to two factors. First, Europe was simply not ready to apply the pressure needed for a Palestinian state. Second, Europe did not adequately understand the inherent contradiction between stabilization and democratization.

The recent Arab uprisings have opened the door for Arab-European cooperation based on the values of the Barcelona Process. While comparisons have been made to the 1989 revolutions of Eastern Europe, the E.U. response to the Arab Spring will be fundamentally different. In the case of Eastern Europe, the European Union was ready to offer the incentive of EU membership to the democratizing nations to establish rule of law and democracy. However, Europe is not equally prepared to offer similar incentives to the Arab world in order to work towards democracy.

Considering the context of Europe’s relationship with the Middle East, Dr. Martin Beck posed these questions for discussion:

1. To what degree is it necessary to come to terms with European-Mediterranean history?

2. Should Europe provide the Middle East with political support such as expertise or will this be considered imperialist in nature?

3. Should Europe seek to contain authoritarianism in the Arab World and, if so, how?

4. How should Islamists be dealt with?

6. How could Europe be convinced to recognize a Palestinian state?

7. Should Europe pursue joint European-American initiatives in the Middle East?

The discussion following the keynote address sought to tackle these questions and provide suggestions for E.U. foreign policy towards the Middle East in light of the Arab uprisings.

Throughout the following discussion, panelists offered a number of suggestions for European involvement in the Arab world including the following:

1. The E.U. needs to reject a one-size-fits-all policy in the Middle East and instead tailor policies to individual Arab states.

2. Europe should assist the process of democratization through institution building, particularly on the local level, and by bolstering confidence in economic institutions.

3. The E.U. needs to revise its temporary migration laws to accommodate refugees from the Middle East and North Africa.

5. Europe should pressure authoritarian regimes in the Arab world to honor the treaties and agreements to which they are signatories.

The first in a series of closed discussions exploring the Arab uprising and its economic and political implications for Lebanon, this roundtable, moderated by Mr. Sami Atallah focused on three questions:

•What are the causes of the uprising? Why now? How is it different from previous revolts?

•What type of regimes will emerge? What factors will determine the outcome? What are the envisioned scenarios?

•What will be the role of the international community in light of its interests in the flow of oil, protecting Israel, fighting terrorism, and halting migration? What ought to be its reaction towards the uprising?

What are the causes of the uprising?Dr. Richard Khuri of the Lebanese American University adds a philosophical and cultural perspective to the roundtable discussion. On the left, Dr. Paul Salem.

In addressing this question, panelists identified a number of factors that led to the outbreak of the revolutions in the Arab world. To begin, discussants noted that the need for revolutions in the Middle East has long been present but that the coalescence of factors triggered the onset of the uprisings. Participants highlighted the failure of the social contract between the governments and their populations. That is, the states failed to satisfy the demands of

their increasingly young populations for education and employment leaving the youth disenfranchised and marginalized. Several panelists pointed to the psychological implications of the Tunisian model. Tunisia’s quick, successful transition to democracy gave other Arab populations hope that their countries could make similarly successful transitions. Participants also stressed the importance of ideas in fomenting the Arab uprisings. The desire for concepts such as freedom and democracy did as much to spur the uprisings as the political and economic elements.

What type of regimes will emerge?

Within these scenarios, discussants debated the future of Islamist parties in the emerging regimes. On one side, participants believed that Islamist parties would become more centrist in order to meet the demands of the citizens. Conversely, other panelists posited that, once in office, Islamist parties would find it difficult to deliver campaign promises and would therefore resort to cultural and religious means of maintaining support, i.e. through Islamist and Arab rhetoric. In a combination of these two theories, discussants stated that the size of the party could dictate which way it would go. Smaller parties might tend to be more radical in order to gain popularity while larger parties would need to deliver social services and jobs to garner votes.

For the final question, moderator Mr. Sami Atallah narrowed the discussion to the question: How are external powers (particularly the United States) perceiving the uprisings? Within this question, two main themes emerged. The first of these themes was Syria and its strategic importance to Iran. If Syria becomes democratic, Iran would lose access to Lebanon and Palestine. This flip would change the balance of power in the region. A second theme that emerged from this discussion was that of the accountability of external powers in the Middle East. Participants believed that Western allies should be held accountable for their policies and actions in the Arab world. 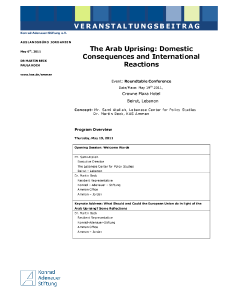