The Arab Uprising and its Economic Implications on Lebanon

On June 24th, KAS Amman with the cooperation of the Lebanese Center for Policy Studies held a closed roundtable discussion that brought experts together to discuss “The Arab Uprising and its Economic Implications on Lebanon”. Panelists tackled Lebanon economic particularities in light of many factors and the recommendations to overcome the tough economic period.
August 24, 2011 Ordering Information 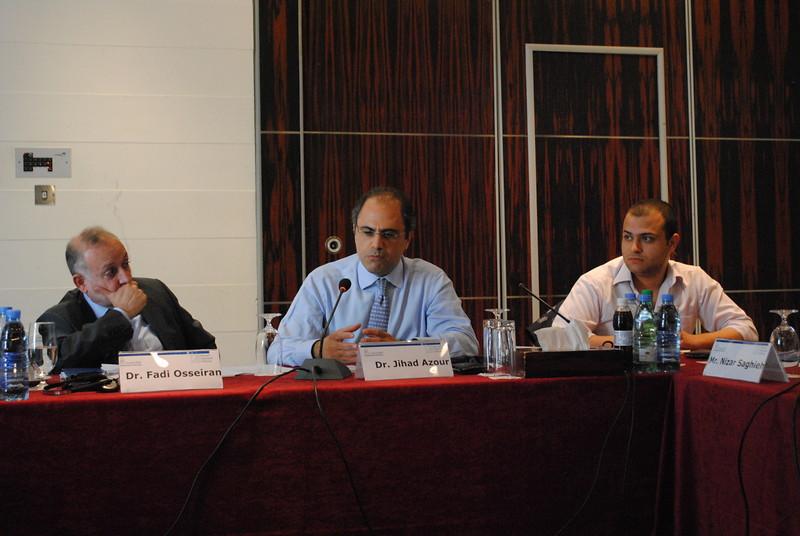 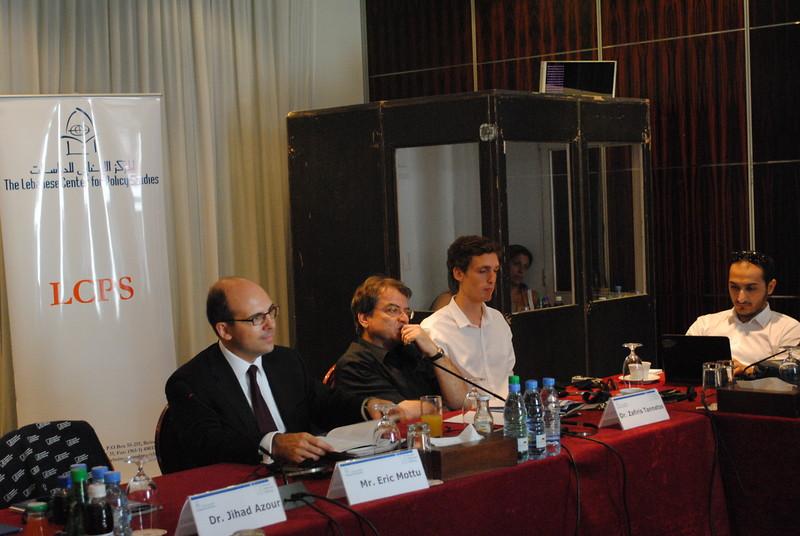 Participants of the roundtable discussion

Roundtable Discussion: The Arab Uprising and its Economic Implications on Lebanon

Senior Advisor for the Arab States

The fourth in a series of closed discussions exploring the Arab uprising focused on the economic implications on Lebanon. Mr. Sami Atallah moderated the session and led the participants through the following questions:

1.What are the current consequences of the Arab uprising on Lebanon’s economy and its various sectors?

2.What are the challenges and threats that the political changes will have on Lebanon’s economic role in the region? How can the Lebanese government respond to these challenges?

3.What are the economic opportunities that may arise as a result of this uprising and how can the government capitalize on the political reforms in the region?

During the changes in the Arab World in the 50s and 60s, Lebanon appeared as an island of economic freedom, banking secrecy and liberalism. It was characterized by an important middle class. A Lebanese way of democracy existed, whilst an interventionist model was implemented in countries such as Egypt, Syria, Algeria, Iraq and Libya. Also, at that time, tourism was not such an important sector within the Lebanese economy.

Still, in the last ten years, Lebanon’s banking sector has benefitted from turmoil abroad, especially post 9/11 and during the 2008 financial crisis. Indeed, these crises happened in other parts of the world and Lebanon appeared as a safe haven for capital. American and European banks were perceived as shaky, whereas the Lebanese banks remained stable, well capitalised and conservatively managed. Today, however, Lebanon is not seen as a place with a unique liberal economy anymore especially since the regulation of banking secrecy has increased.

In 2011, there has been a loss in economic output. Growth has decreased from 8-9% (January-March 2010) to 2-3% growth for the first quarter of 2011. The International Monetary Fund (IMF) was already expecting a decline in growth before the political turmoil started but the recent events made growth even more volatile. Also, unemployment rose to 10.5-11% for the last quarter of 2010 and although data for 2011 are not yet available, the Central Agency for Statistics (ACS) predicts a rising trend.

Lebanon stopped being seen as a major target for investment due to the current instability in national politics and in terms of security. Indeed, the effects of the Arab uprisings on Lebanon have been particularly acute, because they coincide with a domestic instability unrelated to the uprisings. It is therefore difficult to discern the particular impact of the internal causes as opposed to the impact of external events on the Lebanese economy.

Lebanon is an open economy that depends on the movement of people and capital. Both are affected by the uncertainty and the turmoil in the region. During previous economically rough periods, Lebanon always tackled the loss of confidence by the fact that the area around Lebanon was stable, but now it is compounded by that fact. To avoid that loss of confidence, Lebanon is trying to distance itself from the Arab uprisings, putting forward its way of democracy, but the success remains quite limited.

Oil prices are increasing due to the current uncertainty in the Middle East while the wheat price is skyrocketing. The Lebanese government responded by increasing its subsidies on food and gasoline prices, which then affected budget and public debt. The lack of a consumer price index in Lebanon makes it, however, difficult to estimate the price increase for major food items, but economists assume that food price inflation is higher than the global average.

As for the human capital, Lebanon has seen a decrease in its tourism sector, as there has been a clear slowdown in visitors since the beginning of the Arab Spring; this added to other negative factors such as the various security incidents that took place in 2011 in Lebanon, particularly the kidnapping of seven Estonian citizens. Indeed the part of Saudi visitors, with expenditure that is 3-4 times larger than average, has diminished from 7.5 % in 2010 to 4% in 2011, whereas the share of Iranian visitors characterised by low expenditure has increased. In the end, it appears that there is a 20-30% decrease of touristic activity, which could reduce growth by 0.5-1%.

The decrease of foreign direct investments (FDI) and the rise of commodity prices are deteriorating governmental finances. The labour market is not seeing any amelioration, as on the low end there is competition of unskilled workers from neighbouring countries and at the top end Lebanese leave to work abroad, where they find better employment. However, a possible influx of wealthy refugees from countries in crisis might bring change, comparable to what happened in Jordan during the Iraq war.

The uprisings also have a monetary impact on Lebanon. The central bank is trying to keep interest rates low and as stable as possible, but it had to intervene at the beginning of 2011 by selling dollars on the open market. Banking, which constitutes the back bone of the Lebanese economy, is becoming more and more fragile and the recent affair concerning the Lebanese Canadian bank, which was accused of money laundering, has reduced trust.

From the Arab uprising, it will mostly be Syria’s fate that will have an impact on Lebanon, as the two countries are historically and economically linked. Indeed, investment in Syria has gone down and trade has been affected. Although foreign investors might see Lebanon as a surrogate for investment in Syria, the uncertainty has slowed down FDI in Lebanon. Also, the economic sanctions that have been imposed on Syria by the international community might have negative impacts, as Syrian capital is being transferred to Lebanese banks and Lebanon would be the next in line for sanctions from the international community. The events in Syria might also affect the balance of power in Lebanese politics, as parties supported by the Syrian government might lose that support in the future. This might reflect on the economic agenda of a future government.

Another problem Lebanon is facing is the fact that Dubai appears as a safer option than Lebanon in terms of banking and investment. Indeed, since its revival from the financial crisis, the emirate has been receiving an increasing amount of capital from other Arab states such as Egypt and Syria.

However, countries of the Gulf could also act as a counterforce to the economic problems Lebanon is now facing. Indeed some Gulf countries are benefitting from the high price of oil and the revenues are used to respond to social demands. Especially in Saudi Arabia the population has been receiving a considerable amount of money in the form of grants and bonuses, some of which might be spent in Lebanon, but it will hardly be enough to balance out the negative impacts of the crisis. Also, a worry is that Saudi Arabia might reduce its support to Lebanon, if Hezbollah is part of the government.

Economic policies in Lebanon clearly face implementation problems. Indeed, the projective budget for 2010 has been decided upon, but has not been ratified and the public investment seems to be below what had been decided, especially when it comes to investing in telecommunications, infrastructure and energy, where a lot of funds are needed. For example EDL, the electricity state company has had no accountability since 2004. Also, recent policies, such as the increase of subsidies, are untargeted, costly and have not solved anything.

It is also necessary to boost the private sector through abolishing monopolies, privileges and licences in order to promote competition. Accountability should be increased while corruption should be reduced. Therefore, clear reforms in the business sector for more openness, more transparency, and better governance are needed. The high technology service sector, which is booming in other countries in the region, is rather modest in Lebanon, simply due to the lack of infrastructure.

All participants also agreed that a social agenda was a top priority in order to build a stable economy. There is a need for social safety nets and automatic stabilisers, such as social assistance, pensions, and unemployment assistance. Lebanon is the richest non-oil country of the Arab World and, nevertheless, it has no pension system, but merely an ‘end of service indemnity’.

Thus, improvements should be made in three major sectors: in information and communication technologies, in services such as electricity and transportation as well as in education, which should be reformed in order to fit market demands.

The closed discussion proved itself to be a success and gave all participants fruitful new insights on the implications of the Arab uprisings on Lebanese economics. It became clear that the turmoil in the region has made economic but also social reforms in Lebanon more important than ever and that strict and diligent implementation is necessary.

Konrad-Adenauer-Stiftung - Amman Office and the Lebanese Center for Policy Studies thanked all participants and both are looking forward to further cooperation. 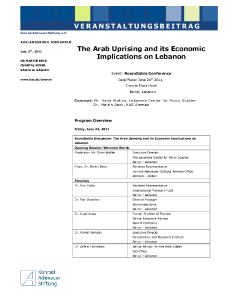 The Arab Uprising and its Economic Implications on Lebanon (Pdf)
Download