The Media and its Role in Monitoring the Municipal Elections

On October 22nd, KAS Amman in cooperation with First Media Company held a roundtable discussion that brought experts together to discuss "The Media and its Role in Monitoring Municipal Elections". Panelist tackled questions of competency of municipalities, transparency and integrity in municipal elections and the power of media in fostering positive change in the administration of elections as well as in the public perception of elections.
November 19, 2011 Ordering Information 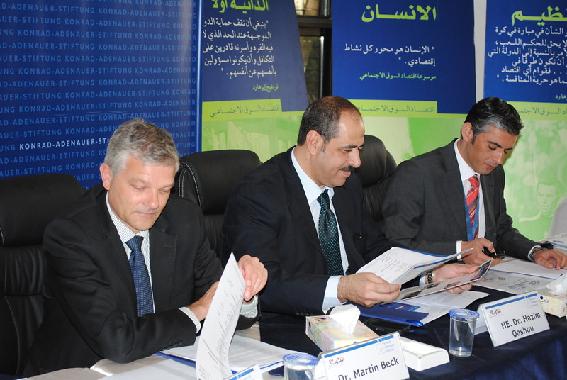 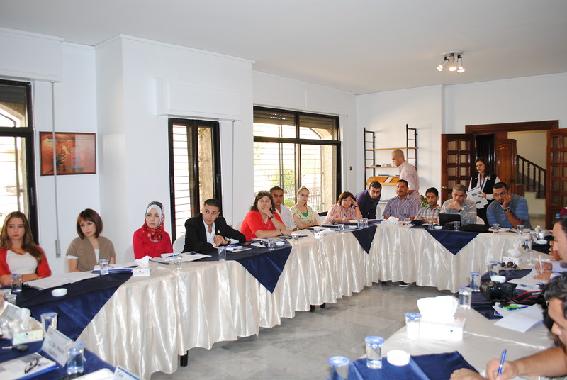 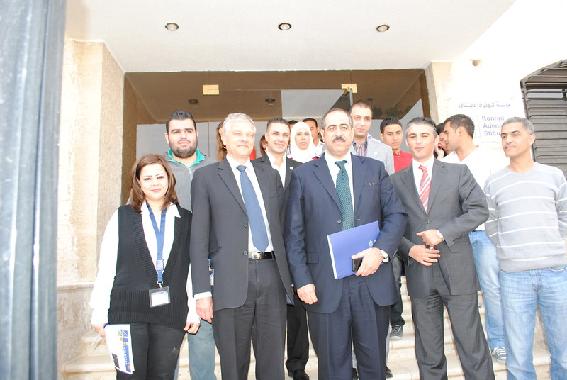 Third Session: The Media and its Role in Monitoring the Municipal Elections

According to the media and partisan sources, the election process in Jordan is a target for harsh criticism: fraud, government interference for personal gain, and low voter turnout are characteristic occurrences. The above makes it imperative for the Ministry of Municipalities to clarify and raise awareness about how the next election will be conducted and improved, especially with the presence of observers, specialists, and journalists. The role of the media and observers is crucial in monitoring the upcoming elections and confirming whether or not the government has taken adequate steps to prevent a negative electoral process.

This workshop, “The Media and its Role in Monitoring the Municipal Elections,” organized by the Konrad-Adenauer-Stiftung Amman and First Media Company, and patronized by the Minister of Municipal Affairs, HE Dr. Hazim Qashou’, aimed to examine the operation of the electoral process and the dynamics surrounding it. These factors included preparations made by the government, the media’s reporting with integrity and impartiality, and the role of observers. The meeting was attended by distinguished groups of young people that work in various political fields who are committed to promoting political participation. In addition, politicians and officials of Jordanian ministries, journalists and media professionals, as well as students of the School of Journalism and Media from various Jordanian universities were in attendance.

Mr. Maher Madieh, Director of the First Media Company, welcomed the participants and discussed the role of electronic media. He acknowledged that it is evolving at a dramatic rate, and has taken a prominent place in politics due to modern technological development. He added that, with accessible information on technology communication, the average citizen is capable of having a key function in politics. The individual is able to express their opinion, criticize, or assess policies made by government officials.

Dr. Martin Beck, Resident Representative of the Konrad-Adenauer-Stiftung Amman, stated media plays an important role in modern societies and is viewed in democratic systems as the fourth power.

He added that the upcoming municipal elections have great political importance for Jordan, particularly as they come amid considerable controversy about the extent of democracy and freedoms in the country. The success of these elections is fundamental to the success of Jordan’s efforts towards decentralization.

HE Dr. Hazim Qashou’, Minister of Municipal Affairs, said at the opening of the workshop, “Media should be considered the first authority and not the fourth as it is known, because of its effect on monitoring all decisions that are passed by the government and especially the laws related to parliamentarian or municipal elections.” He emphasized the importance of media in an era where it is one of the most powerful and influential tools in shaping policy.

In his discussion about the upcoming municipal elections, HE Dr. Hazim Qashou’ explained the mechanisms adopted by the previous government; from the preparation of electoral laws to voter registration. He expressed his full satisfaction in the large turnout of citizens during the registration process. It was gratifying to see people intending to exercise their democratic right in choosing the future members of the municipal councils.

HE Dr. Qashou’ emphasized the need for municipalities to be the units of development that promote cooperation and investment from the private sector and the community. In his answers to inquiries about the quota of women in government, transparency, and integrity of the elections process he said, “The increase in the proportion of women in municipal councils came after extensive study that confirmed a reality, wherever we find women, the rate of corruption is less.” He continued, “Integrity and transparency of elections are guaranteed by the existence of independent commissions headed by judges who are highly experienced in the elections mechanism and as a new electronic system is going to be implemented, the ratio error of the results is zero.”

With regard to the process of the separation of municipalities, HE Dr. Qashou’ confirmed that the decisions of separation were not consistent with Article V of the Municipalities Law. Rather, they were decisions made by the Council of Ministers whom had been granted the right to do so. He added that these decisions were being studied by the ministerial committee, formed for this purpose. HE Dr. Qashou’ concluded by underlining the poor state of municipalities, noting they suffer from huge debts due to inflation, random appointments, and lack of investment and development projects. He also recalled that a third of this debt is from the Greater Irbid Municipality alone.

During the second session, Dr. Sakhr Al-Khasawneh, a lawyer specialized in media and publication issues, talked about ethics in journalism. He affirmed that media has become a market of various goods and the audience is now able to distinguish and judge the quality of goods produced. He highlighted that it is impossible to live without free media, and that media power reflects the will of the people, ensuring fairness. Without it there would be no control on any electoral process whatsoever. In addition, he referred to Article 23 of the Anti-Corruption Law and stated that if it is adopted, freedom of opinion and freedom of expression will be practically abolished.

Dr. Khasaweneh concluded his statements by alerting journalists of the necessity of searching for the truth before publishing any news. He urged them maintain neutrality when covering stories related to the election process, because their role is to impart the truth about the events at the polling stations.

Third Session: The Media and its Role in Monitoring Municipal Elections

At the end of the meeting, Mr. Imad Nuseir, journalist from Jordan Radio and Television, said that the elections indeed form a suitable occasion for citizens to choose the most appropriate and best suited people to make policy. Participation in these elections is the people’s duty and part of the process towards positive change. He said that media is responsible for following-up the electoral process in all stages until the final results are attained. In order to do so, media has to be free and fair.

The joint workshop of the KAS Amman and the First Media Company, patronized by Dr. Hazim Qashou’, was successful in raising awareness among young people to motivate their participation in politics. The turnout of participants, especially young journalists, is indicative of its success. It illustrates the increased importance of media for politics as it makes politics easier accessible to youth, thereby fostering interest in political debate. Modern media is evolving at an ever accelerating pace and now highly impacts public opinion. It is thus essential for governments to take account of these developments. The major themes concerning governmental preparation for elections were the questions of competency of municipalities, transparency, and integrity, as well as women’s participation in elections. The panelists all evaluated the influence of media positively in increasing transparency of electoral processes and enabling accountability of governmental agencies for electoral procedures. It was also commonly held that municipal elections are important for the achievement of democratic ideals, but that often municipalities encounter problems in administering elections. KAS Amman and the First Media Company provided a solid foundation for follow-up workshops of a similar kind. As advocates of decentralization and public participation in the policy process, this workshop was a successful effort in bringing politics closer to the people.

The joint workshop of KAS Amman and the First Media Company received a high coverage from national media. It was covered by several renowned daily newspapers. A report on the press coverage can be found at: http://www.kas.de/jordanien/en/pages/6609/ 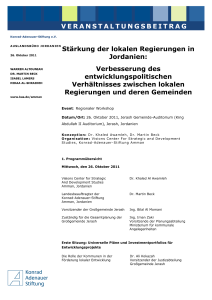